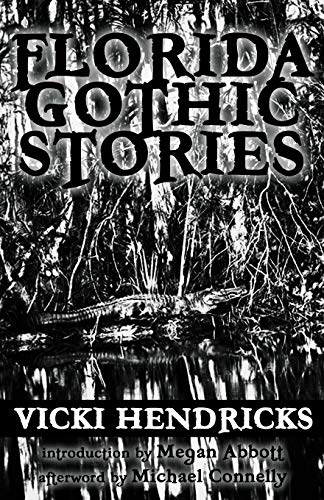 In Florida Gothic Stories, Vicki Hendricks has crafted some near-perfect gems of noir—taking noir’s twisty characters and plots and twisting them even further in imaginative and surprising ways.

The word gothic also describes these stories—surreal, grotesque tales of violence, decay, and desperation, in the tradition of Southern writers such as Faulkner and O’Connor.

For example: A four-foot-ten ex-con burglar. Siamese twins, as one is having sex. A guy named Waxman in love (platonic) with an iguana. A crack whore who decides to murder her wealthy twin and take over her life. It goes on.

In the story “Boozeanne, Lemme Be,” Junior is the tiny ex-con, small enough to use crawlspaces to burgle houses. He decides to live in one of the houses—owned by Bob and Melodie—staying there when the couple is at work. Junior meets a boozy broad nicknamed Boozeanne. And readers see Hendricks’s skill at describing sex, whether steamy, uninspired, or crassly manipulative: “I poked into her soft gut and jelly thighs a few times, and then I located that sweet spot you don’t never forget.”

Junior takes Boozeanne home while Bob and Melodie are on vacation. The two live a romantic idyll, until Boozeanne sees the chance for a major score at the expense of the owners. But then the troubles, the mishaps, the surprises begin.

Another story, “Must Bite!” has one of the all-time best noir openers, narrated by exotic dancer Darlene:

“I thought I’d seen everything and survived it—and I was fucking sick of it. I’d been dancing in Key Largo for four years, since age twenty-one, and men were nothing but work for me. I enjoyed women’s company better—but since women were a deadend economically, I was looking for a dick with major dollar signs flashing. I was ready to pack up for Miami because summer in the Keys was such poor pickings. Then came my lucky night, the night Rex turned up. Sleaze, the manager came into the club dressing room to get me . . .”
Hendricks puts readers firmly into the Florida setting: “When I came out a little after two, it was raining and smelled like a jungle, musty and thick, mosquitoes swarming the light under the awning, waiting to bite, tree frogs with their creepy grunts.”

Rex takes Darlene to his place, where, to her surprise, he lives with a houseful of monkeys and an intelligent, domesticated ape—all left by his ex-wife.

At first, life is great—and sexy—for Darlene and Rex. They eventually marry, but Darlene soon becomes bored and resentful. She wants to kill Rex and collect on his insurance policy. In a typical Hendricks twist, she enlists one of the “pets” to help her murder Rex. The story proceeds to an ending that’s grotesque almost beyond imagination. Steel yourself for some rough stuff.

Another of the stories, “Gators,” is a near-perfectly crafted noir tale. “It was a goddamned one-armed alligator put me over the line. After that I was looking for trouble.” That’s Virginia, trapped in a hateful marriage. The gator and the sight of a one-armed woman make Virginia realize that her husband Carl is draining all joy and hope from her life: “He might take an arm first, or go straight for my soul.”

Virginia decides to manipulate Carl into killing his brother-in-law back in Texas, hoping to ensure that he gets caught. The brother-in-law treats Carl’s sister abusively—but not as abusively as Carl treats Virginia. Virginia plays on Carl’s demented self-image as a protector of women. Virginia, as do Hendricks’s other femme fatales, botches the plan and arrives at that horrifying moment of oops: “I didn’t think of that!”

But Hendricks’s writing is so gripping that readers likely “didn’t think of that” either.

“Gators,” and other tales in Florida Gothic Stories tell of abused women and their desperate efforts to reach out for something better, using sex, manipulation, murder, flight, and a crafty twisted perspective on life.
Yet traces of goodness show through—in indecision, regret, guilt, surrender.

But maybe not so beautiful. The characters often sink to the depths of their abusers. There’s ugliness in the murder, revenge, scams. There’s ugliness in the manipulative lovemaking. Ugliness is also found in the passive-aggressive way that one character murders her husband. Yet ugliness is a part of life that noir uncovers, reminding readers that they may not be so far removed from at least traces of the lives Hendricks portrays.

By the end of Florida Gothic Stories, readers might wonder about Hendricks herself. Where does she get these stories? Does she know the characters? Has she had these feelings and experiences?

And by evoking such feelings, Hendricks demonstrates the dark power of her stories—enough so to make readers excited at the thought of moving on to her acclaimed noir novels.