Flora and Ulysses: The Illuminated Adventures 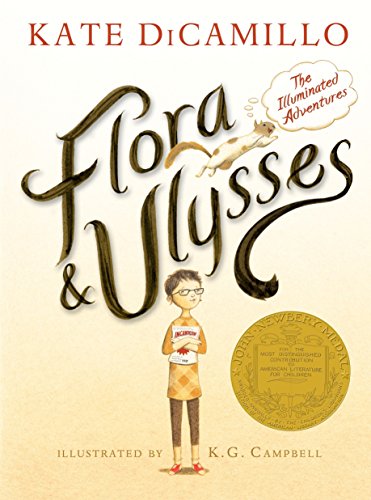 “. . . should fly off the shelves and into the waiting hearts of young readers.”

“There is just no predicting what kind of sentences you might say, thought Flora. For instance, who would ever think you would shout, ‘You’re going to vacuum up that squirrel!’?”

Despite Flora’s warning, the next door neighbor did indeed swallow a squirrel with her powerful new Ulysses 2000X vacuum cleaner. That bizarre accident serves to launch a unique novel—and to transform its characters’ lives.

The acclaimed author of beloved children’s books (The Tale of Despereaux, Because of Winn-Dixie), Ms. DiCamillo once again serves readers a rich banquet dripping with choice words, seemingly random combinations of outsider characters, wise asides, and an irresistibly endearing animal.

In Flora & Ulysses we meet a ten-year-old self-proclaimed cynic who is on guard all the time; after all, the unexpected could happen any moment. In the aftermath of her parents’ divorce, Flora retreats to her bedroom, where she can revel in her beloved, predictably thrilling detective comic book series, The Illuminated Adventures of the Amazing Incandesto!

As a result, Flora knew superheroes “were born of ridiculous and unlikely circumstances: spider bites, chemical spills, planetary dislocation, and, in the case of Alfred T. Slipper, from accidental submersion in an industrial-size vat of cleaning solution called Incandesto!” She is thus equipped to handle the case when the squirrel she saves (in a hilarious scene in which she administers CPR to the rodent) somehow transforms into a super squirrel.

She arrives at the perfect name for her new companion: Ulysses. The squirrel shows himself to be super strong—he lifts the vacuum cleaner to devour the crackers! He can fly! He can even understand what Flora says to him.

In charming short chapters, readers gain insight into the squirrel’s fantastic transformation. “His brain felt larger, roomier. It was as if several doors in the dark room of his self (doors he hadn’t even known even known existed) had suddenly been flung wide.”

Just how large is that rodent’s brain? Suspense builds as Flora and next door neighbor and fellow outcast William Spiver watch Ulysses in action at the typewriter where Flora’s self-absorbed mom writes her vapid romance novels.

“It was beautiful to the squirrel to see a letter appear out of nowhere.” One letter leads to another, and suddenly, the squirrel composes a funny little poem, confounding William Spiver’s expectations and confirming Flora’s assessment that Ulysses is a squirrel magnifique and a squirrel to keep, despite her mom’s disapproval.

At such key dramatic events, illustrator K. G. Campbell provides delightful, expressive pencil drawings that highlight the quirky circumstances of this high-flying fantasy. On top of those visual enticements, the novel sparkles with perfectly placed changes in fonts: comic-book–like fonts for the words of the Amazing Incandesto, an old-fashioned typewriter font for Ulysses’ poems, and numerous comic-book panels with bubbles containing dialogue in all caps.

Within the span of just a few days, Flora and the squirrel travel a great distance as the author treks those strange beating things we call hearts. Flora’s isolation and pessimism shift to a worldview where companionship and new perspectives can enter.

In the aftermath of proclaiming her mother an archenemy and announcing she wants to go live with her passive, comic-book loving father, she discovers her mother, despite her shortcomings, actually does love her.

Who would have predicted one superhero squirrel could lead a child to such crucial inner growth, to forgiveness, to hope? As Flora would say, Holy bagumba! Here’s a novel that should fly off the shelves and into the waiting hearts of young readers.