Flirting with Disaster (The Charleston Trilogy) 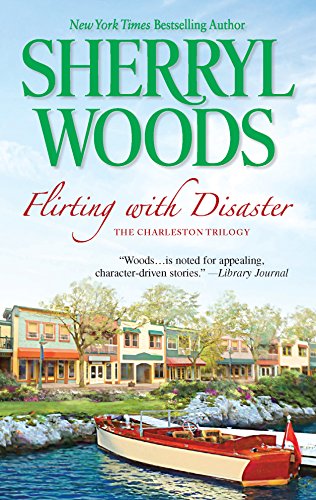 “Ms. Woods does get her point across: More often than not, the heart does indeed rule the head.”

The South Carolina low country is the setting for this second novel in Sherryl Woods’ Charleston trilogy. We are introduced to Maggie Forsythe as she escapes her home to hide out on Sullivan’s Island. She is licking her wounds after being jilted by Warren Blake—a well-respected psychologist who matched her parents’ idea of the perfect husband—just weeks before their wedding. Though Warren is dependable, he does not curl Maggie’s toes.

But does he have to be the one to realize their union would never work? Why is he the one who dumps her and bruises her ego instead of the other way around? A girl has her pride, after all.

Hiding away and gorging on Haagen-Dazs seems to be the perfect balm Maggie needs. Then her best friend Dinah Davis Beaufort, and her charming new husband, Cord Beaufort—a man who had once turned down Maggie’s advances—show up determined to drag her back to Charleston. They try to convince Maggie of her need to get back to Images, the gallery she owns, but their ploy doesn’t work. So they play on Maggie’s humanity and sense of good by persuading her to return to help with the building of a new home for a recent widow with three children.

Maggie reluctantly returns home where she meets Josh Parker, who is supervising the home-building project. When she sees something of a bad boy and aloof image in Josh, Maggie recognizes he is the type who does curl her toes. Add to this mix Josh’s estranged mom, Nadine, who shows up on scene after several years and decides to bring the two together—something they both rebel against.

Determined never to get involved with anyone again, outside of a harmless romp in the hay, Maggie calls on Josh when a crisis occurs. Josh, also deciding against a permanent relationship, soon realizes Maggie is in danger and knows he must rescue her.

Both Maggie and Josh possess profound insecurities that keep them single and independent. Can they overcome these uncertainties and get together or will they both be destined to live their lives aimlessly having shallow one-night stands?

An engaging and fun beach read, Flirting with Disaster is somewhat predictable, especially with regards to the actions of the characters of Nadine, Josh, and Maggie; nonetheless, Ms. Woods does get her point across: More often than not, the heart does indeed rule the head.