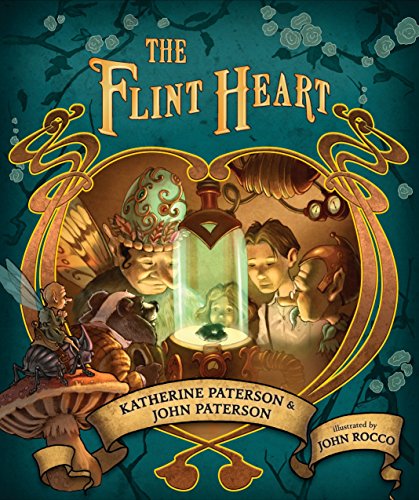 “The Patersons preface their work with a line by Eden Phillpotts: ‘The universe is full of magical things, patiently waiting for our wits to grow stronger.’ The Flint Heart is a bit of enchantment rescued for a new audience.”

In a fantasy shining with wit and wisdom, the corrosive effects of power take the shape of a heart made of flint in the Stone Age.

In those dark, long-ago days, a pernicious charm came into being when an ambitious man ordered a mystery man to make an object to help him defeat the tribe’s chief. In time, the charm was lost but remained potent.

The Flint Heart picks up speed as its setting shifts to the early 20th century, when the humble, loving Jago family lived on their farm in that same English countryside. If only the gentleman from the British Museum had not approached Billy Jago, asking him to dig for ancient bronze beneath Fur Tor. The kind father found nothing but an odd little stone—that quickly unleashes big trouble.

After 5,000 years of lying buried, the “Flint Heart in Billy Jago’s waistcoat pocket was bubbling away with wickedness, delighted to be at work again.” Soon Merripit Farm was no longer merry.

Katherine Paterson, a two-time winner of the Newbery Medal and the National Book Award, collaborates with author and husband John Paterson, in rewriting the overlooked fantasy The Flint Heart (Dutton, 1910) by Eden Philpotts.

Retaining the original plot and numerous droll insights, the Patersons display sprightly narration and rich characterization in their updated version sure to captivate those too young for Tolkien’s Lord of the Rings trilogy or C. S. Lewis’s Narnia series.

As with those beloved fantasies, these heroes are brave, often perceptive children who, with magical assistance, overcome seemingly impossible obstacles. In this case, Charles Jago, age 12, must rid the world of a “bright black heart with a hole right through it,” an object that will transform anyone possessing it into a cold, cruel dictator.

After Billy Jago sets about terrorizing his family and making enemies of everyone around, Charles calls his siblings together to discuss how to restore their father’s gentle nature. Charles is a likable protagonist, one “nobody took seriously except Unity and the baby, even though he was a great reader and probably had more brains than any of them.” His younger sister, Unity, also plays a crucial role, especially with her habit of wondering and delving more deeply into matters. It is she who suggests they seek the pixies to ask for their assistance.

Fairies, the authors point out, understand all languages. What a perfect opportunity, then, for the Patersons to call upon these tiny creatures to illustrate the power and beauty of words. In the fairy city, the children meet a fanciful poet and a fascinating leader with the odd, Anglo-Saxon-sounding name of Zagabog.

This wise fairy with eyes like telescopes is “old as the earth” and tells his guests a story to illustrate an important point. In his intriguing variant of Aesop’s fable of the tortoise and the hare, he reveals: “[A]lways look out for the Point of View and help other people to see yours, too, if you want them to understand you.” The sage understands the source of the Jago family’s problem is simply the Flint Heart, which obliterates one’s awareness of others’ feelings and viewpoints. Rather than offer their father a gift, the children must take away this object, he says.

On their way home, the siblings meet the third and most unlikely hero of this adventure: a German hot-water bottle. Illustrating the power of the number three and the fairy tale theme that appearances are deceptive, the once-discarded water bottle will prove to be a strong, resourceful hero. No doubt, he will elicit plenty of guffaws from readers, as well.

The preponderance of good natured rather than crude or snarky humor sets The Flint Heart apart from many modern novels for children. Even the villains, such as a maudlin Jacky Toad and a raccoon wearing a “tweed suit, a bowler hat, and a loud green-and-red tie,” are as pitiable as they are laughable. Zagabog’s mercy to them reflects his own accumulated wisdom, as well as the kind of insight that enlivens some of our most beloved fairy tales and fantasies.

This is one book that appears to be as good as it is. The design features a charming, old-fashioned-looking font called Manticore and utilizes double-spaced lines that make for easy reading. A generous amount of expressive, detailed illustrations done in graphite and colored digitally heighten the grand reading experience.

The Patersons preface their work with a line by Eden Phillpotts: “The universe is full of magical things, patiently waiting for our wits to grow stronger.” The Flint Heart is a bit of enchantment rescued for a new audience.