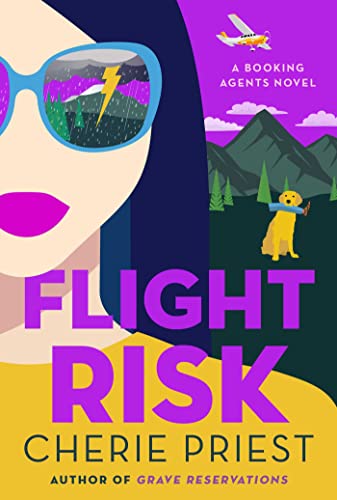 Author Cherie Priest in her latest cozy novel Flight Risk takes the cozy mystery down a somewhat different path. Unlike most cozies with the familiar one protagonist, female, and one floundering police officer, Priest presents her readers with a combination of two investigators combining their efforts.

Leda Foley, psychic and travel agent, and Grady Merritt, a Seattle Police Department Detective, have an unusual relationship. They work together to solve crimes, especially those involving murder.

Priest alternates chapters, one with Leda then the next with Grady, each viewpoint in the third person point of view. Although Grady is frequently reluctant to involve Leda, he has had success with her psychic capabilities in the past and he will take any port in a storm. “His gut trusted her gut more than he’d ever tell her. Or it trusted her innate nosiness, whichever.”

The story opens with Grady and his daughter Molly searching Mount Rainier’s Paradise visitor center in search of their lost dog, Cairo. Cairo has been lost for several days and Molly is nothing short of hysterical. Grady is not sure they will find Cairo, when all of a sudden the pup appears, dirty and thrilled with his escapade. And the gift he brings with him is a human leg.

Although not in his jurisdiction, it is his dog that found the leg, and Grady is drawn into the investigation and the search for the rest of the body, now known as “Mr. Leg.”

In the meantime, Leda Foley’s psychic achievements have not gone unnoticed in her jurisdiction, and she is hired by Dan Matarese to find his sister, Robin Reddick. “[she] . . . vanished . . . with a bank pouch full of cash . . . but I promise she didn’t steal it.” As Leda gathers more information, she discovers that Robin was in a bad marriage to Professor Paul Reddick, a womanizing man whose affairs were many and frequent.

Here Priest begins her back and forth chapters favoring each of the protagonists, as DNA determines that Cairo’s human treat belonged to one Professor Paul Reddick. Reluctantly, and with each case unknown to the other, Grady approaches Leda for psychic help in finding the remainder of Paul Reddick.

Now firmly established that the two investigations—Robin’s disappearance and Paul’s dismembered leg—may be connected, and having established that Paul was murdered, Priest begins to create a solid group of possible candidates.

Dr. Reddick and Robin’s son Jeff, has no love lost for his father for the way he treated Robin with his many inexcusable affairs. Dan, Robin’s brother, is more of a father to Jeff than Paul was, and he, too, does not appreciate Paul’s disregard for Robin.

And then there is Helena, Paul’s assistant whose unrepentant feelings for a man who has no use for her, romantically, gives the woman motive. Enter Julie and Carson Coleman, siblings who have their own motives—Julie, it turns out is one of Paul’s many ex-lovers and she has been unceremoniously dumped; and Carson, who deeply resents the way his sister has been treated.

Although there is no strong climactic scene as the story winds down, Priest still does a good job of wrapping up all the loose ends, getting rid of any red herrings, and bringing her foreshadowing to a satisfying conclusion.

Priest’s fans will tap their fingers waiting for the next installment of the psychic and detective search for justice.