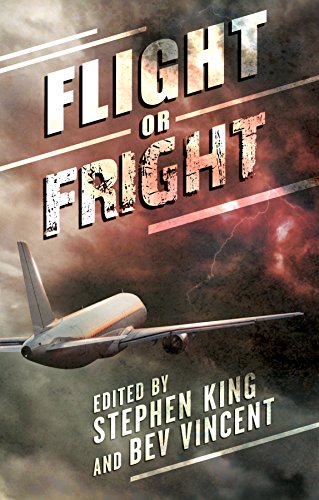 If you’ve ever flown, then you’ll know the fear that can sometimes come with the experience; the unexpected turbulence, unforeseen weather events, the vertigo, the constant possibility that something might go wrong and send the plane plummeting to the ground.

This “fear” is exactly what editors Stephen King and Bev Vincent explore in their anthology, Flight or Fright, and the authors push every conceivable notion of aeronautical terror to their limit. In his introduction to the anthology King himself admits to not being a fan of flying, and presents one of his own experiences to set up the tone for the fiction that follows.

Flight or Fright offers up an interesting mix of classic and new stories with the majority consisting of reprints and two new stories, one by King and the other by his son, Joe Hill.

As a whole, the anthology presents a wide array of scares, ramping up the latent fears air travel can present; the claustrophobia, the sounds the plane’s mechanics makes, the sheer powerlessness that passengers feel when something does go wrong. There are tales of paranoia (Richard Matheson’s “Nightmare at 20,000 Feet”), cosmic terror (Sir Arthur Conan Doyle’s “The Horror of the Heights”), time travel (E.C. Tubb’s “Lucifer!”), and even a locked room murder in an airplane lavatory (Peter Tremayne’s “Murder in the Air”).

There are several real standouts, including the opening story, E. Michael Lewis’ “Cargo.” The tale offers a nightmarish insight into the aftermath of the Jonestown Massacre from inside the cargo hold of a C-141 troop carrier. The blend of history with the supernatural makes it one of the most memorable stories.

Other memorable entries include “Diablitos” by Cody Goodfellow; the author mixes native Columbian mythology with airborne disease and spins a nasty little apocalyptic tale that will definitely leave a bad taste in the mouth. The one story that manages to not only be entertaining, but poignant, is Joe Hill’s “You Are Released.” This passenger-hopping tale about an airliner hurtling through the outbreak of World War III is pure nightmare fuel. It’s a vivid exploration of real people, flaws and all, as they contemplate catastrophe.

King’s story, “The Turbulence Expert” proposes that there are special people tasked to help planes survive the phenomenon of “clear air turbulence” using their fear alone. Like many of King’s short stories, it leaves you guessing—and wanting more.

The volume ends with a long poem by James Dickey, called “Falling.” Supposedly inspired by the real-life account of a stewardess falling out of a plane, Dickey paints a beautifully haunting picture of what would no doubt be a horrifying demise.

One observation that some readers may find curious is that there are no stories by female authors in the anthology. This certainly isn’t a deal-breaker, but it would have been interesting to have had some tales from a female perspective to add some additional diversity. Having said that, it’s possible that there may have been few stories of this nature written by women for the editors to select from?

According to Bev Vincent’s Afterword, the idea for Fright or Flight was apparently conceived by King on a whim, but it’s clear that each story has been carefully selected. The pair have scoured the globe and found some of the most intriguing tales of high-flying horror, mystery and adventure. Here’s hoping King and Vincent decide to compile a second volume with some fresh content. With such a terrifying theme, the sky’s the limit.

Greg Chapman’s most recent novel is The Noctuary: Pandemonium. His first novel, Hollow House, was nominated for a Bram Stoker Award® for Superior Achievement in a First Novel in 2016.