Flight 7 Is Missing: The Search For My Father's Killer 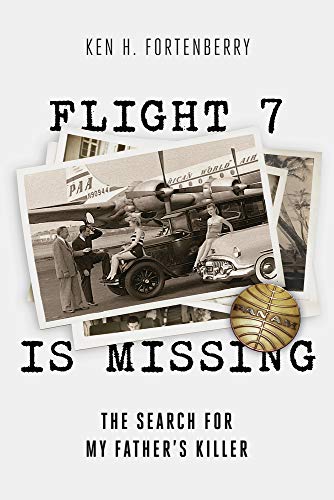 Everyone likes a good mystery, particularly when it involves an actual event. In this case, it’s one of the unsolved mysteries of U.S. aviation history. The fact that the author is the son of the co-pilot/navigator on the flight in question obviously makes it something personal. The fact that the aircraft disappeared over the Pacific Ocean on November 8, 1957, only helps to emphasize and enforce the mystery behind it.

Adding to the mystery are the different cause possibilities and suspects. With the remains of the aircraft at the bottom of the Pacific, thousands of feet down, it was impossible then, and largely remains so now, to recover them and any human remains in order to definitively determine a cause. Consequently, the author’s possible solution must necessarily be considered as speculative, although he has done his due diligence and research and provided a logical explanation.

Beyond the above, and with the recovery of very minimal aircraft debris and remains, there was also the lack of interest in the case on the part of the FBI (no, immediate evidence of a crime), an insufficient and incomplete investigation by the Civil Aeronautics Board and the effort to deflect any responsibility for the crash on the part of Pan American Airways, especially so after maintenance procedures had been determined to be not “according to the book.”

As this is an aviation mystery, and as with any mystery, the author’s format follows the standard procedure and goes down the line “investigating” each and every likely suspect, as would any detective, in order to determine motive and opportunity. Needless to say, each suspect’s recent life story is told, certainly enough to keep the reader guessing from plausibility.

There is someone from which to choose for everyone from the shady business dealer, the disgruntled employee, and the suicidal and mentally ill right down to the insurance payoff for purposes of fraud. Indeed, there is speculation that one possible suspect either never got on board (these were the days prior to airport security) or got on and off prior to takeoff in order to plant a bomb.

Finally, and not surprisingly, there is also speculation that perhaps the aircraft had a run-in with a UFO. Again, these were the days of heavy UFO activity as well as the beginning of the space race as the Soviets had just launched into orbit the first ever orbiting satellite.

With the lack of aforementioned interest from the FBI, there was also a relative lack of enthusiasm from the airline to investigate the cause due to liability issues in addition to the effort to preclude any close scrutiny of the maintenance records. As well, the aircraft type had also had a previous record of crashes and apparently wasn’t exactly the best engineered airplane in aviation history.

With no survivors and few recovered remains and pieces of the aircraft from the middle of the eastern Pacific Ocean, it was certainly a difficult case to crack even had there been a determined effort to thoroughly investigate the cause.

Of course, the author’s solution to the mystery will not be revealed here but, suffice to say, there is enough information provided in this story for the reader to make a personal conclusion whether in agreement with the author or not.

As this story is a personal one for the author, there are excerpts from letters from his father to the family interspersed through the text in order to give insight into not just family life but also his father’s mindset as he proceeded through his aviation career. They certainly emphasize the loss the author has felt and the lack of closure after 60 years.

There are no notes or even a bibliography, however, one might reasonably conclude that the author consulted the investigation’s official documents and reports and records, governmental and otherwise.

There are an addendum and an appendix, however. The former summarizes the later lives of his mother and others mentioned in the text, and the appendix lists the names of recovered victims, probable cause of death of those victims, and the names of those who were lost at sea and not recovered.

As a mystery, this is a story that will keep the reader guessing even if the result is not what one anticipates or with which one happens to agree. It is interesting and a good read especially since we’ll probably never know what happened to Flight 7.