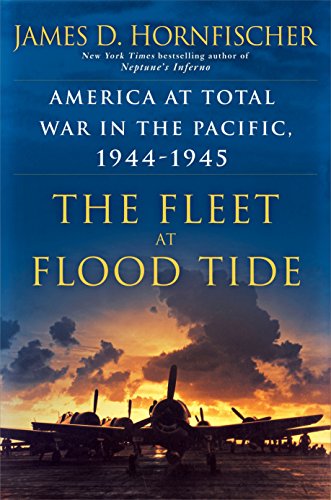 “The story of the mightiest navy in history is both compelling and personal . . .”

James Hornfischer has written several bestselling histories of the U.S. Navy in World War II, telling the stories of both the finest moments and hardest battles the Navy has ever faced. This new book is the worthy successor to his earlier study of the U.S. Navy during the Guadalcanal campaign, when the Navy hit its nadir of literally scraping together the last cruisers and destroyers in the Southwest Pacific to stop the final Japanese assault on the Marine held island.

This volume begins almost 18 months later, in early 1944, when the American Navy now approaches its zenith, with the industrial might and a massive induction and training program has not only replaced American losses, but created a bigger battle fleet than the remaining Japanese Imperial Navy.

To scope this massive topic down to readable single volume, Hornfischer uses the perspective of three key Americans as a skeleton to build a compelling read that combines a sweeping narrative history with personal histories from participants. Admiral Raymond Spruance, the intellectual fighting sailor who led the Pacific Fleet’s carrier forces during this critical campaign; Vice Admiral Richmond K. Turner, the imperfect but brilliant commander of his awesome amphibious force; and Colonel Paul Tibbets, the battle hardened bomber pilot that would lead the first atomic bomb attack on Japan.

These three men form the core his narrative, but Hornfischer does an excellent job of also providing the Japanese perspective on these crucial events, from the leadership of the Imperial Japanese Navy eager to restore their glory and turn back the strengthening American tide, to the soldiers, sailors, and civilians caught up the maelstrom of a desperate Empire trying to reverse a rapidly deteriorating strategic situation.

The operations to capture the Marianas Islands form the core of the story, and the narrative covers both the brutal land campaign, the first in the Pacific where American troops encountered large numbers of Japanese civilians, and the massive sea battle, the largest clash of carrier forces in naval history.

Hornfischer is at his best with his retelling of the battle known to most military historians as the “Great Marianas Turkey Shoot.” The strategic and tactical decisions of both fleet commanders are analyzed and dissected in the context of what they knew about their opponent, what they understood their mission to be, and what risks they were willing to take.

Although Admiral Spruance came under great criticism for his cautious insistence at guarding the landing force over pursuing the Japanese Fleet, history has ultimately proven the wisdom of his decision, which led to the destruction of Japanese naval air power and the sinking of three Japanese carriers while safeguarding the highly vulnerable amphibious and logistics ships supporting the land forces.

The analysis of the tactical and operational capabilities of the resurgent American naval air forces is particularly fascinating. The American Fifth Fleet of 1944 had the most technically sophisticated air defense and land strike capability of any fleet in the war, dwarfing the capabilities of their Japanese rivals. Combining the new technology of radar, vastly improved fighters like the Grumman F6F Hellcat, and a sophisticated command and control system to guide fighters directly at enemy air raids, this model of fleet air defense would be the genesis of the Navy’s basic fleet air defense doctrine for the next half century. Modern naval aviators can only read with awe how the fighter squadrons of the Fifth Fleet decimated their Japanese opponents in a daylong aerial battle.

The increasingly suicidal resistance of the Japanese military, combined with the mass suicides on Saipan of Japanese civilians inculcated with propaganda depicting American soldiers and Marines as murderous barbarians had a profound effect on American military leaders as the war moved closer to Japan. This is the basis of the final section of the book dealing with the use of atomic bombs to end the war, the Japanese surrender, and the beginning of the ensuing occupation of Japan.

Hornfischer does not overtly wade into the controversy over the use of the atomic bombs. But he does present the intelligence reports available to American commanders at the time that showed the Japanese had a very good idea where the American invasion landings would occur on both Kyushu and Honshu and were pouring troops and kamikazes opposite those landing beaches, increasing the chance not only for heavy American and Japanese casualties, but possible failure of the invasion itself. Given the war wariness of the American people, including the troops slated to participate in the invasion, the decision to use these highly destructive weapons is almost inevitable.

This is another marvelous addition to Hornfischer’s portfolio of naval histories. The story of the mightiest navy in history is both compelling and personal as he portrays a navy rising from near disaster to decisively defeat their opponent in open battle and pave the way for the eventual unconditional surrender of Japan.