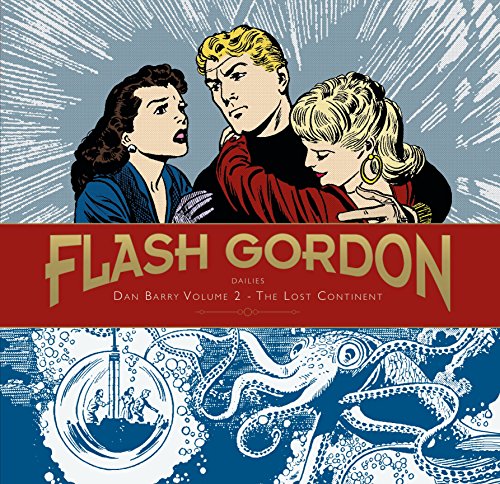 Like Batman, Spider-Man, Sherlock Holmes, and Wonder Woman, Flash Gordon has lived through several reincarnations. But his essence is always the same. He is a damn handsome space traveler who has put his own needs to the side as he saves the universe time and time again. That’s why we love him.

The work collected in Flash Gordon Dailies: Dan Barry Volume Two—The Lost Continent—1953–1956 brings to light a three-year run that captures the character during a fascinating era in his history. These strips are a forgotten part of Flash Gordon’s long, long legacy that is now open for rediscovery and revaluation. Historically this collection is one of the earliest attempts to do what some call today “rebranding” a character. For fans of comic books, it also holds an interesting connection to the world of DC Comics and their own similarly named speedster, The Flash.

First introduced in American newspapers on January 7, 1934, as an answer to the success of Buck Rogers, you can thank this star-crossed polo player for such wonderful things such as the popularity of spaceships, ray guns, and the beauty of the animated series Futurama.

This volume, like the first in this series which reprints Flash Gordon’s daily newspaper strips from the early fifties, features multiple writers and artists working on the strip. While King Feature Syndicate motivation may have come from the success of the film Destination Moon, in 1950 reinventing an established character was practically unheard of. Today we have at least nine Batman’s running around. Sixty years ago an audience had no experience with the concept of franchise rebirth.

The previous incarnation of Flash Gordon had begun in 1934 with the art of Alex Raymond on the Sunday pages. This tradition continued through the forties and into the fifties with beautiful work by artist Mac Raboy. Many who enjoyed the strip during these days were drawn in by not only the outrageous stories of other worlds populated by half-hawk half-humans, but by the beauty of the art created by Raymond and then Raboy. These Sunday pages are often considered to be some of greatest art ever seen in a newspaper. This is the period of Flash Gordon as the polo-playing spaceman that most of us are familiar with.

While Raboy’s stunning pencils and art were still featured in the Sunday pages, in 1950 King Features Syndicate saw that science fiction as starting to become popular in film and in print. In response they decided to relaunch the daily version.

Suddenly Flash Gordon was, as Norwood says in his introduction, “. . . a hot-shot spaceship pilot whose rocketship and spacesuit were clearly based on the rocket ships and spacesuits in [the film] Destination Moon.”

Historian Rick Norwood’s account of this evolution is just part of his relaxed and informative introduction. He also makes the salient point that while the strips contain as much adventure and killer art as Flash Gordon ever did before, this is also an important time for science fiction in American literary history. This is an important stop as science fiction is being slowly absorbed into the mainstream.

The genre is about to enter another golden age that in a few years will introduce and sharpen sci-fi in the eye of the general public. Next it will be shows such as The Twilight Zone and then Star Trek that help set the stage for the deafening explosion of Star Wars in the Seventies.

While the continuity inside the strips collected here may deviate from what some had expected, longtime Flash Gordon veteran artist and writer Dan Barry did oversee the story arcs from this period. As he and the other writers work towards building the mythos of this version they do contradict previous storylines or ideas. As Norwood acknowledges in his introduction, the start for this new incarnation Flash Gordon was indeed rocky.

For those who demand strict continuity and reality in their fictional works, this may create a little havoc. Regardless, there is a never-ending sense of fun and adventure inside these story arcs that transcends the need for strict scientific accuracy.

Several of the stories in this collection are attributed to a veteran of DC Comics, Robert Kanigher. Over the years he had written stories for The Justice Society of America, Green Lantern, and the very first Black Canary story, which had appeared inside a Johnny Thunder story. Today he is also acknowledged as the creator of Sgt. Rock.

Shortly after he worked on the Flash Gordon daily strip, Kanigher went on to write what may be the greatest example of a successful revision/rebirth/reinvention in the history of modern entertainment, the Silver Age Flash, Barry Allen.

This isn’t a connection to be exaggerated, but it is significant. You can bet your bottom dollar that the editors at DC knew about the 1950 reinvention of Flash Gordon. Those same editors also knew that Marvel had failed when they attempted to bring back their Golden Age heroes in 1954. When it came to write the first story that featured Barry Allen, DC’s legendary editor Julie Schwartz called on Kanigher to do it. He was a comic writer who understood reinvention and the risks. He had also penned the last Golden Age solo story of The Flash as well.

Flash Gordon is an integral part in the world of science fiction. The universe that has grown around the Star Wars films is one of the most brilliant and inclusive worlds ever seen in the genre. If you are looking for the stories or art that directly influenced George Lucas’ creation of that infinite cosmos, look no further than the classic newspaper strips featuring Flash Gordon.