Flash: A Celebration of 75 Years 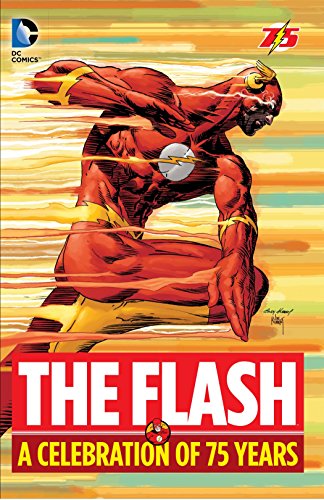 “an essential entry into DC’s ongoing Celebration series of anthologies.”

Created in the wake of Superman and then Batman’s incredible success, the Flash has one power and one power only: he can run. That’s it. Nothing else.

It is a power that any kid could relate to and that ease of identification, that ability to make a reader believe that they were only one step removed from being someone super led to the Flash becoming one of the most popular and successful superheroes of the Golden Age of comic books.

Flash: A Celebration of 75 Years is the visual equivalent of a double CD set of the greatest possible hits by your favorite group. This massive collection features the most important stories that have ever featured the Scarlet Speedster. It is a joyous celebration of speed, heroism, and the power of graphic storytelling.

You would be hard-pressed to find a better introduction to the Flash. Especially for someone who is just discovering the long history of Flash through the hit CW TV series. The stories were chosen with such care and attention to detail that it is also the perfect anthology for someone who knows the mythology of the Flash inside out.

Every part of the speedster’s famed universe is included. Each origin story is given its due. There is the famous race to the finish in order to find out who is faster, Superman or the Flash. There are other speedsters including the Flash’s own twin children. Each of whom has inherited a superpower!

Several of the stories feature members of the Flash’s Rogues Gallery of villains. Each one of them more crazed and dangerous than the next. Gorilla Grodd, The Trickster, the Mirror Master, and most importantly the Reverse Flash are all given their due.

The idea behind the Flash is so simple and clear that it has also became a template for reinvention across generations of readers. The rebirth of the Flash in the fifties, complete with a new secret identity and new location is almost solely responsible for saving the entire genre of superheroes.

Publishers were, as many know, scrambling to find the next hit. Created in the offices of All-American Comics in 1939, the character first appeared in Flash Comics #1 (January 1940). That origin story and first appearance is naturally included in this anthology. It is a perfect period piece.

Jay Garrick is a hard-working college student who wishes that he could do well on the football field in order to impress a certain girl. This is a relatively new storytelling scenario, one that rises out of the American mindset and moves into the mass populous. It is the idea that you can move past your origins by becoming a sports hero. Harold Lloyd famously used it in one of his most famous silent films. The readers who picked up the Flash magazine understood the idea immediately.

One night Garrick is working late in the lab when he accidently knocks over a beaker of “hard water” (such is the science of 1939 . . .), passes out, and wakes up with the amazing ability to run.

There is a certain amount of logic demanded by fans that, by the standards of today’s fans, is non-present in the origin. But for the time, it is a perfect origin that easily melds reality and science fiction.

From this simple lab accident an entire world springs forth. This is where the idea of the Flash becomes incredible, an idea that helps build the DC Universe and lasts 75 years.

Unlike Superman, Batman and Wonder Woman who have traveled the last 75+ years with their names and histories essentially intact, this new version is a brand new person. In 1956 the Flash was reinvented as Barry Allen, a police scientist. He is the perfect hero for a country obsessed with the space program and advancement.

With the introduction of Allen as the new Flash the stage is now set for the next 50+ years. The character becomes free to assume new incarnations. As the years pass new versions of the Flash appear. Designed and created with a new generation and a new world in mind, they are always rooted in the pre-existing mythology. No matter their secret identity, they are still the Flash.

Women have always played an important and equal part in the Flash universe. As various versions of the Flash develop over time, they always feature a partner. Still, those roles have reflected the tenor of the times.

Jay’s girlfriend Joan may initially appear to be a shallow girl who cares more for the football hero in him, but she quickly grows to become a major part of almost all of his adventures. In time the two develop one of the strongest marriages in comic history.

The second, Silver Age Flash, features the incredible Iris West. She holds a job on her own, has her own place, and answers to no one but her editor. In The Flash the hero is sharing his life with someone else. While there are the obvious “damsel in distress” scenarios, the women are consistently strong throughout the various incarnations.

There are numerous highlights in this anthology including the famous story Flash of Two Worlds (The Flash #123, September 1961). This set up the first meeting between two different time periods in comic history as the heroes of the then-forgotten Golden Age become a vital part of the current comic world.

Work by such comic writing legends such as Gardner Fox, John Broome, Marv Wolman, and Geoff Johns shows why The Flash has lasted so long. Artists such as Carmine Infantino, George Perez, Mike Wieringo, and Francis Manapul bring it all to life.

This is an essential entry into DC’s ongoing Celebration series of anthologies.