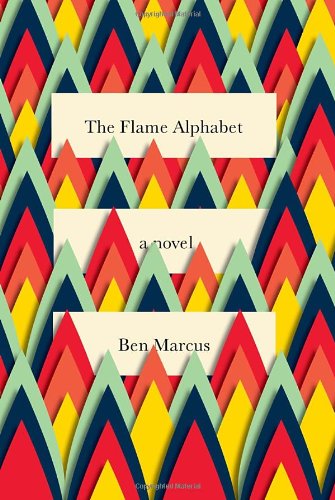 “Ben Marcus was already known as a daring, experimental writer’s writer on the strength of his three previous books of fiction. The good news for the general reading public is that his fourth book, The Flame Alphabet, is his most accessible to date, and its comparative clarity and linearity in no way diminishes its power, inventiveness, and originality. The quality of the writing also compensates for the book’s thin character development. Instead, Mr. Marcus deploys his potent prose to tell a tale about a world in which all language becomes lethal.”

“In the months before our departure, most of what sickened us came from our sweet daughter’s mouth. Some of it she said, and some of it she whispered, and some of it she shouted. She scribbled and wrote it and then read it aloud. She found it in books and in the mail and she made it up in her head. It was soaked into the cursive script she perfected in school, letters ballooning with heart-dotted i’s. Vowels defaced into animal drawings. Each piece of the alphabet that she wrote looked like a fat molecule engorged with air, ready to burst. How so very dear.

“The sickness washed over us when we saw it, when we heard it, when we thought of it later. We feasted on the putrid material because our daughter made it. We gorged on it and inside us it steamed, rotted, turned rank.”

Sentences and paragraphs such as these instill envy in the hearts of writers and amaze readers who wonder how long their author will be able to sustain such brilliant composition. Yet paragraph after paragraph, page after page, chapter after chapter the language of this book will continue to enthrall readers even as they become engrossed in its story and after its end start reading it all over again.

Ben Marcus was already known as a daring, experimental writer’s writer on the strength of his three previous books of fiction. The good news for the general reading public is that his fourth book, The Flame Alphabet, is his most accessible to date, and its comparative clarity and linearity in no way diminishes its power, inventiveness, and originality. The quality of the writing also compensates for the book’s thin character development. Instead, Mr. Marcus deploys his potent prose to tell a tale about a world in which all language becomes lethal.

A language epidemic erupts that only afflicts adults. It begins in Jewish families but soon spreads to the population at large. Hearing spoken or reading written language and comprehending either becomes toxic; only children are immune and only until they turn 18.

We experience the epidemic through the eyes of Samuel, Claire, and their irritable, loquacious teenage daughter Esther who are middle class, suburban, Jewish New Yorkers. Mr. Marcus does not provide dates, but since the Internet and cell phones are not mentioned readers may infer that the story takes place in the 1980s (Samuel and Claire’s marriage shows no evidence of the traditional gender roles characteristic of earlier decades). There is also a certain irony in setting a tale in which the use and comprehension of language is deadly at the dawn of the information age, whether or not that is Mr. Marcus’ intention.

Like every work of fantasy the premise of this book requires a suspension of disbelief. A less imaginative writer might have rendered every other element in the narrative true to life, but Mr. Marcus also invents a new form of Judaism. Instead of attending services at their town’s synagogue on Friday nights or Saturday mornings, every Thursday Samuel and Claire go to a hut in a nearby forest, their synagogue hut, where they attach a sponge-like loudspeaker to a cable in a hole in the ground and listen to secret sermons by a Reconstructionist rabbi named Burke. Such, readers may suppose, are the lengths fantasy fiction characters had to go to before the age of the World Wide Web, but the network of synagogue huts and their connecting cables become an important plot element later in the book.

Esther does not accompany Samuel and Claire to the synagogue hut, nor are they allowed to go singly; this form of worship is supposed to only be done in pairs. A ritual centered on secret information arouses, as expected, suspicion among bigoted and paranoid segments of the general populace who refer to practitioners as Forest Jews. Samuel, the book’s narrator, does not mention the reactions of more conventional Jews. Rabbinic literature has much to say about harmful speech (literally The Evil Tongue), but Mr. Marcus does not explore this.

The book’s 57 chapters are divided into three sections. The first section describes the onset of the illness in the family in the months preceding Samuel, Claire, and all other adults’ forced evacuation when Esther and the other children will be left behind in quarantine. Samuel is surprised that utilities like electricity and water still work, but Mr. Marcus does not explore the macro-economic consequences of the epidemic, choosing instead to focus on one family.

“. . . our joints were hardening and our muscles were tight, and when I bent over I could no longer easily beathe. At night we filled ourselves with water and slept more deliberately, with silencing and darkening gear, when we weren’t waking up to dry heave. But we were every day stiffening, growing sicker, paler, more exhausted with what Esther could not stop doing. A decline in our appearance came next. . . .

Perhaps because she is a better listener, Claire becomes sicker than Samuel.

“On our carpet Claire looked like one of those terminal patients let out of the hospital for a final field trip to her favorite restaurant or a ball game. A pity outing. She was thin and pale and when she smiled something dark shone from her mouth.”

On evacuation day a deathly ill Claire bolts from the car, and Samuel has to leave without her. The book’s second section describes Samuel’s nearly three year stay first as a patient and then as a scientist working in silence at a totalitarian research hospital in Rochester run by an arrogant, callous, evil genius named LeBov who directs ethically questionable experiments.

The third section describes Samuel’s escape from the hospital and the implementation of his plan to reunite his family. To discuss these sections in greater detail would spoil a suspenseful and engaging read. Suffice to say that reuniting his family remains Samuel’s ultimate objective throughout.

“When my family is together again I will not need to speak, to read, to write. What is there, anyway, to say? The three of us require no speech. We are fine in our silence. This is the world we prefer.”

Fans of dystopian fiction will not want to miss The Flame Alphabet, and the strength of Mr. Marcus’ writing will attract readers who would not usually be drawn to the genre. As Duke Ellington might have put it, The Flame Alphabet is “beyond category,” recommended to anyone who appreciates fine, albeit sad, writing and a well told story.