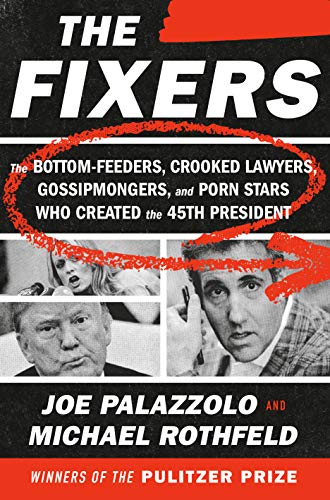 “Did you suspect that Donald J. Trump has long been a crook and surrounded by crooks? This book will confirm your deepest anxieties and do so with crushing evidence presented in a most engaging style.”

Did you suspect that Donald J. Trump has long been a crook and surrounded by crooks? This book will confirm your deepest anxieties and do so with crushing evidence presented in a most engaging style. The authors are journalists who led a team at the Wall Street Journal that  won the 2019 Pulitzer for National Reporting.

Trump’s first well known fixer attorney was Roy Cohn, notorious for trying to fix things for another crooked politician, Senator Joe McCarthy in 1954. In the 1970s Cohn tried to defend Trump against charges that he had discriminated against blacks in real estate matters. Many years later, and just three weeks before Trump’s inauguration in 2017, Trump told friends he had to fumigate dishes at Mar-a-Lago after Roy Cohn visited there in 1986 while dying of AIDS. Still, Palazzolo and Rothfeld write, Cohn remained “the standard fixer by which Trump judged all others.”

Another lawyer fixer was Michael Cohen, now serving a three-year jail term, who paid off Stormy Daniels to keep quiet about her fling with Trump. Cohen went to jail, but Trump stayed in the White House. (A notable bottom-feeder in her own right, Stormy demanded that one of her husbands also do pornography so that if they had a child and later experienced a custody dispute, he could not hold her past against her. As you read this, the Manhattan District Attorney's office is investigating whether the president and the Trump Organization violated state laws in connection with hush money payments made to Stormy and other women alleging affairs with Trump. The investigation is looking into whether business records filed with the state were falsified and if any tax laws were violated.)

Among the attorneys Trump engaged to extricate him from his usually self-induced troubles were William Barr, Rudy Giuliani, Ken Starr, and Alan Dershowitz.  Barr got the post of Attorney General  previously held by Jeff Sessions after Barr sent a 19-page letter to the Justice Department arguing that the president could not and should not be investigated for obstruction of justice. Barr contended that all his actions aimed to preserve the presidency—not this president. When he became AG, however, Barr’s four-page summary of the Mueller Report distorted its findings and permitted the president falsely to claim “exoneration.”

The president’s genius in selecting disreputables to assist him continued in 2020. To defend himself against impeachment the president brought in two more notorious attorneys, Ken Starr and Alan Dershowitz—Starr who was fired from his job as president of Baylor University for lax protection of female students from sexual assault and Dershowitz, the  Harvard professor emeritus known as a defender of O. J. Simpson, Jeffrey Epstein, Mike Tyson, and other unsavory characters.

Another unsavory, though not a lawyer, is David Pecker, chief of the company that publishes the National Enquirer,  about whom there are nearly 50 entries in The Fixer index. He and Trump knew each other for years. They were never friends but exchanged favors. Pecker bought and killed stories about Trump as well as about Arnold Schwarzenegger.

Palazzolo and Rothfeld conclude that many of those who served Trump in the business world or in politics were attracted  to  his bottomless ego and were willing to cater to his whims. He made his orders known directly or in code to the fixers who carried them out, without leaving his fingerprints. If those who surrounded Trump in the White House had followed his every wish, however, the case that he had obstructed justice would certainly have been stronger. .

The Fixers provides details about many facets of Donald Trump that have been bruited for years. Somehow most of the Republicans in Congress and roughly two out of five U.S. voters ignore or deny facts that would disqualify any other candidate for high office. While Republican politicians and their corporate backers have something tangible to gain from blackening their own reputations, most of Trump’s base do not. Indeed, most of them have suffered or will suffer from his policies. As Nobel laureate Joseph E. Stiglitz points out (Project Syndicate, January 17, 2020), most of ostensible growth in the U.S. economy under Trump benefited only the upper 1 or 0.1 percent classes while incomes of most Americans stagnated and many were dying deaths of despair. Even the claims about the success of the Trump economy are untrue.