In Five Years: A Novel 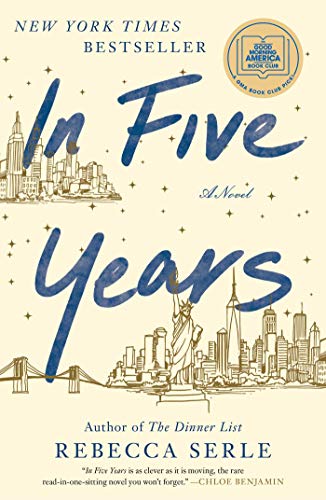 Everyone is familiar with the question "Where do you want to be in five years?"

This is a mantra Danielle ("Dannie") Kohan goes by, and when she applies for a longed-for job with a prestigious Manhattan corporate law firm, she offers the right answer to that question.

The year is 2020, and Dannie, engaged and living with her fiancée, David Rosen, considers she's right where she wants to be. In five years, she believes she'll be married to David, owning the home of her dreams, becoming a senior partner at the firm, and maybe even starting a family.

So imagine her shock when on the night she gets engaged, she falls asleep and dreams something too real to be a dream. In this illusion, it is five years later—2025—and she awakens in an unfamiliar bed in an unfamiliar loft apartment, with an unfamiliar man. Dannie wonders, What did I do? Did I drink too much? How did I end up here?

Dannie senses this is not a dream, but a reality and the gorgeous guy she wakes up next to, Aaron, is as real as she is. Though this is a dream, it sticks in her head, and the thoughts assail her as to if she is meant to marry David after all.

Working at her coveted position means she puts in ungodly hours. David is also is consumed with work, and because both are constantly busy, the time never seems to right to set a wedding date.

Four-and-a-half years pass since the night of Dannie's engagement and her enigmatic dream. Now it is 2025, and she meets her best friend Bella at their favorite restaurant.

She and Bella, besties forever, are opposites, yet their relationship is solid. Where Dannie is hardworking and conservative, Bella is eclectic, bohemian, and a free spirit, so Dannie is surprised to see Bella beaming and unusually cheerful. Bella is in love!

"'I have something to tell you,' she says. She reaches across the table and takes my hand.

"Instantly, I'm flooded with a familiar sensation of pulling, like there's a tiny string inside of me that only she can find and thread. She's going to tell me she met someone. She's falling in love. I know the drill so well I wish we could go through all the steps right here at this table, with our coffee. Intrigue. Obsession. Distaste. Desperation. Apathy."

Bella claimed to be in love many times before, and her romances never worked out, so Dannie is skeptical, yet she's never seen Bella so animated over a man.

When Bella suggests she and Greg, her new guy, meet Dannie and David for dinner, envision Dannie's shock when Bella shows up with the man from her long-ago dream! Shocked and unable to comprehend this, Dannie suddenly states she is ill so she can leave and get her head together.

". . . just as the restaurant door opens and out onto the pavement walks Greg.  Except he's not Greg. He's Aaron.

"Aaron, whose face and name have been running in my head on a loop, for the last four and a half years. The center of so many questions and daydreams and forced replays made manifest on the sidewalk now.

"It wasn't a dream. Of course, it wasn't. He's standing here now, and there is no one else he could be. Nat a man I've spotted at the movies, not an associate I once traded work jabs with. Not someone I shared a plane ride seated next to. He is only the man from the apartment.

"I reel back. I do not know whether to scream or run. Instead, I'm cemented. My feet have merged with the pavement. The answer: my best friend's boyfriend."

Thinking this was all behind her, to the point of seeing a therapist for guidance, she is flummoxed to realize this guy is real! What does she do now, especially when Bella swears, he's the one?

Dannie considers she and David must marry right away, though she's put him off for years. And the wedding needs to take place before December 15th, the date she was shown in that amazing dream. This way she'll be settled, she won't lose her best friend, and this guy will be out of her head once and for all.

As Dannie and David plan their nuptials with little time to do so, life shows different plans, and other things come to play. Bella wants Dannie to check out the apartment she and Greg (Dannie's Aaron) hope to buy. It happens to be the loft from Dannie's dream, but now it is only a large space that needs renovation.

When Bella announces she is pregnant, Dannie does not react at first. Of course, she is happy for her, but also thoroughly confused. What does everything mean? Unfortunately, Bella's pregnancy is a false positive, and she learns she is very ill. Dannie pulls out all the stops to help her, though at times she senses she is a third wheel and doesn't like sharing her with Greg/Aaron.

Set in New York City, the book aptly depicts many locations with diverse and descriptive facts so the reader becomes a part of the overcrowded metropolis with the many venues offered and the ever-changing seasons.

In Five Years is a profound tale of unconditional love and anguish with a touch of the mystical and mysterious. Deep, abiding friendship and loyalty are portrayed along with heartbreak.