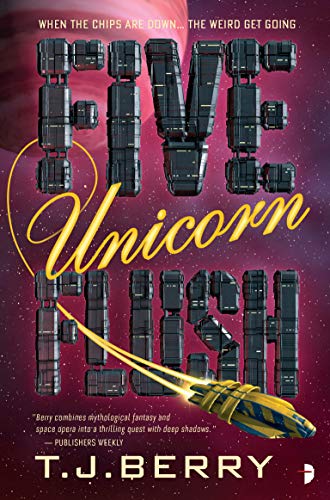 “Five Unicorn Flush is a perfect blend of space opera and high fantasy and includes an incredibly diverse cast of mythological features, from centaurs and unicorns to dryads and dwarves.”

In the sequel to Space Unicorn Blues, humans in Reasonspace are left flailing after the sudden departure of the Bala—a group of magical aliens that closely resemble Earth fairy tale creatures. For the last hundred years humanity enslaved the Bala and relied on their magic over technology, but now, no longer.

Without unicorn horn to power the faster-than-light spaceships, humanity’s expansion among the stars is limited. Planets are cut off from each other and millions of people are stranded in space. Supply lines are dead. Humanity is starving.

The Bala aren’t exacly having a picnic, either. The refuge planet they are whisked away to has no technology and possibly some weird mind parasites. For the tech-friendly Bala, the transition is difficult despite having finally shucked their human slave masters. A civil war threatens and Bala keep going missing in the acid forests of the new planet.

Anti-hero Captain Jenny Perata, human, former Bala slaver turned wife of a dryad, is determined to find the new Bala planet no matter the cost. She’s lost her wife, after all, and has a lot of sins against the Bala to atone for. Jenny can’t get anywhere without unicorn horn, unfortunately, and her quest to find even a small piece leaders her into skirmishes with pirate cannibals, necromancers, feisty AIs, and yes, eventually, space unicorns.

Five Unicorn Flush is a perfect blend of space opera and high fantasy and includes an incredibly diverse cast of mythological features, from centaurs and unicorns to dryads and dwarves. The creatures are rendered in high detail, from noting the beards on all dwarf genders:

to the ethereal description of actual angels, who can speak to the Bala gods. The beings aren’t actual Earth magical creatures, and are explained in the following way:

“The Reason panicked when they encountered the Bala for the first time, allowing front-line soldiers to name the creatures they saw. Most of the group were from a country called the United States of America, with just a handful from India. The Reason ended up with a slew of European fairytale names tacked onto creatures that predated Earth;s Stone Age.”

Captain Jenny Perata’s scenes are by far the most sensory in the book, and her interactions with various ship AIs are priceless.

‘”I can’t drag myself up fifteen floors,” said Jenny, annoyance creeping into her voice. “Is there an elevator?”

“None that are working,” said Actually.

“Your ship is shit,” croaked Jenny.

“It’s awesome that you’d waste what little air you have on insulting me,” said Actually. “Shows you really care, man. I like that about you.”’

Although there are numerous POV characters throughout the book, the narratives are woven tightly together and complement each other perfectly. The social dynamics on the new Bala homeworld hold just as much tension as Jenny’s attempt to secure unicorn horn, and Kevin the Necromancer’s journey to sabotage the Reason ship barreling toward the Bala homeworld is surprisingly sweet.

Holding all the classic trappings of traditional space opera with a few unicorns and angels thrown in for fun, Five Unicorn Flush is a unique yet comfortable space adventure filled with morally gray characters you can’t help but root for.