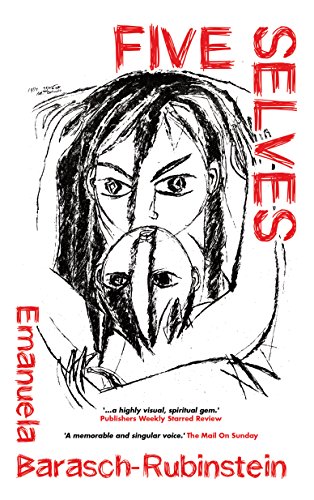 How emotionally stable are we really? How little would it take to upset our emotional equilibrium? How fine a line separates mental health from illness? And what is normal anyway? These are some of the questions readers may find themselves considering while reading the psychological portraits that comprise the five stories in Five Selves, the fiction debut written in Hebrew and translated into English by Israeli writer Emanuela Barasch-Rubinstein (The Devil, the Saints, and the Church: Reading Hochhuth’s The Deputy and Mephisto in the Third Reich).

The concept of normality is particularly germane in Israel whose founding ideology seeks to remedy the abnormal state of Jews living as a marginalized minority in the diaspora by creating a majority Jewish state. The modern Hebrew idiom Israelis use to refer to unexpected or unconventional conduct literally means “this/that (or he or she) is not normal.”

The book’s second story, “Earrings,” addresses both the narrator’s sense of identity and that of native born Israelis in general. It spans her adolescence and young adulthood during which she identifies and spends more and more of her free time with her elegant Viennese immigrant grandmother who lives in North Tel Aviv than with her informal Sabra mother and father in South Tel Aviv.

But her grandmother points out that like most Sabras our narrator’s individuality is underdeveloped and her relationships are ones of dependency. Her grandmother quotes her deceased English husband and the narrator’s grandfather who “said that native Israelis remind him of puppies detached from their mother, they have to try and guess how she would have raised them; but the absence of the mother makes them try to find support in each other, though this intimacy is not helpful at all.” This may sound like a gross generalization, but to readers who have lived in Israel and are acquainted with native Israelis it has the ring of truth.

In the first story, “A Bird Flight,” a Haifa professor tries to escape her grief following the death of her father the way the biblical Jonah tried to escape his prophetic calling by traveling west, in her case to an academic conference in Chicago.

Despite her intentions and the different location, the mourning process continues as she goes through the conference in a fog of grief reading her paper in a flat monotone, unable to focus on the other speakers’ talks or respond to or connect with her host who has also recently lost his mother.

Between talks by colleagues, meals with the host, and views of the skyline from Lakeshore Drive our nameless narrator recalls hospital visits during her father’s final illness, but the somber events notwithstanding, her first person narration has an intimate and engaging conversational tone as if a close friend were relating her state of mind during recent events.

The third story, “The Grammar Teacher,” is reminiscent of Tsipi Keller’s trilogy of psychological novels (Jackpot, Retelling, and Elsa) in which seemingly well-adjusted female protagonists emotionally unravel. The story’s title character is an emotionally brittle woman possibly with Aspergers who as a girl was a goody-two-shoes who always completed her assignments and earned good grades.

Becoming a teacher is an adult outlet for her conscientiousness, Hebrew grammar’s logic and regular rules with few irregular exceptions are a natural fit for her rigid mind, and though her classroom management is shaky and she doesn’t relate to her pupils on a human level, they nonetheless score well on standardized tests eventually earning the highest scores in the country.

When the principal hires a second charismatic grammar teacher with excellent command of classroom conduct and orders our narrator to observe and emulate the newcomer whom she assumes is her intended replacement, she abandons her pupils and goes on a shoplifting spree. But her undoing seems too abrupt both in terms of the development of her character and the plot and because she has several years seniority at the school, and even if she did not have tenure her union probably would not let her principal fire her without a fight.

And even if her union lost the fight, a more confident and resilient teacher whose students scored the highest grades in the country would likely find a position at another school, or failing that earn enough as a test prep tutor to supplement her computer scientist husband’s salary. But the story doesn’t mention tenure, a union, or the possibility of alternative employment, and when following the rules ceases to reward her our narrator breaks the law and takes what she wants.

Both of the final two stories have male protagonists, David and Gil, unlike their nameless female counterparts in the first three stories. In “Watch Dog,” the book’s only story narrated in the third person, David is a boy suffering from cynophobia, an irrational fear of dogs, who with the help of a therapist gradually overcomes his phobia. “Watch Dog” and “Earrings” are both appropriate for young adult readers.

The final story, “Aura,” is a tour de force narrated by Gil, a hospitalized traffic accident patient afflicted with amnesia and sensory integration disorder who conveys both his experience of his physical environment as painful sensation and his bewilderment at the visiting family members he doesn’t recognize. Gil repeatedly compares his hospital room and its lighting to a cave, an image he finds comforting and safe yet from which he fears he may never escape, and an image which may call to readers’ minds Plato’s allegory of the cave.

Unlike the first four stories, “Aura” is formally presented with paragraphs that begin at the left margin without indentation and are separated from one another by two line spaces and whose prose sometimes approaches the concision and imagery of poetry. Barasch-Rubinstein is a protege of Aharon Appelfeld, and her prose, like his, is direct and unpretentious.