The First Wave: The D-Day Warriors Who Led the Way to Victory in World War II 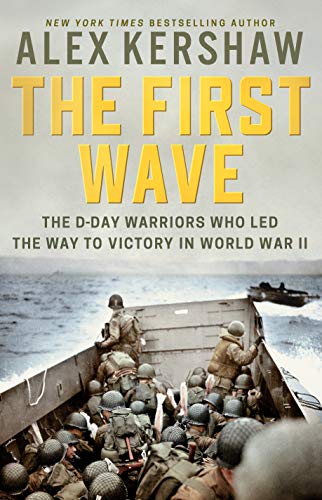 “Kershaw does a marvelous job of making these stories seem fresh and real to a new generation of readers.”

This year marks the 75th anniversary of D-Day, and there will likely be an avalanche of books revisiting this crucial day of the 20th century.  Alex Kershaw, author of multiple books on World War II, takes a unique view of the Allied invasion, telling the stories of the first men to parachute or land on the invasion beaches.

These soldiers had some of the most difficult assignments of the invasion force, with several forces conducting what today would be termed Special Operations.  Three of the most familiar tales to anyone who has read some of the more popular histories by Cornelius Ryan or Stephen Ambrose are still spell-binding and Kershaw has brought them to a new generation of readers: the American Ranger assault on Pont du Hoc, the British capture of the Pegasus bridge by glider-borne troops, and the airborne assault by British paratroopers on the Merville battery.

Kershaw does a marvelous job of making these stories seem fresh and real to a new generation of readers. One of the most remarkable and forgotten tales of the daring missions is the pilot who landed the first glider full of British troops under the command of Major John Howard.  Staff Sergeant Jim Wallwork, a member of the British Glider Pilot Regiment, achieved one of the war’s most incredible feats of airmanship, using only a stop watch, map, and compass to land the first glider only a few dozen yards from the bridge, allowing Howard and his small band to achieve compete surprise and capture the bridge in less than an hour.

Other stories may not be as familiar to general readers. The tale of the airborne pathfinders, specially trained troops who would precede the Allied air armada bringing in the three airborne divisions, is a remarkable tale, especially the story of Captain Frank Lillyman, one of these pathfinders that were the first Americans to invade Normandy.

When the first waves of Allied troops came ashore at the five invasion beaches, they had widely different experiences. At Utah Beach, the western-most, American troops came ashore without heavy resistance due to a fortuitous navigation error that brought them ashore south of their intended beaches. The exceptional battlefield decision of Brigadier General Theodore Roosevelt, Jr to continue bringing in troops over this beach prevented those troops from a more heavily fortified sector that could have inflicted significant casualties. The British and Canadian landings at the three Gold, Juno, and Sword invasion beaches also progressed more or less according to plan.

But Omaha Beach was the crisis point for the entire day. In a remarkable intelligence failure, the Allies were unaware that the less capable German 716th Division had been replaced by troops from the more experienced 352nd Division.  Moreover, Omaha Beach had some of the best prepared defenses of the entire Normandy coastline, with massive fortified bunkers filled with artillery, mortars, and machine guns that could sweep the landing areas with a murderous crossfire.

As a result, most of the first wave of American troops was nearly annihilated, including the famous Bedford boys, a group of American troops from Bedford, Virginia that suffered nearly 90% casualties of the men who enlisted from the town.

The entire Allied plan fell apart in that first wave, and only the courage of small groups of soldiers, highlighted by Kershaw, saved what could have been a disaster for the entire invasion plan.

For these men of the first wave, D-Day was truly the longest day. Even after they secured their initial objectives, they still faced an afternoon of German counterattacks that nearly recaptured the heights of Pont Du Hoc, stopped the American drive a few bitter miles off Omaha Beach, and almost overran the British troops holding Pegasus Bridge. For many of these men, D-Day was just the first day of months of fighting before they were either injured or killed—very few of these men emerged on VE Day without becoming casualties.

Even after the war, many of these men remained casualties, haunted by what they saw and did that day, many of them wracked with survivor’s guilt and what today would be termed PTSD. Not only did these men achieve heroic feats that day, they endured sacrifices almost unimaginable to today’s generation.  Kershaw’s book revives the story of these men and their bravery in battle that should never be forgotten.