First SEALs: The Untold Story of the Forging of America's Most Elite Unit 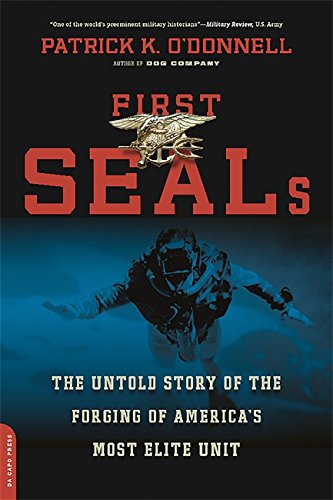 Modern day society is familiar with the existence, accomplishments, and exploits of America’s Special Operations forces, in particular the warriors known as U.S. Navy SEALs. The acronym is a consolidation of Sea, Air, and Land, the three mediums in which they operate. These commando type forces all have predecessors and antecedents, largely originating during World War II although “rangering” dates from Robert Rogers’ Rangers and his unconventional warfare tactics in the French and Indian War.

Army Rangers, among other missions, scaled the cliffs at Pointe du Hoc on D-Day. The Navy had Underwater Demolition Teams (UDT), also known sometimes as frogmen, largely in the Pacific theater. In this particular case, the point of origin was not an established service of the United States military but actually the predecessor of the Central Intelligence Agency, the Office of Strategic Services (OSS).

This organization, led by William J. Donovan, a World War I veteran and Medal of Honor awardee, was tasked with developing the coordination and authorized distribution of all actionable intelligence once the United States entered World War II.

In order to obtain said information, stealth was an absolute requirement as teams would be infiltrated behind enemy lines, frequently by submarine. As a result, it was paramount to initially develop underwater combat swimmers.

Consequently, it became necessary to comb the Navy for the best swimmers: Olympic and national champions being in the forefront. In addition, new techniques, technology, and equipment had to be produced, including a multi-man submersible craft and a re-breather unit, invented by a University of Pennsylvania medical student, Christian Lambertsen, which permitted lengthier periods underwater, using recycled air, and left no trail of telltale bubbles as regular SCUBA equipment does.

Even as its early training was conducted in the Potomac River south of the Nation’s Capitol, the now-designated Maritime Unit expanded into additional operational areas which covered basic and special operations training, parachute/airborne certification, weapons and demolition, communications, foreign language skill development, cultural briefing, and familiarization.

Inasmuch as it took time to train proficiently in all of these areas, it was somewhat later in the war that the organization actually got into action. Once it did, however, it rapidly made its mark in the war effort (especially pleased were the British) with a number of initial successes in the Mediterranean and Adriatic Seas against German occupied islands, in Italy and the Balkans. These successful   missions included waterborne as well as airborne operations, obtaining intelligence, engaging in sabotage and rescuing escaped prisoners of war and wounded from behind enemy lines.

Unfortunately, with success also comes failure. Given the vagaries and vicissitudes of war, it was to be expected. One mission resulted in the capture of one of the earliest and most experienced operatives, Jack Taylor, who was tortured by the Gestapo and spent time in two different German concentration camps, including the death camp at Mauthausen, which he barely survived to later testify in war crimes trials. Yet others were killed in action, training, and accidents.

Following the war, many of the files and reports on these operations were classified; however, author Patrick K. O’Donnell, in the course of researching another project, found them in the National Archives and has produced a book that is an interesting, relatively quick, and easy read and does not get bogged down in a lot of technical jargon.

Besides a prologue, the book is divided into three sections covering the sea, air, and land operations described, an epilogue and a summary of the postwar careers of many of these early SEAL warriors. There are five maps that pinpoint the training centers in the Washington, D.C., area and the combat theaters of operations. The photograph section includes many of the characters highlighted (including Italian combat swimmers who came over to the Allied side after Italy’s surrender) as well as equipment and technology.

The author’s notes are not terribly extensive and tend to primarily cite quotations in each respective chapter. Do not let this deter you from reading this volume. Given his penchant for writing about little known incidents and special operations, he gained the trust and confidence of surviving OSS men who were additional sources of information. O’Donnell was named a member of their postwar OSS Society and granted the Society’s 2013 Waller Award for scholarship in Special Operations History.

Although not the first book published on these “first SEALs,” this volume provides a well-written, inside look into the early days and development of modern United States specialized forces.