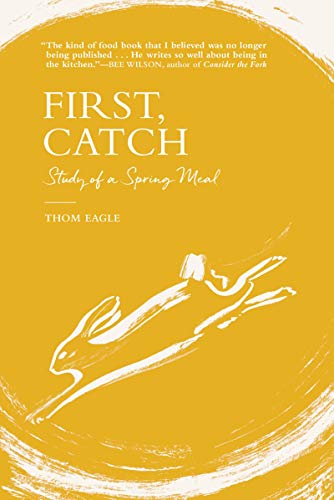 Why did this book take two years to cross the Atlantic? Perhaps the British publisher thought that we wouldn’t appreciate a book about food that frees itself from the formula, so beloved on this side of the pond, of 150 recipes, minimum text, and lots of glossy photographs.

First, Catch is not your typical cookbook. Ostensibly it explains how to cook a spring menu of nine dishes built around a rabbit ragu. The author, Thom Eagle, meanders very slowly through preparing his menu of pickles, fish, vegetables, ragu, blood dessert, and cheese. He saunters down numerous sidetracks, which allow him to discuss many parallel subjects.

This book is a tangential foray into the world of food, cooking, and eating. The chapter headings all begin with the word “On:” On curing with salt, On almost frying, On food, and so on. Nothing in the process of cooking this meal is overlooked, from the importance of salt, the cutting of onions, the cooking of potatoes, to the boiling of water. After reading this book you will never nonchalantly boil water again.

Eagle’s digressions have him tackling important, moral subjects, too. He explains his return to eating meat, and why, despite their documented intelligence, he continues to eat pork and octopus. He encourages us to think about how the animals we eat lived, and the voyage those fruit and vegetables took, before they arrived in our kitchen. He points out the dangers faced by commercial fisherman in their work and argues, in exhaustive detail, the case for eating rabbit. In short, he wants us to re-examine and respect what we eat. His aim is to convince us to take time, to think, and most importantly, to pay attention to every aspect of our food.

This book has no recipes in the familiar sense of headnotes, lists of ingredients, and methods. In Eagle’s view, “there is so much that recipes miss. The satisfaction of peeling a ripe, thick-skinned tomato, for instance, or unzipping a pod of broad beans; the smell of rosemary hitting gently warming olive oil . . .”

Described as a chef and fermenter, Eagle is more importantly a thinker and a philosopher who cooks. Luckily for us, he writes about cooking, too. While he is opinionated, and you won’t agree with him on everything, he is practical, informative, and has a sense of fun. Eagle loves food on the plate and on the page. Everything about food interests him: its taste, its history, and the culture and meaning behind what we eat. In what other food book would you find mentions of Lawrence Durrell, Wind in the Willows, blood, and bacteria? And he is not a food snob, admitting he once ate so much chocolate he couldn’t breathe.

First Catch is beautifully packaged, with delightful, simple illustrations. This engaging book belongs on the bedside table as well as in the kitchen. Free of intimidating photographs, it will liberate you from performance anxiety when you cook and allow you to revel in the process, appreciating even the smallest details. It will make you a better cook. As Eagle says, “If nothing you make is designed to last more than ten to fifteen minutes, there is no point aiming for perfection and you are therefore free to concentrate on more trivial things like interest and enjoyability . . .”

Let’s hope he decides to write menus for the remaining seasons very soon.