The Firemaker (Murder in China) 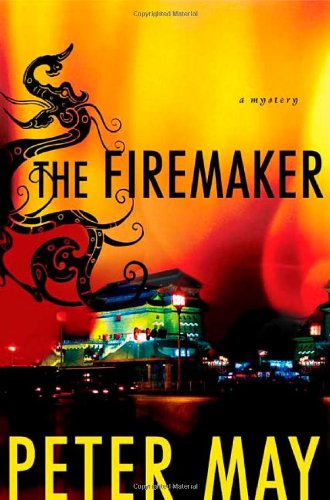 Originally published in 1999, this reprint of The Firemaker by Peter May is the first in The China Thrillers series and offers Mr. May’s recently acquired fans the opportunity to enjoy a series that is part mystery and part cultural history.

Dr. Margaret Campbell, forensic pathologist, accepted a six weeks’ stint lecturing at the University of Public Security. Although she tells Dr. Bob Wade, another American lecturer, that she took the job because of a fascination with “The Mysterious East and all that,” that reason is not even close to the truth.

The real reason for her decision to come to China was the same reason why she failed to fill out the declaration form on the plane before she arrived. “She had nothing to declare, except for a broken heart and a wasted life—and neither of these, as far as she was aware, was infectious, contagious, or carried in the blood.”

In plain English, which Margaret uses far too often for the more subtle-speaking Chinese, she could have mentioned a philandering husband and a life spent married to her job until learning what an unfaithful jerk her husband has been and how blind and stupid she has been. At that point her life falls apart, and China is a way to leave Chicago and her failed life behind her.

She is also failing herself. She fails to read any of the material Dr. Wade sends her on the political and cultural aspects of China, and makes several blunders that her Chinese colleagues find offensive. May uses Margaret’s ignorance of all things China as an opportunity to explain much about the nation’s culture and politics.

May’s approach does make Margaret appear not only ignorant, but arrogant and lackadaisical toward her new job. It also makes her less realistic. She is, after all, a hard-driving, ambitious professional, an intellectual who is well-known in her field. Her professional achievements and her shallow understanding and insensitivity are incongruent.

However, the male protagonist, Deputy Section Chief Li Yan, also demonstrates some arrogance of his own. The first meeting of this unlikely pair hurling verbal abuse at Margaret’s tiny female driver after the car collides with Li’s bicycle. Margaret comes to the defense of her driver and her Chinese escort. “This guy got something against women drivers?”

The three Chinese are shocked by Margaret’s sarcasm. As Li rides off he spits out “Yungguizi!” meaning foreign devil.

Margaret, in the meantime, finds herself on the defensive as both her driver and her escort, Lilly, berate her. She has caused Li Yan to lose face, something one should never do. She is incredulous that the two women would take such abuse so meekly. On the other hand, high-ranking police officer or not, Li Yan was abusive.

Li Yan vetoes Margaret’s help with the burned victim found in one of Beijing’s parks. It is a suicide, a particularly unpleasant one, but no reason to ask for or accept the aid of a foreign pathologist.

Li Yan is overruled by his superior, as well as chastised by his uncle, legendary revered retired police officer Yifu. Li attends the autopsy as he is required to do, but he isn’t happy about it. He is reluctantly impressed when Margaret finds a clue to the victim’s identity from an examination of a ring, but he is stunned at her conclusion as to cause of death. The victim was hit over the head, injected with ketamine or heroin, then set on fire.

Two more bodies appear, dead by different means, but both murdered. Li believes the three men are related in some way despite being from different classes and circumstances. A single American cigarette is left behind with each body. The killer is too careful not to have left those cigarette butts deliberately.

Li and Margaret work together, at first at arm’s length and reluctantly, then an attraction grows between them. Neither welcomes it; they are too different: different races, different cultures.

Li has other difficulties in his life besides his growing desire for Margaret. His uncle, Yifu, has sent a feng shui man to rearrange Li’s office to be a more pleasing environment. Li is appalled and embarrassed. Feng shui is no longer approved by the Chinese government.

Also, all the detectives in his command find the presence of Margaret to be fascinating, and Li’s reaction to her very humorous. Li is embarrassed and infuriated. His well-ordered life within the rigid Chinese society is coming off the rails.

Li’s homicide case is becoming more puzzling. Margaret is certain the burned victim was dying of AIDS, and Margaret wants to do blood tests on the other two homicide victims to see if they also had the disease. When she and Li return to the university’s morgue, they are told by the head pathologist that the bodies and tissue samples have been burned.

That is not possible in Li’s experience. Dr. Wang was told by someone to destroy evidence, and Li’s suspicions fall on a high Chinese official. Margaret supplies a motive that involves genetic engineering and a gigantic cover-up. Soon Li and Margaret find themselves on the run to escape a hired assassin and warn the rest of the world.

May’s series is the first set in Beijing, and his frequent trips to China and his access to Beijing police procedures lend his novels authenticity. His Author’s Introduction provides his methods of research for The China Thrillers.

The Firemaker succeeds as a thriller without a doubt, but as a cultural document, the novel proves a picture of Chinese society in 1999, as well as some insights into cultural philosophy, such as the fact the Chinese are expected to subjugate the individual for the general good.

A fascinating book that will hook fans on several levels.