The Fireballer: A Novel 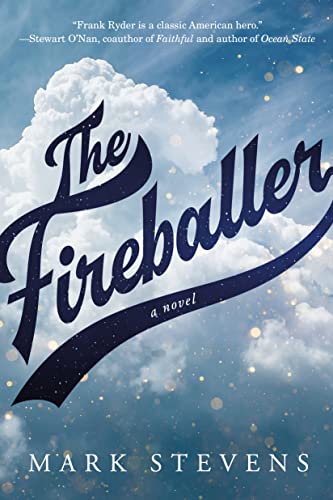 “When I knocked a guy down, there was no second part to the story.”
—St. Louis Cardinals and Hall of Fame pitcher Bob Gibson

Like the game of baseball, the great American pastime, there is much to love in The Fireballer by Mark Stevens. This is a well-written novel that explores the various aspects of the game. In 2023 Major League Baseball (MLB) will introduce a number of changes, from increasing the size of the infield bags to monitoring the amount of time a pitcher takes in between pitches thrown. We have already seen the influence of the pitch count on how the game of baseball is managed and played. What if there was a limitation placed on how hard and fast a pitcher could throw? There is always the possibility that speed could kill. What might happen if a player was struck in the head by a ball?  On August 16, 1920 Carl Mays (Yankees) threw a ball that killed Cleveland shortstop Ray Chapman.

In The Fireballer Stevens introduces us to Frank Ryder, a fictional player on the Baltimore Orioles, who is haunted by the ghost of Deon Johnson, an African American boy he accidentally kills when they both were playing little league baseball in Atlanta. Johnson’s race plays a key role in the novel.

A few years after the tragedy in Atlanta, Frank Ryder is an outstanding rookie pitcher trying to help the Baltimore Orioles become a winning franchise again. Ryder is having the type of dominating season the Hall of Famer Bob Gibson had back in 1968 when he pitched for the St. Louis Cardinals. One wonders if Gibson is the model Stevens used when he began writing about Ryder. Ryder’s story is just one part of the novel.

Stevens’ book looks at the role owners play in shaping and controlling the game. If there is more money to be made then there must be a balance between hitters and pitchers. Ryder’s pitching skills have started to change the equation, so MLB owners want to change the rules, maybe instruct a player to only throw so hard. They believe the fans want to see players get hits and score runs. But how can one simply change rules of the game while overlooking the unwritten rules of baseball? One unwritten rule is that when an opposing pitcher hits a player then that player’s team must retaliate when they are back on the field.

This is the dilemma Ryder has in a game against the Tampa Rays when he faces the outfielder Billy Jaworski. When Ryder’s team was batting their star player, Julio Diaz was hit by a pitch that broke his wrist. Now as Ryder throws a speeding fastball it leaves his hand and crashes into Jaworski’s ribs; he is flattened and does not move. Has Frank Ryder killed another player?

The Fireballer is a baseball book that explores trauma and mental health. It’s also a love story between Ryder and his girlfriend Maggie Moore, and also a novel that wants to provide hope to young people. The novel is as well about the city of Baltimore. Not just the Baltimore of Oriole stars like Jim Palmer and Brooks Robinson, but the Baltimore of Freddie Gray whose death in 2015 led to 17 days of protest and rioting directed against the police.

Mark Stevens’ novel is a story seeking answers. Why does Ryder begin to suddenly have problems pitching? It is not surprising to see the main character in a novel returning home. Ryder returns to Atlanta to visit the grave of Deon Johnson as well as find his mother Gail. Can one be forgiven? How important is it to defeat the demons of guilt in order to move forward with one’s life?

The Fireballer throws a nice curve at the reader when Frank Ryder accepts an invitation to visit the Lockerman Bundy Elementary School (as well as a nearby church) from taxi driver Martha Greer. Often celebrities visit schools and hospitals encouraged by their agents. Ryder, because of his own troubled youth, wants to make a difference. It is Greer who reminds him to remember how much young people look up to him. If Ryder tells young people listening to him to try and reach their full potential then he cannot agree to owners trying to limit what he can do on a baseball field.

There is no foul territory between the fiction of Mark Stevens and the real baseball world. He makes countless references to real people and events. The Fireballer is a well-researched baseball novel.

Stevens skillfully knows how to describe the game in detail while adding suspense. As the Baltimore Orioles find themselves within striking distance of going to the World Series this is how Stevens describes the early days of September:

“Ryder gets sharper by the pitch, by the inning. His pitches appear to gather steam as they come into the zone. They waffle, flutter, dive and rise. Ryder keeps his gaze riveted on Wyatt’s glove as he moves it around the zone. Ryder focuses on the next pitch he’s going to throw. He doesn’t fear random thoughts.”

A baseball player only plays for a short period of time, especially those pitchers who throw the hard fast one. Too many are forced to have Tommy John surgery in order to reconstruct their arms. This doesn’t happen to Ryder because Stevens has his main character thinking about things that are larger than baseball but still the size of hope. The Fireballer is about one glorious season in baseball. No way a reader will find this book boring or have the desire to speed it up by turning the pages quickly. Stevens gives us a book to enjoy like it was the seventh game of the World Series and your team won.