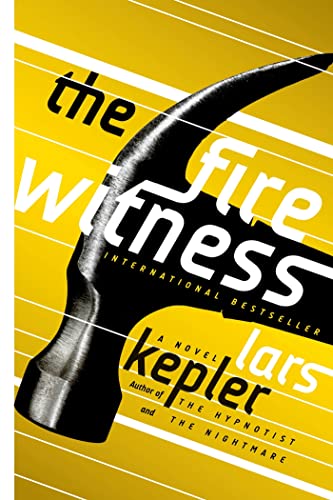 Like a pack of cigarettes, any crime novel by Lars Kepler should come with a warning label: this product may be hazardous to your health. If consumption begins in the late evening, sleep deprivation may result. Indeed, any reader expecting to read a chapter of The Fire Witness before bed will find himself still reading at sunrise. It is one of those rare novels that is truly is difficult to put down.

Flora Hansen communes with the dead for a fee, but when she begins to see a real ghost, she immediately connects its appearance with a horrific murder at an institute for troubled girls. She calls the police tip line, but is written up for making false claims in a murder investigation.

Joona Linna, under internal investigation within the police department, is sent to the institute as an observer with no authority to interfere. Joona ignores his status as observer and examines the crime scene, agreeing that Vicky Bennet, 15, who escapes during the night leaving behind a bloody hammer under her pillow, is the probable murderer of both Miranda, another troubled girl, and the older care giver, Elisabet. “Miranda was sitting in a chair when she was killed, Joona thinks. Elisabet, wearing pink socks, was hunted across the yard and into the old brewery.”

The hunt for the missing Vicky Bennet intensifies when she steals a car and drives off with four-year-old Dante, son of Swedish church minister Pia Abrahamsson, in the back seat. No one can predict what Vicky might do to the little boy, and no one can find the stolen car.

When the car is found submerged in the river, the police conclude both Vicky and little Dante were swept away and drowned. The case is closed: Vicky is both a murderer and a kidnapper. Joona is not so sure. The evidence against Vicky is indisputable, but he wants all the loose ends tied into a neat little bow and they are not.

The Fire Witness is one of the best as Mr. Kepler weaves together the loose threads of Flora Hansen’s visions of a ghost, Vicky’s past betrayals by people she trusted, and the still unanswered question: who really killed Miranda and Elisabet?