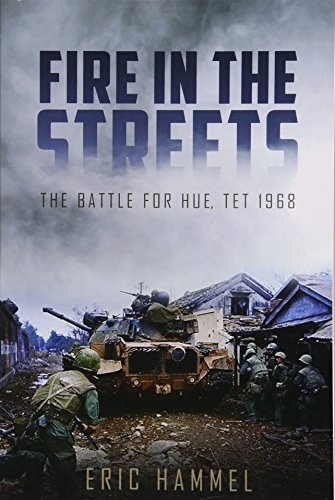 “The 50th anniversary . . . should be retold as a tribute to these long forgotten heroes that answered their county’s call in this controversial war.”

This year marks the 50th anniversary of the Tet Offensive of 1968, long considered by pundits and historians as a major turning point in the Vietnam War. The surprise North Vietnamese offensive was conducted across all of South Vietnam, but no city was harder hit than Hue, the ancient imperial capital and safe haven from most of the fighting that had raged across the country since the introduction of American and North Vietnamese troops into the theater.

Casemate Publishing has reissued this classic book, written by noted Marine Corps Historian Eric Hammel with updated maps and photographs to commemorate one of the Corps’ toughest campaigns of this long war. The saga of the month of bitter combat by U.S. Marines, army troops, and their South Vietnamese allies to retake the city after its quick capture by North Vietnamese and Viet Cong forces remains a remarkable tale of improvisation and courage.

When the Tet Offensive began, Hue was a placid oasis that had remained mostly undisturbed by the growing combat in the northern provinces of the country. All that changed in January 30, 1968, when North Vietnamese forces seized almost the entire city, including the old Imperial City and its thick-walled Citadel. During the month of combat until South Vietnamese control was restored, both sides suffered from bad intelligence, miscalculation, and missed chances as most of the city was reduced to rubble.

Initially, many Marines and soldiers were eager to finally have a chance to engage their often elusive enemy in combat after suffering endless casualties from booby-traps, ambushes, and sniper attacks in the jungles and hill sides. This idea was quickly replaced with the wariness and exhaustion of combat in an unfamiliar environment that neither side trained for nor expected to engage in a prolonged struggle.

The Marines quickly adapted and attempted to follow “The three basic rules for conducting combat in a built-up area . . . isolate the battlefield, seize footholds, and conduct a systematic clearing operation.” Unfortunately, all of these actions required enormous amounts of men and material that were not available until late in the battle as U.S. and South Vietnamese forces had to regain control of large swaths of the county.

As both sides continued piecemeal reinforcements, each city block became a meat grinder that quickly consumed entire platoons and companies of infantrymen. The combat narrative is amazing as Hammel describes the grind of urban combat where death can come from almost any direction and the notion of front lines becomes muddled. The unleashing of superior American artillery and air power made a significant difference in turning the tide of the battle, but it also contributed to the devastation of most of the city.

By the time the battle was officially declared over on February 26, 1968, over 10,000 soldiers from both sides were killed or wounded in the month of close quarters combat. In addition, thousands of civilians were also dead, wounded or displaced, including thousands of South Vietnamese policemen, bureaucrats, and other people deemed political targets by the Viet Cong, who sent dozens of troops into the city with rosters of civilians deliberately targeted for assassination.

Most especially, this book is a tribute to the American and South Vietnamese platoon leaders and riflemen who fought block by block to liberate the city and rescue its trapped population. Hammel’s recounting of their courage and sacrifices are remarkable and remain a tribute to the Marines who form the centerpiece of this book. The 50th anniversary of the many individual fights that took place in this city should be retold as a tribute to these long forgotten heroes who answered their county’s call in this controversial war.