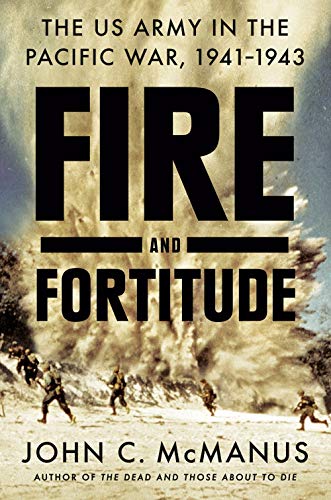 “a comprehensive and readable narrative of the Army’s critical role in achieving victory over Japan.”

There are dozens of books published on World War II every year, and sometimes one of them comes along that truly stands out by covering an underserved topic. This book is one of those—covering the role of the U.S. Army in the Pacific Theater, where the American military historiography has long been dominated by studies of the U.S. Navy and Marine Corps. John C. McManus has written the first of what will hopefully be a two-volume set providing a comprehensive and readable narrative of the Army’s critical role in achieving victory over Japan.

As he points out in the prologue, by the end of the war nearly 2,000,000 Army personnel were in the Pacific Theater, spanning all the way to China and India, where they served from the jungles of the Southwest Pacific to the distant islands of the Alaskan Territories. This book does a remarkable job of furnishing the rest of the story of America’s fight against the Empire of Japan.

When Pearl Harbor was bombed, the Army in the Pacific, like the rest of the American military, was just coming out of the slumber of the Great Depression and was completely unprepared for the intensity of the initial Japanese offense. The invasion of the Philippines, then an American territory promised independence by 1946, caught the American and Filipino defenders off guard and dealt the U.S. its first major defeat of the war. The bravery and agony of those troops, holding out knowing that no relief or support was coming, is a story about the consequences of military unpreparedness and underestimating the enemy.

Once the defenders of Bataan and Corregidor are forced to capitulate, their tales of deprivation in captivity are bluntly told, particularly the severe cruelty and near slave labor conditions imposed on the Americans by the Japanese, who considered surrender a shameful condition. The heavy casualties of the Pacific war would be directly affected by the unwillingness of Japanese garrisons, even when their situation was clearly hopeless, to fight literally to the last man with wounded soldiers often committing suicide rather than surrendering to American troops.

Undoubtedly, any narrative of the U.S. Army in the Pacific is dominated by the shadow of General Douglas MacArthur, the senior Army officer in the theater and eventual commander of all Allied forces in the Southwest Pacific Area, covering Australia, New Guinea, and most of the Solomon Islands. On the whole, McManus provides an unflattering portrait of MacArthur, whose outsize ego and obsession with personal glory significantly overshadows his qualities as a commander and symbol of Allied resolve.

Ordered to leave the Philippines before the fall of Bataan and Corregidor, MacArthur sets out to return to the islands as quickly as possible, even at the expense of other Allied global strategic objectives. McManus provides some of the seamier sides of MacArthur’s actions, particularly his mania for not sharing the limelight of victory with his subordinates and his need to surround himself with sycophantic staff officers.

What makes this volume stand out is that McManus covers the full range of subjects concerning the Army’s rebuilding and initial offensives in New Guinea and the Solomon Islands in 1942 and 1943. The relationships with the two major American allies in the region, Australia and China, also receive a great deal of coverage, particularly the contentious relationship between General “Vinegar Joe” Stilwell and Chinese National dictator Chiang Kai-shek.

Although the relationship with Australia would become as close as America’s relationship with Britain in the European Theater, the Nationalist Chinese were more focused on the expected post-war struggle with the Communists led by Mao Zedong than fighting the Japanese.  General Stilwell was continually frustrated with the enigmatic Chiang, who refused to engage the Japanese in serious combat, yet was continually asking for American logistical support and air power.

As the Army built up its forces and began to push back the edges of the Japanese advance, American soldiers were forced to fight in some of the harshest terrain of the war, and as McManus notes, the jungle environment caused nearly as many casualties as the Japanese as disease, hunger, and various parasites caused over half the casualties of troops fighting in New Guinea and up the Solomon Island chain. The Army had to develop significant medical and logistical capabilities to support these offensives as soldiers encountered a steep learning curve against experienced Japanese troops.

As both officers and soldiers became experienced and the Army as a whole became better acquainted with the challenges of amphibious warfare, the book ends with two lesser known, but critical island campaigns as the U.S. completed its 1943 buildup and prepared for the critical 1944 campaigns.

In Attu, an island in the Alaskan Aleutian chain, American forces defeated the only Japanese force to occupy American territory during the war. The harsh terrain prevented the use of armor and limited the use of artillery, so American infantrymen had to assault fortified Japanese positions in formidable high ground, the only winter fighting encountered by American troops during the war. In Makin, the Army conducted its first major Central Pacific island invasion, capturing the island at the same time the Marine Corps was fighting its way off the beaches of Tarawa.

For students of World War II, this is a long overdue book. As the book ends, the U.S. Army and Army Air Force have completed their initial trial by combat and are now prepared to be critical parts of the anticipated 1944 offensive to send the fully mobilized American war machine closer to Japan.