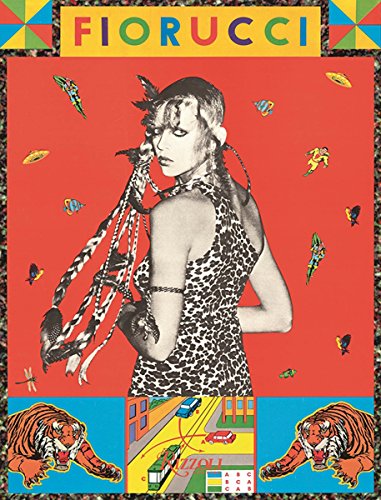 It’s a bit difficult to wrap your head around that fact that Fiorucci is celebrating its 50th anniversary. Of course that emotion can really only be felt if you grew up with what was then one of the hottest labels and most incredibly amazing and innovative retail establishments and experiences ever to come along.

This celebratory book is primarily about the visuals of every aspect of Fiorucci. No matter how wonderful and nostalgic the photos and images might be, it is almost impossible to convey or rekindle the mood, moment, and exhilaration that was Fiorucci. Unquestionably part of that emotion is linked with the sensory memories can be attributed to those who participated and lived during these wildly frenetic times. Fiorucci was unchartered territory at the time, and it burst through every preconceived notion about retailing and branding that preceded it.

Even though there is a rebirth afoot at this time, it is difficult to believe that the fervor and excitement can be repeated—especially at the same level that they once achieved. To say that Fiorucci captured the zeitgeist of the time would be like saying the Vatican is just another church.

To truly understand and grasp the importance of the brand during the 70s and 80s this is a book that absolutely must be read. The selection of those who are interviewed are the people who were integral to the pervasive and unrivaled success of the brand. One of the most enlightening interviews is with Oliiviero Toscani, who truly provides context and insight into the business and its players as well as into its founder, the late Elio Fiorucci.

For those who hunger for knowledge of one of the greatest juggernauts of fashion then this is a book you absolutely must read. The more informed reader might deduce that Fiorucci was a precursor of fast fashion using original designs rather than knocking off trends. It is safe to say that Fiorucci was a once in a lifetime fashion phenomenon.