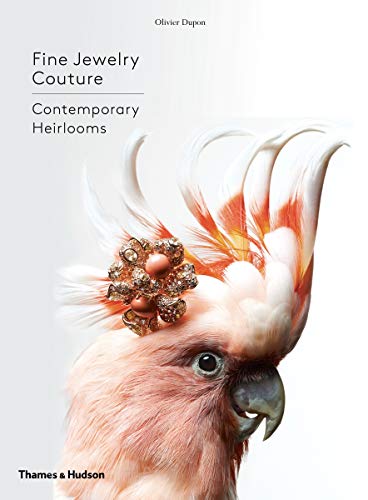 Olivier Dupon has curated a selection of some of the most talented and creative jewelers from around the world and their oeuvres. Most of the names are unfamiliar, but that is of little matter given the expertise, perfectionism, and skillset that is involved in the creation of each piece.

What seems to be a common thread is that a majority of the featured pieces reflect a more thematic tone rather than just the more classical nonspecific fine jewelry such as an all-stone bracelet or a large stone gemstone ring. There was a sort of visual repetition of styles among the chosen works.

Another interesting facet, pun intended, is that of the 35 designers most, if not all, use more colorful stones rather than just the traditional diamonds, emeralds, rubies, etc. Staying on this track, the reader might also notice a shortage of pieces with extraordinary gemstones that usually inhabit books of this genre.

One cannot help but notice the influences of some of the greats such as Schlumberger or Taffin or even Belperron and Verdura. Dupon makes a point of stating his designers are the cream of the crop when it comes to jewelry designers when viewed as the most inventive and creative from around the world. They might be wildly creative but surely not the absolute of best of the best. In other words, if the reader wants to see the works of the crème de la crème, they should be reading Jeweler: Masters, Mavericks, and Visionaries of Modern Design as it showcases some of the most exquisite pieces created by the most inventive and astoundingly talented jewelers from around the world. Let’s just say that Fine Jewelry Couture: Contemporary Heirlooms is a kissing cousin to that volume—which should not discourage the reader from exploring Dupon’s offering.

Fine Jewelry Couture: Contemporary Heirlooms stands on its own in the genre as the reproduction quality is beyond criticism and the text surely affords the reader a sort of mission statement about each brand and its designer as well as a brief biography of each.