Finding Zsa Zsa: The Gabors behind the Legend 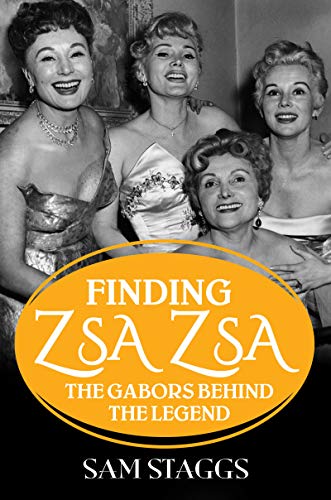 “To Boomers, the Gabor sisters were a TV staple. . . . For decades they were Hollywood blondes and Broadway glamour gals. And then they were no more.”

To Boomers, the Gabor sisters were a staple on Merv Griffin and Jack Paar’s Tonight Show. For decades they were studio blondes in Hollywood and glamour gals on Broadway. And then they were no more.

Zsa Zsa always had a ready quip. Advice for a broken engagement? “Give back the ring. Keep the stone, but give back the ring.” To a 1950s quiz show host who complimented her jewelry, “Dahling, zese are just my vorking diamonds.”

The Gabor sisters Magda, Eva, and Zsa Zsa were not famous for being famous the way that shallow celebrities today are. They worked at it for decades.

They spoke multiple languages with ease. They raised vast sums for charity, war refugees, and animal welfare, often without taking credit. And they ran successful businesses. Mother Jolie invented costume pearls decades before cultured ones hit the market. She made a fortune. But more importantly she made connections, and both her jewelry stores and her home soirées attracted wealthy patrons eager to make connections, too.

In the atmosphere before World War I she required a certain ruthlessness. Assessing her future husband, Vilmos, and his gift of a diamond and sapphire studded choker Jolie thought, “Wouldn’t it be wonderful to have all this jewelry without the man.” Approaching the age of 50 and having married off her three daughters, Jolie got “the divorce she’d coveted since her wedding day.” Thereafter, she and Vilmos were the greatest of friends.

Divorce would later prove amenable to the rest of the Gabors.

Zsa Zsa gets the most attention in these pages. Author Sam Staggs is a Hollywood biographer and family friend of the Gabors. While this gives him unique access, especially to Zsa Zsa’s daughter, Francesca Hilton (from husband number two, the hotel magnate Conrad Hilton), it sometimes leaves him open to questions of objectivity. His prose can also veer to 50 cent words (“mephitic,” “testudo,” “otiose”) and cringe worthy similes. Staggs establishes his narrative frame in an introduction titled “Five Nights in the 50s” in which he takes a single event to encapsulate each member of the family.

He then starts with the family’s escape from Hungary in the 1940s. Like many 19th century Jews the Grüns had converted to Catholicism and changed their name (Gabor in Hungarian means Gabriel). They rose to prominence in New York and Hollywood, all while maintaining their glamour and relentless media presence.

Among them the sisters churned through 23 husbands. “Marriage is too interesting an experiment to be tried only once or twice,” Eva said. But marrying much older men seemed to express an Elektra complex, and Eva even had a marriage to the deeply closeted Merv Griffin.

Eva was passionate about acting. But like Marilyn Monroe, no one took her seriously despite dozens of successful screen and stage roles. It was TV that made her a household name, Green Acres providing “steady work and a large income for six seasons” through 1971. By the 1960s, Zsa Zsa was making “the kind of movies that made people stay home and watch TV.” But then the demise of the studio system had ended many careers. She returned briefly to Broadway in 1970 in Forty Carats, once again mobbed by fans and autograph seekers.

Zsa Zsa is remembered for two films, Moulin Rouge, in which she played Jane Avril to José Ferrer’s Toulouse-Lautrec, and Queen of Outer Space. The latter camp classic features Venusian beauties on a planet devoid of men marching through jungle terrain in chiffon cocktail dresses, spike heels, and ray guns. Zsa Zsa doesn’t play the queen, but an eminent scientist(!) As she and the earthmen trade blaster shots with the Queen’s man-hating entourage she sidles up to the captain to say, “Oh Dahling, vhy don’t ve go away and find a new planet?”

She spent time in West Hills sanitarium and may have suffered from undiagnosed bipolar disorder. Afterward she “often seemed not fully aware of what she did.” The book features 22 photos including one of the court room sketches that Zsa Zsa made during her 1989 trial for slapping a Beverly Hills policeman, that of plaintiff Officer Paul Kramer.

Husband number six created Barbie’s companion doll, Ken. Husband number seven “happened to be the lawyer who had finalized divorce number six,” while husband number nine, an ersatz prince who had more thirst for publicity than all the Gabors put together, even made her funeral mass all about him.

He had gained full control of her wealth and kept her bedridden, drugged, and incommunicado. His machinations left Zsa Zsa’s daughter Francesca homeless and penniless. Repeatedly, the Gabors had the world at their feet only to have the bottom drop out a moment later.

A final note: At the age of seven this reviewer, in tow with his mother and sister, met Jolie and Zsa Zsa at the A.S. Beck shoe store in Manhattan. They were both very nice to me.