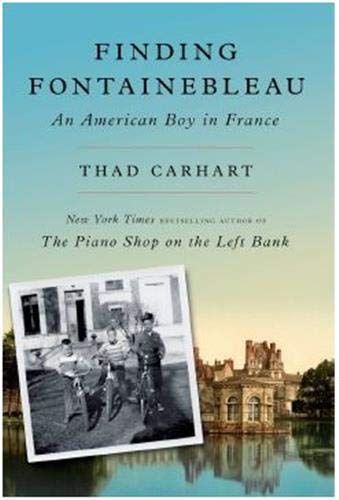 Thad Carhart seems to have led a charmed life. He has also written a charming memoir about it, or at least a part of it: a sojourn in France in the mid-1950s, when he was young and impressionable, when France wasn’t what it is today and what it will never will be again.

Indeed, there’s a delightful fairy tale feeling about Finding Fontainebleau, though Carhart is also scrupulous about history and quotidian reality, from furniture and architecture to cars, clothes, and cuisine.

One might also call this book a classy love story. As a boy, Carhart fell in love with the chateau and the village that both carry the magical name “Fontainebleau.” In Carhart’s view, the chateau—covering five acres and boasting 1,500 rooms and 1,985 windows—sums up a whole society and a way of life. By preserving it, he argues, the French have preserved their inimitable heritage.

As a boy, Carhart fell in love with the French language—his book is peppered with French words and expressions—and French culture, so much so that when he was an adult with a wife and children of his own he took them to France and to Fontainebleau.

Carhart lives in Paris today. He has previously written about the city of light in The Piano Shop on the Left Bank. He’s also the author of an historical novel, Across the Endless River, in which the main character is the son of a

19th-century French frontiersman and an American Indian woman, none other than Sacagawea who guided Lewis and Clark across the continent of North America.

Finding Fontainebleau moves nimbly back and forth from mid-20th-century France to the annals of French history, beginning in the 16th century and then moving along swiftly from the 17th to the 19th.

And what a history it is! Almost every crucial French historical figure shows up in these pages, from Henry II, his wife Catherine de Medici, and his mistress, Diane de Poitiers, to Louis XVI, Marie Antoinette, and Napoleon Bonaparte. Charles de Gaulle makes an appearance, along with a handful of French Communist Party members who scrawl slogans on the walls of Fontainebleau that say, “Yankee, Go Home.”

The author and his family didn’t take the words personally and departed for home on their own timetable.

The past that Carhart writes about is sexy and melodramatic. The present day tends to be rather prosaic and domestic, though the adventures of Thad’s family in France in the 1950s make for entertaining reading and might be turned into a dramatic sitcom.

The author has a light touch even when he explores subject such as court intrigue, class, and revolution. And he’s not fastidious or prudish, either. Fontainebleau, he explains, “relied on a system of intense human labor, not the least of whose expression was the need to carry away daily mountains of human waste.”

Finding Fontainebleau affords the reader the luxury of staying at home and yet enjoying vicariously the experience of living in another country. Indeed, if you can’t travel to France this summer, you might follow Carhart’s romp through French manners and French morals.

For those who enjoy French food, there are mouthwatering descriptions of saucisson, bauguettes, vin rouge, and fruit tarts. The whole book adds up to a delicious taste of a culture that’s strange and yet familiar and that has allured Americans from the time of Benjamin Franklin and Thomas Jefferson to Ernest Hemingway and F. Scott Fitzgerald. Carhart takes his place in a long history of Yankees who have fallen in love with the French.