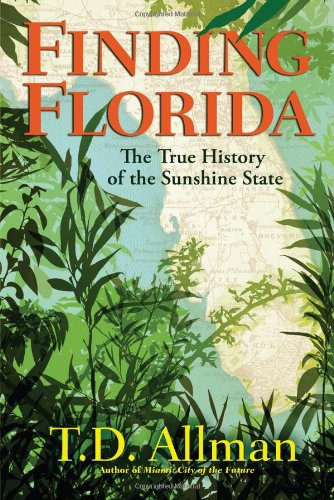 “Reading this book shatters nearly every myth about Florida . . .”

Why would people other than history buffs want to read a book about the past of a state they don’t live in? T.D. Allman is so good a writer he makes the question irrelevant.

Mr. Allman, a Florida native, writes compellingly about the state many people think they know all about: the pristine beaches, the Miami night life, the Disney adventures for which millions of people stand in line, the palm-studded PGA golf resorts, and the gated retirement communities. Most of the eastern half of the country comes to Florida sooner or later to visit Disney, the beaches, the club scene in South Beach, cruise the Caribbean, attend a mid-winter conference, visit a retired parent (or retire oneself), even to ride an airboat through the Everglades.

But the ironic title of this book Finding Florida: The True History of the Sunshine State takes the reader diving way below the shiny surface of the state’s image into the depths of a past so dark it has been largely expunged from the history books.

Thanks to Mr. Allman, much of Florida’s inglorious but extremely relevant past has now resurfaced.

Who knew that more U.S. soldiers died fighting Indians in Florida than in the entire Indian wars west of the Mississippi, including Custer’s Last Stand? The Seminole Wars, conducted in stages over a period of 30 years was, writes the author, “the bloodiest conflict the United States fought during the nineteenth century,” including the War of 1812.

In the phase known as the Second Seminole War, 1500 American soldiers, most of them Irish immigrants, died serving the notion that Florida was being cleansed of its Indian population in order to attract settlers and prepare Florida for statehood. Untold numbers of Seminoles and escaped black slaves that lived in harmony with them were slaughtered. Hunting the Indians was sport. Captured warriors had a bounty of $500, squaws were $250 and $100 was given for Seminole children.

Florida’s white civilian population made money provisioning the militias. The Seminole Wars, portrayed as part of white man’s noble quest to “civilize” the country was, says the author, Florida’s “crucible of dishonor.”

But the most egregious example of voter disenfranchisement occurs in the Magic Kingdom.

Mr. Allman tells how the Disney corporation managed to maneuver state laws to create two phantom “cities” named for artificial reservoirs Disney engineers created by obstructing the area’s natural water flow. Disney’s lawyers then manipulated to strip each “city” of independence by mandating conformity to “plans, programs, resolutions and other actions adopted or undertaken by the board of supervisors for the District,” thus assuring Disney corporate control.

Moreover, the law Disney lawyers wrote required that each candidate for office in these “cities” must be the owner or trustee of property situated in the city in order to be eligible to hold the office of councilman—who in reality are just ciphers for the Disney corporation. Imposing a property qualification for public office contradicted the Florida constitution as well as the U.S. Constitution.

A legal challenge was made, but the Florida Supreme Court sided with Disney because of the perceived benefit of Disney to the state.

Mr. Allman pricks that mythology balloon, too. Disney World opened for business in 1971. A decade later a student at Rollins College in Winter Park, a municipality adjacent to the City of Orlando, conducted an investigation published as The Disney World Effect. “From 1970 to 1980, the wage level for the three-county area decreased by six percent, per capital expenditures on public services, including education and health declined, crime rose and orange production, once the mainstay of the area, declined to virtually nothing.”

So much for Disney enriching the state.

Tuck this book in your bag, and you’ll find the real Florida far more intriguing and complex than the one invented for tourists and fortune seekers.

Thank you, T. D. Allman, for so cogently revealing Florida’s ignoble past chicanery, ethnic cleansing of the Seminoles, as well as its inbred and continuing racism and disenfranchisement of its citizens.

Reading this book shatters nearly every myth about Florida and leads to a better understanding of why the Sunshine State continues to grab headlines and affect national and even international politics.

Kathy Hersh lives in Miami and writes on a wide range of subjects from environmental sustainability to bullying prevention. Her work has appeared in The Miami Herald, Mother Jones, and Woman’s Day. She is the producer of Michener at Work, a documentary about James Michener, which focuses on his research and writing process.