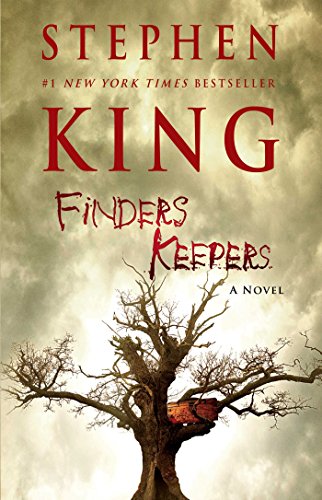 "Finders keepers" is a common idiom many use when they unearth something of value, not knowing its rightful owner. Such is the case with young Peter Saubers.

In 2009, the Saubers family endures hard times after Peter's dad loses his job. Father Tom, unable to land gainful employment, attends a career fair where he and others are run down by a psycho. Ending up almost paralyzed, Tom and the household sink deeper into despair both financially and emotionally. They can no longer afford the home they love, so they move to a less respectable part of town.

Turns out their new house had once been occupied by Anita Bellamy, a college lecturer and her son Morris. Morris, a bad seed, has a peculiar intelligence and is obsessed with the work of John Rothstein, a bestselling author who created the Jimmy Gold series. Rothstein, a known recluse, infuriates Morris with his last book; Morris believes the protagonist cops out.

Rumored the man penned additional volumes not published, in 1978 Morris, along with two buddies, breaks into the secluded farm house in New Hampshire where they murder the elderly man, stealing cash and many of his secret notebooks. His murder and robbery are never solved.

Later, after Morris is not able to acquire the millions he anticipates receiving for the prized writings, he rapes a woman in a drunken rage and is accorded a life sentence. The only thing keeping him going throughout the years is his chance of parole and regaining the notebooks and money he buried.

In 2010 Pete Saubers hits paydirt. In a time of distress over his parents' constant arguing, Pete heads to the woods to gain some peace and discovers a cave-like area, which he unearths, discovering what he considers a treasure chest and the answer to his folks' problems: Rothstein's writings and cash.

Pete hides the money, and every month he mails sums to his home with no note or return address. The Saubers, elated at their good fortune, do not question the benevolence of the gifts. Pete is not yet interested in the notebooks, for his main concern is helping his family out of their financial bind, until upon reading them, he becomes fixated on the writing.

More than three decades after the murder and theft, Pete decides to try to sell these treasures, not for himself, but mostly for his sister, Tina. Tina envisions something is off with Pete. She questions him about the windfall the family has received, not aware of the unpublished writings, but Pete discloses nothing to her. Though he feels in his gut something is amiss, he still believes in "finders keepers."

Little does Pete know about John Rothstein or Morris Bellamy. Morris has his chance to get paroled and, of course, his only wish is to reclaim Rothsteins' work. Demented from many years behind bars, his main aspiration is to find if Rothstein has redeemed himself.

Retired police detective Bill Hodges, along with his associates return from King's prior novel Mr. Mercedes to add color and unending suspense as they help save Pete and his family from a crazed madman. Though Mr. Mercedes may be considered second in a series, Finders Keepers very well stands on its own.

The king of horror again mesmerizes "Constant Reader" with a spine-tingling thriller with well-crafted characters and a compelling plot, never once letting down his audience.