Find You in the Dark: A Novel 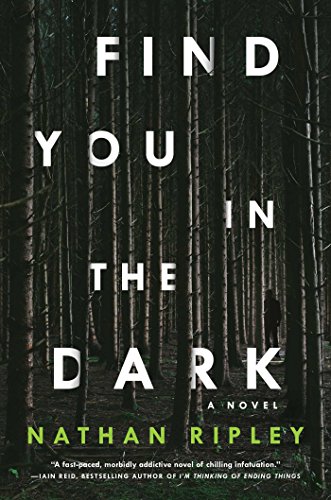 “a chilling story of a man who could’ve conceivably become a serial killer pitted against one who actually is.”

Martin Reese has a hobby that is as unique as it is extraordinary. Bribing a police detective to give him files on unsolved cases, he goes over them in meticulous detail, discovering clues the police missed. Retracing the killer’s steps, he finds bodies long-hidden, then anonymously notifies the police and with a final taunt, tell them where to find the corpses.

Martin’s reason? To give the victims’ loved ones’ closure. Early in his so-called “career,” while he was in college, he read about a girl named Tinsley Schultz’s disappearance. Then he discovered Tinsley’s sister was in one of his classes. Unconsciously or not, he made Ellen Shultz’s acquaintance, and eventually married her. Now they have a daughter, and she and Ellen are the things Martin loves most in the world; it’s his great sorrow that he has never been able to discover where Tinsley’s body is buried.

Sergeant Keith Waring supplies Martin with cold case files for a tidy sum. Martin passes Keith off as an old friend with whom he meets occasionally for drinks, during which he receives the files of his next “case.” He covers his searches as camping trips where he goes to “get away from it all.”

Currently, Martin’s discoveries have been rubbing a few detectives the wrong way. One of them, Sandra Whittal, has decided to discover the identity of the mysterious man they are calling “the Finder,” who keeps showing up the police’s incompetence by solving their cases. Whittal is a good cop but a cold personality; she can’t see the good the Finder does for the families. She believes that soon, their mysterious “benefactor” is going to evolve. Tiring of finding bodies, he’s going to start making corpses of his own.

When Martin discovers a grave he hopes will turn out to be Tinsley’s, he’s startled to find a second, very fresh, corpse inside. Now he realizes the serial killer he’s been stalking has also been stalking him, while Whittal believes her prediction has come true.

Whittal’s partner isn’t as certain as she is that their unknown caller is guilty.

“Maybe the guy who’s been calling isn’t the same guy who did this. Why would a guy who’s been so careful covering his tracks when he didn’t actually kill anyone be so brazenly provocative when he actually does kill someone?  The site, the ritual, everything is difference, and that just doesn’t make sense.”

The killer plans to make Martin pay for destroying his “perfect” crimes.

“There had to be punishment if Martin didn’t hold up his end, that extra leverage to put some selfish fear in the man’s eyes. This wasn’t a game he intended to play with digital evidence. It would all be quite real.”

With the lives of Martin’s wife and daughter at stake and the police closing in on the wrong man, Martin makes a desperate play to stop the killer and prove himself innocent of any crime other than wanting justice for the victims.

This is a novel with a most unique premise. Though Martin Reese may be tiptoeing around the borders of illegality by buying stolen case histories, his objective can’t be condemned, and the reader will no doubt be emotionally on his side from the beginning.

Detective Whittal definitely comes across as a cold character. Emotionally divorced from any rapport with the victims’ loved ones, her immediate assertion that the Finder is gearing up for a murder of his own seems both an erroneous and dubious assumption at that stage of the game, since she has no grounds to think so. It seems more luck and a blend of coincidental circumstances than any true detective work that bring her and Martin to the same point at the same time.

Told from Martin’s point of view, Find You in the Dark is a well-written, if sometimes gruesome tale of one man’s determination to bring justice to victims who have not necessarily been forgotten, but whose cases are delegated to the “cold case files” with little hope of being solved. It’s a chilling story of a man who could’ve conceivably become a serial killer pitted against one who actually is.