Find Me Gone: A Novel 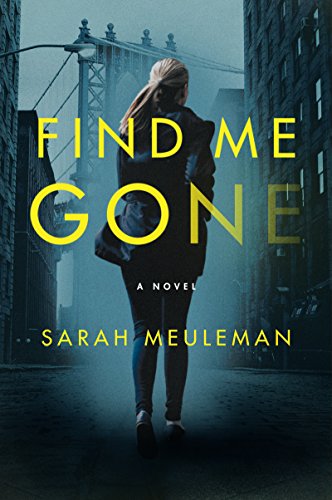 Gone is in the title, set in the typeface familiar from other books, looking like Helvetica went on a diet. Clearly, we’re again in Gone Girl territory in Belgian writer Sarah Meuleman’s debut psychological thriller. The story uses the classic structure of chapters on a crime that happened in the past alternating with chapters in the now—in this case, 2014–2015.

The book opens as narrator Hannah, living in New York in 2014, quits her glamorous job at a glamorous fashion mag meeting glamorous people. (Meuleman worked for Vogue.) Hannah plans to write a book about Agatha Christie, Barbara Follett, and Virginia Wolf, famous writers who disappeared anywhere from 11 days (Christie) to forever (Woolf, a suicide; Follett, never located). Yes, we’re most definitely doing gone girls in this book, with a metaphor that’s as on the nose as a boxer’s glove.

The chapters in the past are set in 1996 in the small Belgian town where Hannah and best friend Sophie are starting their first year of high school. The news is full of reports of the disappearance of several schoolgirls. Hannah and Sophie pay some attention to those events, but it’s all part of the heady mix of two girls growing up—friendship, new experiences, pain—and trauma.

The Belgian chapters read like a good YA book, with some of the same themes as in today’s novels for older teens. The reader is propelled along by the knowledge Sophie is going to disappear (as revealed on the back cover). She’s got problems even before that happens. Her mom’s checked out and her father, a traveling lawnmower salesman, sexually assaults her on home visits from Poland.

Sophie finds solace and safety in pretty, confident Hannah. They explore a sexual relationship that ends as soon as Hannah’s dad walks in on them one night. Hannah drops Sophie and takes up with the most desirable boy in school. Sophie is heartbroken, but her scenes trying to reconnect with Hannah are too repetitive—same dialogue and same emotions—and feel like stalling. On the other hand, one of the sweetest scenes in the 1996 sequence is when Sophie is alone with Damiaan, Hannah’s boyfriend, who turns out to be not so much a villain. After this, the 1996 story drifts as the reader waits for the details of Sophie’s vanishing.

Back in the present, Hannah is doing everything possible to avoid her past. She is neither hunter, nor the hunted. No one is pushing her. There is no threat except the existential one posed by Hannah’s book project. She begins to unwind, surprised that writing a book about missing women churns up memories of the disappearance in 1996.

Deep into this thriller, we get this revelation: “For the first time, she feels the painful certainty: Her writers are not doing what she wishes them to do. They are not helping at all. They are sabotaging her, dragging her back to places she needs to forget. All the way back to Bachte and she doesn’t want to go back to Bachte. Can you learn how to forget?”

No shock Sherlock. Hannah already lacked agency. Now the book project makes her look stupid. You can’t forget if you write about the very thing you’re trying to escape. Hubris is a tragic flaw, stupidity not so much.

If writing about authors who went missing undermines Hannah’s character, the excerpts of her book included here as a separate strand of chapters—which she repeatedly says she’s making little headway on—are dull, slowing what propulsive thrust the book gets from the fear Sophie is going to get gone and we may not find out why.

The girl-gone-girl-on-a-train sub-genre requires one final element: the unreliable narrator. There’s one in this book but more can’t be said specifically without a spoiler. Unreliable narrators are nothing more than a collection of red herrings packaged into one voice. They serve the same purpose: get the reader to believe in the wrong suspects or events. Readers who love this subgenre will likely believe what goes on here and read to the end to find the twist in the tail. They should get more from this novel before they get there than they do.