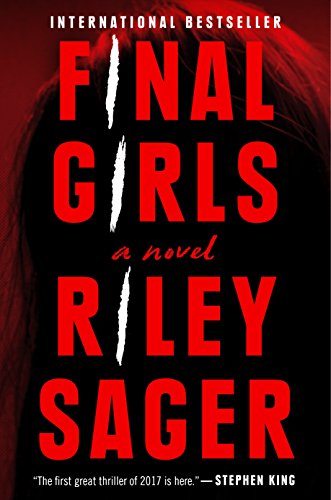 “a tense psychological drama chronicling survivor’s guilt as well as one woman’s struggle to maintain normalcy after experiencing a traumatic event.  . . .”

Any slasher movie enthusiast is aware of the “final girl,” that hardy individual surviving when all others have succumbed. What is never taken into consideration is what happens to her after the credits finish rolling.

Quincy Carpenter is a Final Girl, one of three she’s aware of. The other two are Lisa Milner, survivor of a sorority house massacre, and Samantha Boyd, who killed her attacker after he’d murdered several residents of the Nightlight Inn.

All three survived, but only Quincy now has even a semblance of a normal life.

“‘You can’t change what happened,’ Lisa had told her. ‘All you can control is how you deal with it.’”

Quincy has dealt with it, or so she thinks. Better than the others, anyway.

Lisa is a recluse, Samantha has dropped off the grid, but Quincy . . . She has a home, a fiancé—a young public defender named Jeff—and an online blog with a vast following.  She also has a strong shoulder to cry on when needed, in the form of Coop, the young cop who rescued her and shot her attacker.

Coop is always there when she needs him, no matter the day or the hour.

Now Lisa is dead, by her own hand, but Quincy isn’t so certain. Why, she reasons, would Lisa use a knife, the very weapon wielded by the slasher, to finish where he failed? When she finds an email from Lisa, written on the day of her death, she wonders if answering it would’ve changed the outcome. A young reporter adds his own doubts, only strengthening hers.

Then Samantha Boyds appears, inveigling her way into Quincy’s life. First, she’s invited to stay a few days, then seems intent on becoming a permanent guest.

Seeing Sam’s effect on Quincy, Jeff quietly protests but accepts when Quincy vouches for her. Coop is more suspicious . . . until she catches him with Sam in what appears to be a compromising position.

Then Quincy learns Sam’s lied to her about where she’s been all these years, with more falsehoods to come. Sam visited Lisa the day she died.  Shortly afterward, Lisa sent Quincy that email. Now she wonders if perhaps Lisa had help in dying—from Sam.

She knows Sam wants something from her. Why else does she continue asking, demanding, Quincy remember that night? Quincy swears from the moment the attack began is a total blank, but Sam insists otherwise. She wants Quincy to remember something, specifically about the killer, but what?

When Sam forces Quincy to return to Pine Cottage, Sam will remember. Everything. She’ll discover what she thinks she knows, and what actually happened, are lies with elements of truth, distorted by a mind not wanting to remember.

This is a thriller with a twist. While there’s usually a skew in a suspense tale, this one gives the reader a double dose, revealing them as a surprise so complete even those readers thinking they can outguess the author will be shocked.

Through alternating chapters, narrating Quincy’s current life and the events leading up to the deaths of her friends and her own escape, the reader is lead chronologically into the shock of that unexpected dénouement.

Quincy’s weaknesses, insecurities, her triumphs and many failures to successfully submerge the memories still existing below the surface are dissected by Quincy herself and through Sam’s insistent and violent intervention. With the exception of Coop, most of the others characters are given minor roles. Even Jeff, understanding and supportive, and generally expected to be portrayed more prominently is shown as incidental when contrasted to Sam, the driving force behind Quincy’s revelation, or even Coop, her mainstay through it all.

If there’s one distraction throughout, it’s the switching from first person present point of view when in the contemporary story to past tense for the flashbacks of the killings. To some, this may be a hindrance in maintaining continuity.

Final Girl is a tense psychological drama chronicling survivor’s guilt as well as one woman’s struggle to maintain normalcy after experiencing a traumatic event. Riley Sager’s novel is a superb thriller and a shocker, as much for the revelation of what actually happened in those blocks of Quincy’s missing memory, as from her acceptance of her role in life.

“I’m his creation, forged from blood and pain and the cold steel of a blade. I’m a Final Girl.”