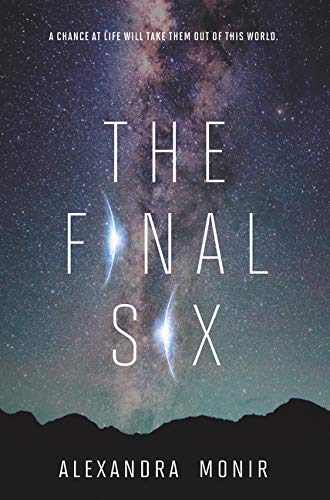 Climate change has wrecked Earth with monster storms and towering tsunamis. Cities around the globe disappear under water that surges higher every day. When the last ice melts, little land will remain for human habitation. Such a scenario is not uncommon in today’s dystopic YA literature.

However, Alexandra Monir gifts us with a unique story offering a solution for the dying world as leaders in American, European, and Russian space agencies draft 24 teens with vital talents for the most audacious undertaking in Earth’s history.

Leo, who lives in the towers that remain above water in Rome, arrives at a news conference atop the Palazzo Senatorio. Officials announce that he is one of the selected 24, and whisk him off to the International Space Training Camp at the well-fortified Houston Space Center. Leo is thrilled because he’s lost everyone he ever loved and never expected to care about anything or anyone again.

Meantime, at a high school in Burbank, an army officer tells Naomi that she’s about to become one of the 24 most famous teenagers on Earth. The thought of leaving her beloved family devastates her, but the finalist teens are not allowed to refuse. Their job is to save the human race.

Officials collect 22 other teens from around the world. After a month of training, the 24 will be cut to 12, and then to the final six—those talented enough and lucky enough (or unlucky enough) to be chosen for the Europa Project.

The first group of astronauts sent to Mars a few years back all mysteriously died. This group will establish a human colony under the ice-covered seas of Europa, one of Jupiter’s larger moons. The water contains a great deal of oxygen, and the sea floor is fertile, ripe for cultivation.

While the reader gets to meet many of the 24, Monir wisely tells the tale from two alternating first-person points of view, those of Leo and Naomi. Tension ratchets up as the 24 compete with one another for one of the final six places.

The plan is for the space craft to swing by Mars to collect the supplies left by the failed mission, and then to slingshot around Mars, using its gravitational field to speed toward Europa. Leo, a world-class swimmer and diver, hopes to become the mission’s underwater expert. Naomi’s brilliant mind easily comprehends physics, numbers, and computers.

Naomi initially hopes to fail so she can return to her family; then she unlocks some of the secrets of the planned mission by hacking into a cyborg meant to accompany the final six to Europa. She learns that the same unmanned craft that discovered the sea under Europa’s ice also detected signs of life. This reinforces her suspicions that project leaders are lying to the teens and perhaps to the world. She comes to believe she can better serve her family and the world by being part of the final six.

The astronauts in training receive a daily injection of radiation resistant bacteria (RRB) to protect them from the harsh radiation of outer space. Two teens die from the injections, one of them Naomi’s roommate, who cries out, “It’s alive,” just before her death. Naomi swipes some of the RRB and examines it under the portable electron microscope she travels with.

Unlike all bacterial species on Earth which do not have a true nucleus, the RRB bacteria have three. They are indeed alive and are a seemingly impossible form of life. If they are not from Earth are they from Europa?

When the final six young astronauts are chosen, something doesn’t seem quite right. Yet at the same time, the selection seems inevitable. The huge revelation on the last two pages also seems inevitable, and yet as right as it is surprising.

A pure science-fiction story untinged by fantasy is an uncommon thing in YA literature. A good story, relatable characters, a brief romance, and unexpected twists—what else can one ask of a book? The only negative? Having to wait a year or so until the sequel comes out!