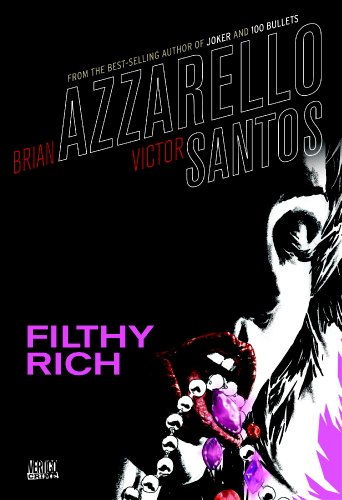 Filthy Rich is the first graphic novel to come from the newly launched Vertigo Crime imprint at DC Comics. It follows the classic American noir formula: a tough guy, down on his luck, meets his femme fatale and much murder and mayhem ensues.

On a first impression basis, the production value of this graphic novel is top class. Presented in a beautiful hardback edition with powerful cover art and black and white interior art, it was already off to a running start. It looks to be the standard format for the series, and this reviewer looks forward to filling a shelf on his bookcase with these lovely tomes. How’d the inside fare, though? Azzarello’s writing style is a perfect match for the story’s tone. Terse and fast-paced, it put me in mind of Ken Bruen’s work. I could imagine Azzarello rattling out his words while he battled a hangover in a dark room that smelled of coffee and stale cigarette smoke. Now, for all I know, Mister Azzarello is a fine example of clean living, but the voice seemed to belong to a writer entrenched in vice. Although it takes a little while to build up to the real nitty-gritty in terms of violence, there’s always the threat of it present in the protagonist’s bearing. And as protagonists go, Rich “Junk” Junkin is up there with the best of anti-heroes. His motivations? Sex and money, probably in that order. And when you learn a little about the women pulling his strings in this story, you might find you can empathize with him. The artwork also suited the mood. Stark black and white that assaulted the eye from each panel. There was a scruffy, dreamlike quality to a lot of the pages, and Santos is great at portraying the ugliness and frenzy of violence in his illustrations. One small criticism is that the lack of softer shading wasn’t always easy on the eyes, and the smaller page format might contribute to this discomfort. But all in all, the match between writer and artist was one made in heaven. Crime fiction fans should keep a close watch on the Vertigo Crime series. The next graphic novel on my reading list is Dark Entries by Ian Rankin and Werther Dell’Edera, and on an initial sneak-peak, the quality is as high as that of the debut offering. And with heavy-hitter Jason Starr up next with The Chill (art by Mick Bertilorenzi) there ought not to be a dip in grit and fire. Filthy Rich is a prime example of how noir should be done. It’ll slap the smirk off your face and leave you guiltily grateful for the tough love dealt. You want unapologetic and bleak? You’ve found it.