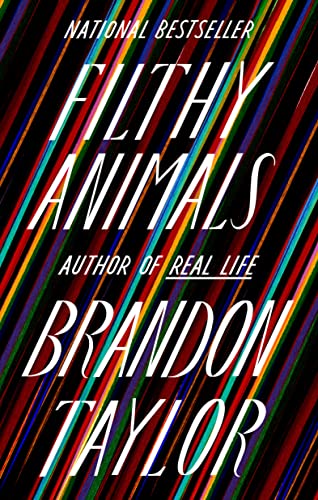 “Filthy Animals is a bravura performance, an emphatic statement of literary power from a writer whose first novel was Booker shortlisted.”

Readers who don’t care for short story collections generally cite the same perceived lack of the genre: as soon as the plot and characters suck you in, it’s over. Even with longer stories, there’s no expansive canvas as in the novel, less space for interweaving intricate plot lines, involved twists and turns, deep dives into characterization. It can be an unsatisfying experience, leaving the reader wanting. Short stories end too soon.

There is a compromise: the series of inter-connected short stories. Not quite a novel, in the right hands this form can satisfy the craving for extended storylines. Brandon Taylor’s Filthy Animals, not a pure example of perfectly connected stories, nevertheless manages to deliver both a strong running theme and a deep exploration of three recurring main characters: Lionel, Charles, and Sophie.

This is a book about loneliness and isolation, the frustration of being misunderstood, feeling different and somehow “less than” the confident people who appear to be winning at life. Sex is the animalistic element from the title, “filthy” the perception relationships other than monogamous heterosexuality carry a burden of shame.

The book begins, ends, and is shot through with three characters in a shared sexual relationship: Lionel, a mathematics academic recently released from a mental hospital following a suicide attempt; Charles, a magnificently chiseled though second-tier ballet dancer; and Sophie, another ballet dancer in an open relationship with Charles, who encourages her partner’s sexual relationship with Lionel. Charles dominates Lionel, something that at once intimidates and excites, threatening to devour him. Around both orbits Sophie, a less-developed character alternately watching from the sidelines and nudging the two men closer together, her function less participant than architect of their desire.

Between installments, Taylor pursues these same themes of alienation and sexuality as a driving force through stories of characters unrelated to the trio. The result is a fully realized exploration of what it means to need and desire another person, his characters precariously balanced on the knife-edge between exhilaration and self-destruction.

Filthy Animals is a bravura performance, an emphatic statement of literary power from a writer whose first novel was Booker shortlisted.