Figures in a Landscape: People and Places 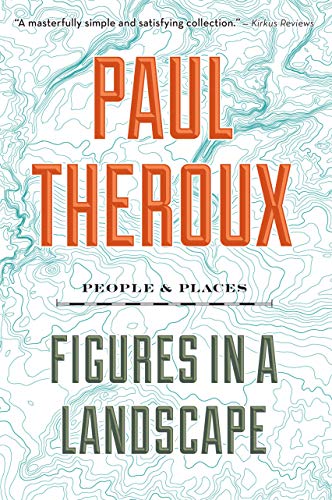 To take us lands away."

Theroux’s travel writing takes readers on adventurous journeys often marked by discomfort, uncertainty, and danger. “I travel in old clothes, on a small budget, on a bus or train or cattle truck,” Theroux tells us. His wanderlust drives him to seek out extremes of experience that most of us avoid. So perhaps it is no surprise that the people Theroux selects to profile live on frontiers of experience that few of us dare approach.

The essays in Figures in a Landscape can be loosely grouped into three categories. Most extensive are his profiles of fellow writers, the majority of whom are Europeans and all of whom write from the margins of society. Theroux has a strong affinity for the Englishman Graham Greene, a fellow travel writer and novelist drawn to the seedy side of life. Greene mentored the youthful Theroux, and Theroux returned the favor by writing introductions to editions of Greene’s work. Theroux titles his essay on Greene “Greeneland,” suggesting both a place and a person.

Greene is best known for bitter novels like Our Man in Havana and The Comedians set in corrupt countries like Cuba and Haiti that have suffered from American interference. Greene places in these settings morally compromised characters who pursue degraded ambitions that lead them to sordid fates sardonically delivered. Greene was a lonely and private man who worked out the contradictions of his own character in his novels, and Theroux is drawn to that feature of his art, as his summary of Greene indicates: “Greene was a restless traveler, a committed writer, a terrible husband, an appalling father, and an admitted manic-depressive. He was relentlessly sexual, ardently priapic . . . Compulsive sexuality seemed to shape the pattern of his life, his travels, his fictional subjects, and his faith.”

Another writer with whom Theroux feels a kinship is the American expatriate Paul Bowles. Originally from New York City, Bowles had been living in Tangier since 1947, when he moved there at the urging of another American expatriate, the surrealist writer and art collector Gertrude Stein. In 1949, Bowles published The Sheltering Sky, the novel for which he is famous, and soon began to attract other disaffected American writers¾Jack Kerouac, Allen Ginsberg, and William Burroughs, among others¾who made pilgrimages to Morocco to meet him. Theroux followed in their footsteps.

Though not a carrier of existential despair¾a wary optimism pervades his nonfiction books¾Theroux considers himself a fellow traveler with Bowles. Like him, Theroux is “possessed by the notion of extremes.” He confides, “As a traveler, as a writer, I have learned from Bowles’s habit of observation, his love of extreme situations, his curiosity about cultures, his love of solitude, and most of all his patience.”

Theroux covers several other writers in Figures in a Landscape¾Joseph Conrad, Henry David Thoreau, Hunter Thompson¾all of them outsiders whose detachment made them keen observers of human nature and human society. It’s no surprise that he admires Joseph Conrad, a mariner who sailed the oceans before coming ashore in England, taking a new name, and writing novels about men struggling against the forces of nature and the forces of their own natures.

In the second category are profiles of American notables¾people made famous by their unusual achievements and lifestyles. Theroux pairs them: Elizabeth Taylor with Michael Jackson, and Robin Williams with Oliver Sacks.

A surprising friendship that many people outside Hollywood may not be aware of is the Peter Pan and Wendy fantasy played out by movie star Elizabeth Taylor and pop musician Michael Jackson. It’s just the sort of oddity that attracts Theroux.

Jackson and Taylor were both child stars supporting families who exploited them. Jackson came off the worst, suffering sexual abuse by his father that permanently warped him. But Taylor was a victim, too, and lived out her sense of unworthiness in a series of unhappy marriages (eight), and more than two score love affairs, including one with a used car salesman found guilty of fiddling with the odometers of the cars he sold.

Theroux sympathizes with Taylor the troubled child who finds happiness in the company of Michael Jackson in their Peter Pan world. “Peter and Wendy has shown that it has legs,” he writes. “This friendship has lasted longer than any of Elizabeth’s actual marriages. Elizabeth had an appetite for life, and appetite was the word that kept occurring to me when I thought of her: it was a zest, and a hunger, that somehow was never satisfied.” The same might be said about Theroux’s need to travel.

It’s easy to link Robin Williams and Oliver Sacks, each a celebrity in his own field, each associated with extremes of human behavior, and each, in his own way, a healer. Theroux devotes separate chapters to each of them, but their names are often cross-referenced. Williams portrayed Sacks in the film Awakenings, and Sacks considered Williams almost Tourettic, like some of his patients. Theroux notes that Williams has a “resemblance to a self-enlightened patient in an Oliver Sacks case history.”

Travel stories comprise the third category. The book opens with Theroux on a drug quest, a choice hinting at the thought that for him travel is an addiction. He joins a small group of adventure seekers led by a shaman named Don Pablo, who leads them to a native village deep in the Amazon jungle in eastern Ecuador, where they will ingest ayahuasca, a powerful hallucinogenic plant that reputedly transforms its users into seers and time travelers.

Theroux is ill at ease with his fellow thrill-seekers, who talk too much and observe too little. He quickly regrets going on the trip, leaves the group, and ends up taking ayahuasca in a filthy outpost that provides services¾alcohol, prostitutes, guns¾to the workers of an American company extracting oil from the rainforest. The drug brings on retching and grotesque visions of serpents, spiders, and spaceships.

Why does Theroux travel compulsively, and why does he entertain risks? In the concluding chapters of Figures in a Landscape he provides the keys to understanding his writing compulsion and his wanderlust, needs that he satisfies by writing travel books.

The keys are his youthful reading of adventure stories and his family life, especially the example set by his father, Albert. Theroux lovingly portrays his father as a shy, unassuming man, utterly lacking in ambition, pretension, or ego, who spent his days observing life, not living it. He had few interests, no close friends or drinking buddies, no intellectual curiosity beyond the newspaper. His main form of recreation was beachcombing. But Theroux loved him for his tolerance, his gentleness, his ready acceptance of whatever life brought him. These qualities gave him a profound spiritual dimension, in Theroux’s eyes, although Albert would never have thought of himself as a spiritual person. “He was the least egotistical person I have ever known,” Theroux writes, “with an almost Buddhist sense of vacancy, detachment, and generosity.”

When Theroux was a child, Albert read James Fenimore Cooper novels to him, and this implanted in the boy both a love of reading and a love of adventure. The stories stimulated in him “secret fantasies of life as a backwoodsman, tracker, skier, marksman, scout; my tendency to escapism in reading.” As he grew older, Theroux was drawn to other writers like Henry Miller and D. H. Lawrence who defied convention and penned shocking books that were banned. “The idea of the writer as someone dangerous was greatly appealing to me.”

He was determined not to replicate his father’s life, and instead to take risks and plunge into the unknown. There is a sense in which Theroux has tried to live out for his father the life he could not live himself. He speculates that with different circumstances, his father might have lived more adventurously. “If he’d had the money, he would have made a great traveler in the old style, as a wanderer, not as a scholar. He always encouraged me in my travels, and unlike most people was a patient listener to travelers’ tales.” And yet we learn that Albert never read one of his son’s travel books.

Theroux imagines his father urging him onto the path he has followed. “‘Don’t do what I’ve done, don’t live my life, don’t make the mistakes I’ve made.’ He cheered me in my going to Africa, in taking months off to hike around Britain’s coast, in paddling my kayak . . . ‘Go your own way,’ he’d say. ‘You can travel faster and farther alone.’”