Fighting Patton: George S. Patton Jr. Through the Eyes of His Enemies 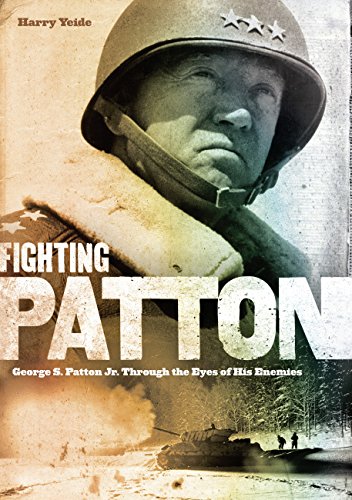 “. . . the publication of Fighting Patton is especially significant, because of the depth and breadth of the German material utilized by Mr. Yeide. Suffice it to say that there are many professional historians writing in the same general field of investigation who would profit from learning and utilizing Harry Yeide’s research methods. . . . The result is that the reader gains a comprehensive insight into the personalities and battlefield experiences of Patton’s principal enemies.”

Readers who hunger for the down-to-earth, rough textured, unflinching style of military history so often lacking in the works of academic historians found a tireless champion when Harry Yeide published his first book in 2003; Steel Victory told the story of the vital role that the United States Army’s independent tank battalions had in defeating the Wehrmacht and Waffen SS in northwest Europe during 1944–1945.

There can be no doubt as to the bona fides of Harry Yeide as a patriotic chronicler of the American GI and his combat exploits in the Second World War. On the heels of Steel Victory, Mr. Yeide researched and wrote assiduously, generating a series of works covering similar topics. They include The Tank Killers (2005), The Longest Battle (2005), Weapons of the Tankers (2006) and (with co-author Marc Stout), and First to the Rhine (2007). All of these books reflect Yeide’s laudable desire to preserve for posterity the successes of American soldiers accomplished “under horrible conditions.”

In his most recent work, Fighting Patton: George S. Patton, Jr. Through the Eyes of His Enemies, Harry Yeide takes a broader approach, moving away from the day to day filth and fear that consumes the combat soldier to consider the maturation of George Smith Patton, Jr. as a soldier and military leader. He highlights Patton’s innate aggressiveness and physical bravery—qualities that served him well in both World Wars—by describing his early career as a young cavalry officer serving under John J. Pershing during the latter’s expedition to eradicate the predations of Francisco “Pancho” Villa.

Mr. Yeide makes a point of bringing to the fore the innovative side of Patton’s nature, namely his flexibility of mind in embracing the concept of mechanization that germinated in the Great War and grew steadily during the interwar period. This was a considerable achievement on the part of Patton, coming as he did from an arm of the service generally perceived—rightly or wrongly—as the one most implacably opposed to surrendering its horses in favor of horsepower.

With regard to Patton’s service in the Second World War, author Yeide is at pains to point out that the General, as a corps and army commander, often had to contend with not only the enemy, but also his own army’s array of inept superiors and unreliable subordinates. Mr. Yeide’s respect for his subject is reflected in his marked refusal to be drawn into the endless controversies surrounding Patton’s intolerance of “cowards” and regrettable penchant for inciting his troops to “take no prisoners.”

While Patton is certainly the central character in the book, its real focus is on the perspective of the German general officers who fought Patton in Sicily, North Africa, and on the European continent during 1944–1945. Mr. Yeide’s method in writing Fighting Patton is to let the original documentary evidence, both American and German, tell the story.

On the American side, Mr. Yeide’s original sources include such documents as after action reports, intelligence summaries and assessments, unit orders, and operations reports. In order to capture the realities of combat from the German side, the author uses comparable German documents, as well as a number of narratives and analytical reports written by former German officers in the immediate postwar era.

For students of the German armed forces, the publication of Fighting Patton is especially significant, because of the depth and breadth of the German material utilized by Mr. Yeide. Suffice it to say that there are many professional historians writing in the same general field of investigation who would profit from learning and utilizing Harry Yeide’s research methods.

The particular German documents that make Fighting Patton such a useful and interesting book are the personnel files of the general officers who are “actors” in Mr. Yeide’s story, the fitness reports that they wrote regarding their subordinates (including the officers commanding the German armies, corps and divisions that fought Patton’s troops), and their communications between each other during the battles leading up to Germany’s defeat.

The result is that the reader gains a comprehensive insight into the personalities and battlefield experiences of Patton’s principal enemies.

More importantly, for Harry Yeide’s purposes, the German documents show what the enemy thought of George Patton. Those documents, in the manner of Sherlock Holmes’ dog that did not bark, enabled Mr. Yeide to explode the myth that Patton’s aggressiveness, élan and leadership qualities so concerned the German commanders that their own defensive plans and operations were compromised. What did the German generals say about George Patton? They failed to mention his name.

There will be readers of Fighting Patton who will be dismayed by its author’s frank and iconoclastic presentation of the book’s central character. To the extent that Mr. Yeide requires defending before such readers, it should be recognized that he was led to confront the myths about Patton by the sources, and not by his own prejudices.

Why is it significant that George Patton’s counterparts on the German side not only failed to keep track of his movements and intentions, but in some cases also were completely unaware of his presence on the European mainland until well after his arrival there? The answer is that almost to a man, the German general officers appointed (and often dismissed) by the Fuehrer to defend the Reich against its western enemies were skilled practitioners of the art of mobile warfare.

Most had successfully commanded armored and mechanized infantry forces during German offensive operations in Poland, France, Russia, and North Africa, and virtually all came to the west after many months of vicious defensive fighting against overwhelmingly superior forces commanded by equally gifted and experienced Soviet commanders like Georgi Zhukov, Konstantin Rokossovsky, and others. In the west they confronted the same huge disparity between the quality and quantity of the forces available to the Allies and Axis respectively, with the added factor that their ground troops were virtually defenseless against the powerful air forces of the Allies.

But while the wartime records of German commanders fail to support the claim that General Patton struck fear into the hearts of his enemies and forced them to account for his every move, it is nevertheless also true, as Mr. Yeide demonstrates in the conclusion to his work, that when peace came and the German commanders had the time and necessary information to consider Patton’s work, these men testified to the competence of their former foe. This recognition, as Mr. Yeide puts it, “is enough” to place Patton in the company of great armored generals.