Fighters in the Shadows: A New History of the French Resistance 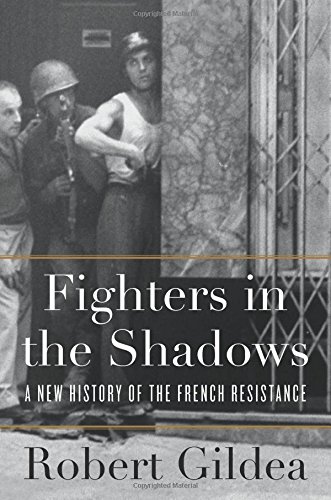 “brings to light a truth that should be told of how ordinary men and women struggled for four years to help liberate their country . . .”

There is an old saying that as history becomes legend and legend becomes myth, the original truth becomes shrouded and even lost. This is certainly true for the history of the French resistance to the German occupation from 1940–1944.

To overcome the trauma and ignominy of the collapse of the French Army in the short campaign of 1940, French politicians, generals, and other elites almost immediately began to craft a tale of brave resistance by the French people to German occupation, beginning with the Free French government-in-exile of Charles De Gaulle.

The legends and eventual myths of brave French men and women offering passive and active resistance to their Nazi enemies has only grown in the 70 years since the end of the war. Robert Gildea has authored a seminal work on this long neglected topic from World War II, which lays to rest many of these myths while enhancing the actual story of the resistance offered by many French citizens to their Nazi yoke.

Using a wide range of previously untapped primary and secondary sources, including numerous overlooked memoirs and interviews, Gildea provides a wide-ranging look at the good, the bad, and the ugly ways the French population reacted to defeat and occupation.

First the good. Gildea provides a kaleidoscope of perspectives on the personalities and actions of the resistance, including many neglected viewpoints such as the contributions of women and communists mostly overlooked in traditional French resistance histories. These active resisters faced the threat of constant exposure to the highly efficient German Gestapo and subsequent death or torture, yet they bravely carried on with espionage, aiding escaping allied airmen shot down over the Continent, and finally active resistance and sabotage once the Allies landed on D-Day.

The ultimate victory for the French resistance finally came with the uprising and street fighting that helped liberate Paris in July 1944, an effort that helped prevent the destruction of the city planned as a punitive action by Hitler.

Next, the bad, which Gildea provides in some context to the national trauma France experienced. While many French chose to resist the Germans, the puppet Vichy government of Marshal Petain established by the Nazi armistice had many more supporters than post-war French elite wanted to admit. The far-right elements of the military, government, and clergy, while still in shock at France's sudden defeat, had no love lost for the Third Republic.

The Vichy government had a stronger fascist taint that many French wanted to acknowledge and many more French citizens were either ambivalent or hostile to the call for resistance made by Charles de Gaulle, a relatively junior and unknown general in 1940. Although many Vichy officials turned a blind eye to resistance personnel hiding in Vichy-controlled France, most were hostile to the so-called Free French, and even fought their countrymen in a quasi-civil war in the Vichy controlled territories of Syria and Lebanon.

Gildea leaves no doubt that for many French, collaboration with the Germans was a conscious choice and collective shame that was minimized to a great extent after 1945 by de Gaulle and his supporters. The fairly quick amnesty laws on collaboration passed in the 1950s allowed the official resistance narrative and collective amnesia about the Vichy government to quickly take root as the French rebuilt their place in post-war Europe.

Finally, the ugly, which Gildea tackles head on. One of the more disgraceful and quickly forgotten sins of the Vichy government was their acquiescence and occasional participation in the deportation of French Jews, first to forced labor camps and eventually to the death camps. Gildea handles this painful French memory by contrasting the latent anti-Semitism of many Vichy officials with the bravery of many French resistance members, including Catholic and Protestant clergy in rescuing French Jews, especially the children.

By sifting through the myth and sorting through participant recollections, Gildea has actually enhanced the bravery and fortitude of those souls that resisted Nazi tyranny. This volume fills a significant gap in the story of World War II in Europe and brings to light a truth that should be told of how ordinary men and women struggled for four years to help liberate their country and help defeat Nazi Germany.