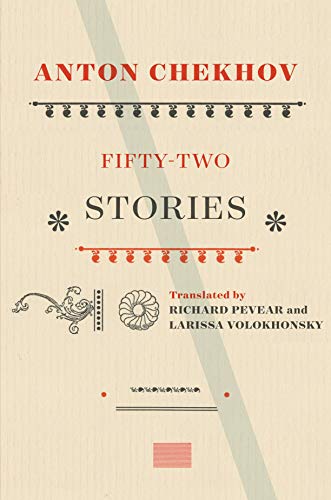 Among the masterful short story writers of the 18th century in Russia—Turgenev, Pushkin, Gogol, Dostoyevsky, Tolstoy—it is Anton Chekhov whose words are most known outside of the motherland because of his four masterpieces of the theater, Three Sisters, Uncle Vanya, The Seagull, and The Cherry Orchard. He was a pioneer of naturalism and psychological truth who coincided with the modernist aesthetic in the theater as developed by Stanislavski.

Chekhov’s own life as a short story writer is a fascinating drama unto itself. To pay tuition to finish medical school Chekhov was writing short stories that were published under pseudonyms in Russian newspapers. They were often slices of Russian life, humorous scenarios about the absurdities of marriage, friendship, relatives, mores—many times posing moralistic questions.

The stream running through all of these stories is Chekhov’s ability to paint dimensional character studies, in all of their simplicity or complexity, drawing from every segment of the society including the aristocracy, the civil-service class, their domestics, the laborers, and the starving peasants.

In reading the new masterful translations by Richard Pevear and Larissa Volokhonsky nothing seems lost or Anglicized for effect. Reading these stories, a century later one thinks how prescient Chekhov was: arch, provocative, sardonic, cryptic, and a master of the short-story form.

Here are a few capsules.

In “A Commotion,” a rich woman is ransacking the bedroom of a Mashenka, a governess in her employ, in search of a missing brooch. The governess is humiliated that she would be subjected to such treatment, but a servant girl tells her that no one has been above suspicion. At dinner, the mistress rails against the staff, and the governess leaves the table in tears and decides to leave her job immediately. The husband comes to her room and pleads with her not to go, and further admits that he took the brooch to pay off his debts (perhaps from gambling or whoring). The governess is not swayed and leaves. This drama about the ruling class is Chekhov at his best, a biting domestic drama that explores the hypocrisies of the privileged class.

In “A Nightmare,” a young landowner is asked to contribute to a parish in his jurisdiction to start a school for peasant children. When he meets the deacon Yakov Smirnoff, he is horrified by his appearance, manners, and his inability to concentrate. He visits the parish and is even more outraged and seeks to get the pastor dismissed. When the clergyman confesses that he is ashamed at the level of his poverty, the landowner has a reality check. But does it move him to act? In another scabrous fable aimed at the ruling class, Chekhov doesn’t resort to narrative devices to satisfy readers, his stories and characters are not so neatly wrapped up.

“Boys” is the wayward tale of Vodolya coming home for Christmas with a school friend Lentilkin in tow. As his parents and sisters are thrilled that he is home to celebrate the holiday, but the boys are asocial as they secretly plot to flee the homecoming. They in fact are planning to somehow escape their old lives and stow away to California to become gold bandits. Secrets are spilled, the family finds out, the hapless boys are rounded up in the next town, humiliated and having to face reality.

“Neighbors” is about Pyotr, a man in his late 20s. He and his mother are distraught over his younger sister running off with a married man. He decides to take action against him and gallops to his estate to confront him. They are old friends, but he immediately shrinks from confronting him, and when he sees his sister, his opinion of his old friend careens from revulsion and trashing his motive and character to accepting that their love is something that he knows nothing about. Being witness to it, in fact, challenges his entire world view.

In “A Breakdown,” a law student, Vassilyev, is coaxed away from his studies by fraternity brother to get drunk, and brothel hop in the red-light district. But Vassilyev is fascinated and horrified at what he assesses as a sex-slave class of women who can be purchased and exploited the ruling class. After a full night of debauchery, he resolves to try to save however many he can. But his horror at the ugly world and own obsessive behavior makes him spiral out of control.

“Anguish” is a slice of life drama about a sleigh cabby working during a blizzard and hoping to get fares around a Russian town. Iona Potopav and his horse are covered in snow, waiting for fares all evening. Finally, a brutish man hops in and shouts orders about his destination, wondering why it is taking so long to get going. Potopav apologizes and tells him he’s distracted because his son died just days before. The man couldn’t be more unsympathetic. Then three drunken, brutish students also berate the cabby for taking too long. He tells them, too, and of course, they are not sympathetic at all. He repairs to the stables and pours his heart out to the horse.

Chekhov’s miniature prose dramas and comedies present a gallery of unforgettable characters. Many are stylistically Russian fables with scabrous morals about the follies and failures of humans. His often-cryptic endings to his stories or plot red herrings that were an excuse to get to some humanistic and universal truths leave readers to scratch their heads, but still trying to figure out the literary puzzle.

Translators Pevear and Volokhonsky provide a dictionary of archaic Russian words, references, and phrases in the endnotes section of the book.