The Fifth Servant: A Novel 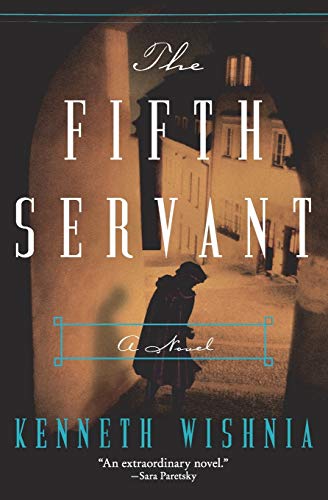 Reading Kenneth Wishnia’s new novel The Fifth Servant has been the most fun this reviewer’s had reading any book since Junot Diaz’s The Brief Wondrous Life of Oscar Wao two years ago. Although very different books, both novels have outsider protagonists whose social status is not nearly commensurate with their prodigious intellects (book lovers will recall Oscar Wao as a young, nerdy, first-generation Dominican-American and the oldest non-clergy male virgin in his in late twentieth-century Paterson, New Jersey, neighborhood).

Benjamin Ben-Akiva, a late bloomer like his father’s namesake, is a middle-aged, sixteenth-century Polish rabbinic scholar who left his job as assistant rabbi in Slonim, a shtetl in rural northeast Poland, to follow his estranged, urbane, status-conscious wife, Reyzl, back to her hometown of Prague to try to regain her affection.

Once there, the only job he can get is as an assistant shammes (sexton, caretaker, or servant) at one the city’s four synagogues (making him the fifth shammes, thus the book’s title). Like Wao, Ben-Akiva is a polyglot with a masterful command of multiple cultures (both high- and low-brow). Like Diaz, Wishnia seasons his narrative with witty, erudite quotes that text-loving culture vultures such as this reviewer can never get enough of. But you don’t have to be an ABD (all but dissertation) with two masters degrees to enjoy this engaging page-turner; Wishnia provides a glossary of foreign terms at the back of the book and explains most references in context.

The Fifth Servant relates the events of the 1592 blood libel accusation that threatened Prague’s Jewish community with annihilation. Although he is newly arrived in town, it falls on Ben-Akiva to discover the real murderers of the gentile girl whose body was found on the premises of a Jewish pharmaceutical merchant on the morning of Passover Eve. Thus the shammes must also be a shamus (detective). The sheriff of Prague gives Ben-Akiva three days to solve the case or else all the city’s Jews will pay with their lives. The action of the novel unfolds over those three days (imagine a feature length movie version of the TV show “24” entitled “72” and you’ll get a sense of the book’s brisk pacing). Ben-Akiva’s original romantic mission lends the drama additional poignancy.

To help him solve the case our hero enlists the participation and assistance of Rabbi Judah Loew (a.k.a. the Maharal), a great scholar as well as a loved and respected community leader; his assistant Rabbi David Gans (a former classmate of Ben-Akiva’s when they both were protégés of Rabbi Moses Isserles of Krakow who, like Rabbi Loew, encouraged his students to acquire a broad education that included secular subjects); Mordecai Meisel, the richest man in the ghetto; and Meisel’s servant girl, Anya, an open-minded and intellectually curious daughter of pork butchers, who is in love with yet another Jewish scholar Yankev ben Khayim. Wishnia’s portrait of Anya , following the example of writers like Isaac Bashevis Singer, is a respectful tribute to Ashkenazi Jewry’s Jewish-by-choice foremothers.

While tracking down leads in this murder case, Ben-Akiva encounters a wide cast of characters, Christian and Jewish, representing all stations in the social order from Emperor Rudolph II to the ghetto rat catcher, and a variety of venues from the Emperor’s palace to the ghetto’s brothel. The book includes a street map of Prague to enable the reader to follow the action. It would be helpful if future editions of The Fifth Servant were to also include a list of characters.

Wishnia deftly deploys his vast research to transport us to a very different time and place. Because they studied secular as well as rabbinic subjects, Ben-Akiva and Gans are labeled freethinkers, but when he gets out of bed every morning Ben-Akiva immediately washes his face and hands to drive away night demons. Both Jewish and Christian characters espouse superstitions matter-of-factly; in the mouths of the latter it is often mixed with bigotry.

There is a very moving scene in which Rabbi Loew leads a Passover seder while gentile officials trash his house as they take an inventory of all his possessions (as they did in every Jewish home in Prague) which will then be confiscated should Ben-Akiva fail to find the real culprit. Other frightening expressions of Christian antiSemitism are shocking to twenty-first century readers, but Ben-Akiva often has a witty retort. When a Christian peasant bringing a sheep to market asks Ben-Akiva: “Tell me, Jews, if you are so smart, what is my sheep saying?” the latter replies, “Help, I’m being pulled along by an idiot.”

Scholars have pointed out that among observant Jews each generation builds the legalistic fence around the Torah higher than its predecessors, and that in every Jewish community and in every generation there have been more and less observant Jews. Still, to even a mildly ritually observant reader, the casual attitude supposedly observant characters take toward their own lax observance is surprising. In one scene a husband and wife acknowledge that each, for different reasons, is ritually unclean—and then decide to have sex anyway.

Ezra Pound wrote that all history is contemporaneous. All of us are modern in our own time, and so too were our antecedents in theirs. While this reviewer does not have a problem with historical characters using modern idioms, would anyone 300 years before Freud discovered the unconscious have spoken the following paragraph?:

“Surely you carry scars from all that hateful treatment, but the worst scars are not visible on your skin. They are buried deep inside you, so deep you may not even be aware of them yourself. In spite of all your accomplishments, inside you lurks a frightened child who harbors a natural desire to get back at his tormentors, even if that leads you to do things that ultimately make you fail in order to confirm your hidden belief that you don’t deserve to succeed.”

But that anachronism is a minor quibble, and the characters’ psychological complexity only strengthens this richly textured and immensely entertaining book.