The Fifth Petal: A Novel 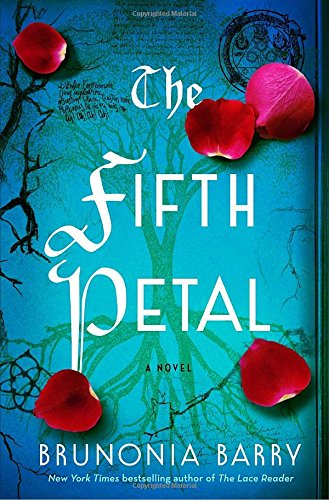 In 1692, 15 accused witches were hanged in Salem, Massachusetts; in 2014, three of their descendants, in a ceremony to bless the place where they died, are also killed in a horrendous way.  The only witnesses are Callie, daughter of one of the victims, and Rose, a well-respected Salem scholar who had befriended the three homeless young women.

Rose is accused, then exonerated of the crime, but becomes a homeless wanderer, continually muttering about trapping the banshee she claims killed the girls. Callie is sent to a Catholic orphanage.

In 2014, Rose is threatened by a teenager who dies from the encounter. Rose says she killed him because “Death was the lesser of two evils.” Unfortunately the boy was the grandson of a Salem Brahmin who pushes not only for Rose’s arrest but also her indictment for murder.

Callie is now a music therapist, using sounds and harmonies to heal and alleviate her patients’ pain and traumas. She’s also a sensitive and psychic, experiencing visions she tries to hide. The Sisters told her Rose was dead. Now seeing the headlines and learning otherwise, she returns to Salem where she’s once again exposed to the scenes and memories of that long-ago night.

Callie also meets the Whitneys, a prominent Salem family, and their son Paul. She’s attracted to Paul but hesitant to respond since he’s currently in an affair with a Salem gray witch 30 years his senior. Soon, however, she lets down her guard and she and Paul fall in love. The opening of her mother’s cold case murder, and the tying of it to Rose’s current dilemma, as well as old hatreds and new jealousies hint in no uncertain terms that the young couple will never have the “Happily Ever After” Paul wants.

History seems to be repeating itself in a frenzy duplicating the frightening hysteria of the original Salem trials, as strangers demand Rose’s punishment. Then Callie has another vision, this one of Paul, lying in a pool of blood. . . .

There’s more than a murder mystery in The Fifth Petal. It’s also a history lesson, as well as a moral one, written by an author who is an inhabitant of Salem, living with its facts and fiction. The facts of the events in 1692 are meticulously compared to those happening in the present, weaving a fictional tale in which it is deftly pointed out that history never sleeps, and the evil men do truly does live after them.

Barry has truly written a story that should give us much thought while it entertains.