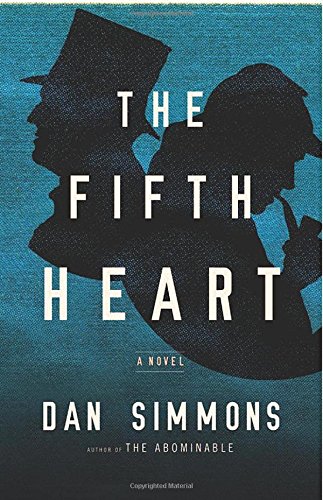 “deserves a contemplative and educated readership appreciative of a story well told.”

If The Fifth Heart by Dan Simmons was dinner it would be a 12-course meal followed by brandy and cigars, not a burger consumed in between texting mundane details of an uninspired life. This is not a book for the fast food crowd.

Rich in detail, with a complex plot that intertwines history with fiction, The Fifth Heart immerses the reader in the political and social customs of The Gilded Age, while challenging with a puzzle to solve: Did Clover Adams commit suicide or was she murdered?

The police, her friends, and most of all her husband, Henry Adams, great-grandson and grandson of two US presidents, are convinced that her lifelong melancholy, acerbated by the recent death of her father, caused her to drink a poisonous solution used to develop photographs.

Clover’s brother, Mr. Edward Hooper, doesn’t believe the verdict of suicide and hires The World’s First Consulting Detective, Sherlock Holmes, to investigate the circumstances of Clover’s death. Hooper’s only evidence is a card embossed with five hearts and a typed message: “She was murdered.”

Such a card has been sent to the surviving four members of The Five Hearts Club each year on the anniversary of Clover’s death. The very small, very exclusive, social group of which Clover was a member seems to automatically limit the number of suspects.

Before he can begin his investigation Holmes is killed along with his arch rival, Professor Moriarty, at Reichenbach Falls, as chronicled by his biographer, Dr. Watson; however, in the words of Samuel Clemens about his own demise, news of Holmes’s death “is greatly exaggerated.”

Henry James, well known American novelist and ex-patriot, learns just how exaggerated when he meets Holmes on the banks of the Seine in 1893. Even though Holmes is disguised as a Norwegian explorer, James recognizes him.  “Once he’d seen a face and learned its name, he never forgot.”

Bedeviled by the poor sales of his books, his approaching 50th birthday, his growing sense of failure, and the recent death of his sister, Alice, James intends to commit suicide by throwing himself into the Seine while clutching a snuff box filled with his sister’s ashes. He is not pleased to be pulled “back to his life” by Sherlock Holmes.

If Holmes has interrupted the novelist’s planned suicide, James unknowingly returns the favor. Holmes also had planned to take his own life.  In revealing his motive, Holmes also reveals the subtext of The Fifth Heart, the philosophical underpinning of author Simmons’s novel.

“I am, the evidence has proven to me most conclusively, a literary construct. Some ink-stained scribbler’s creation. A mere fictional character,” Holmes tells James.

If Holmes is not a real person, but James remembers meeting him at a garden party four years before, does that mean that he, James the well known novelist, is also not real? Or is he dealing with a crazy person? Has something driven Holmes “to and beyond the raveled edge of rationality?”

Without being able to explain to himself why he cannot resist Holmes’s demands, James accompanies the detective to America to investigate Clover’s death, although the writer is certain her death was suicide. Once there, and staying at the home of John Hay and his wife, Clara, James learns that Holmes suspects Irene Adler and her son, Lucan, of being involved in Clover’s murder.

Further revelations shock James almost beyond his capacity to process them. Lucan Adler, the world’s greatest assassin, plans to assassinate President Grover Cleveland at the behest of Professor James Moriarty. But if Sherlock Holmes is a fictional creation, doesn’t that also mean that Irene Adler, her son, and Moriarty are fictional, too? In fact, Holmes has already told James that Moriarty doesn’t exist.

Against the detailed and eloquently described backdrop of the Columbian Exhibition in Chicago, Holmes, with the assistance of the Secret Service and other law enforcement, attempts to thwart Lucan Adler’s plans to assassinate the President. James finds himself unintentionally part of the action.

Simmons introduces a variety of historical figures, each one meticulously fleshed out so they are three dimensional characters, each playing a role, however brief, in the story. Samuel Clemens, Theodore Roosevelt, Henry Cabot Lodge, and William Dean Howells are minor characters who add to the verisimilitude of the novel.

Without an intimate knowledge of Sherlock Holmes and his fictional adventures, and a solid background in the history of the Gilded Age, the appeal of The Fifth Heart is likely to be more limited than other historical mysteries. Fortunately, readers of historical mysteries and novels by definition have a surer grasp of history than the average reader.

Compelling, dense with historical detail, but with a understated humor, writing as eloquent, if not more so than found in most contemporary novels, The Fifth Heart by Dan Simmons deserves a contemplative and educated readership appreciative of a story well told.