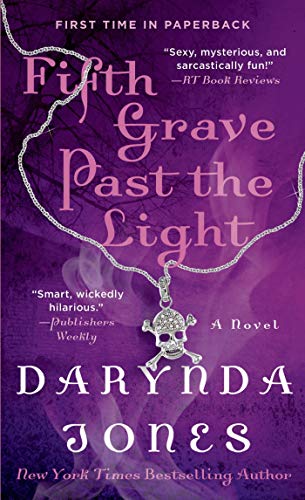 The fifth installment of the Charley Davidson Reaper series is finally here. Following on the heels of the rather lackluster Fourth Grave Beneath My Feet, Fifth Grave picks up the pace, kicking the storyline into high gear.

Recovered from her bout with incessant and uncontrollable whining, Charley has pulled herself together and gotten back to work, which, currently has her at a bar running surveillance on a chubby-chasing cheating husband, while fighting off the amorous advances of a stuttering dead guy.

But Charley could use the distraction now that the smoking hot maleness known as Reyes Farrow is not only living next door, but is the new owner of her father’s bar. While the business has seen an off-the-charts boon due to Reyes’ exquisite façade, Charley’s battered ego is taking another hit.

In addition to having her uncontrollable desire for Reyes to contend with, there’s also the very real possibility that he is the arsonist that Charley and the APD are hunting—given that all the buildings being burned are places he once lived seems too coincidental to be ignored.

While Charley is contemplating her body’s ability for abstinence, her apartment begins to fill up with women. Dead women. About 20 of them—all blondes of all ages and all terrified into abject silence at the hands of one very sick and dangerous man.

Now that serial killer is added to her to-do list, Charley puts in extra effort when, for the first time, her own life isn’t in danger, but instead her sister Gemma’s, whose profile fits perfectly into the killer’s resumè.

Desperate to keep her sister safe, Charley knows that only one man is capable of protecting Gemma, but, as with all things Reyes, nothing comes for free, and in return for this favor he wants his pound of flesh—namely Charley’s.

It’s so wonderful to see that Darynda Jones has returned from her emotional vacation and jumped back into the series in with both feet. Even with her head in the game, there are a lot of strange—and often questionable—twists and turns regarding the plotline and the characters, however things seem to be moving forward and it remains to be seen how these changes will shake out.

While Cookie is fairly MIA from this installment, gorgeous Garrett Swopes has been brought back into the fold—though now he’s even more cynical and bitter after his rather torturous trip into hell courtesy of Reyes’ father, Satan.

Lately, it seems no future installment is complete without a near death, torture scene for Charley. While being bound, doused in gasoline for the flaming finale following a brutal rape sounds exciting, it felt a little over the top. However, this time, Charley manages to hold it together, despite the circumstances.

On a happier note, the usual suspects that regular readers of the series have grown to know and love are front and center this time around, though Jones seems to struggle in finding new ways to keep the mysterious intrigue behind Reyes’ existence on the front burner. Fortunately, she didn’t struggle in the least in finding fresh ideas to heat things up in the bedroom. Harkening back to the first book, Ms. Jones brings back the seductively scorching passion of Reyes and Charley in the most satisfying way—pun intended.

With just enough of the tried and true to keep things honest, Darynda Jones delivers another exciting, titillating, and action-packed adventure that keeps the pages turning and the quest for more burning hotter than ever.