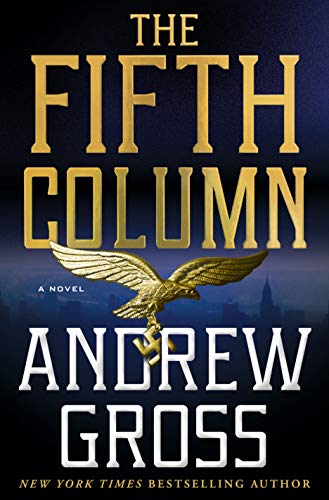 “A thriller recommended for fans of the genre, and also for those who enjoy historical fiction.”

Andrew Gross delivers a World War II historical thriller guaranteed to send shivers down the spine, not the least because it is based on the true story of the Duquense Spy Ring. It is well-written and peopled by characters, some flawed but determined to do what is right, and others masking evil intentions to deliver death in the name of what they believe is right.

Charles Mossman, a historian university lecturer just shy of a Ph.D., has lost his job after a dalliance with a student. He has lost his wife, Liz, for the same reason, and is returning home to New York City after a two-year stint in prison for manslaughter, hoping to reconcile with his wife and see his six-year-old daughter, Emma.

His first shock when arriving at his wife’s apartment, is learning that she now uses her maiden name, and is less than thrilled to see him. His daughter, Emma, however, is excited to see her daddy again.

Liz agrees that Charlie may see Emma two afternoons a week, but he must be gone before Liz returns home from work. Mrs. Shearer, a sour-faced woman, picks up Emma from day camp and stays with her until Liz arrives home.

“She always seemed to do her best not to let Emma and me be alone—I could see in her eyes my daughter’s questionable father who had been sent away for a violent crime . . .”

One day Charlie meets the Swiss couple who live across the hall from Liz and Emma. Trudi and Willi Bauer are an older couple who love Emma as they would their own granddaughters. They teach Emma German and always play classical music and tell her stories.

Charlie visits Emma one day and hears her repeat a word he determines is “lebenstraum,” which she heard the Bauers say is the future.

It is a word Charlie has recently heard. “Lebensraum. Living space. Uttered by Adolf Hitler. It had sent a half million Germans screaming with joy.”

Why would the Bauers know that word and call it the future? The Bauers are Swiss or so they claim. They have a slight German accent, but many Swiss do, since German is one of the languages of Switzerland. And they claim to hate Hitler and the Nazis.

But do they? And who are the men who occasionally visit the apartment, the ones whom Trudi Bauer calls “customers”? Customers for what? What are the Bauers selling?

They are not selling beer because they closed their brewery more than a year ago.

When Charlie and Emma visit Trudi on day, he finds torn and partially burned strips of paper in the trash. One strip is still legible with groups of three numbers written on it—like some kind of code. Trudi is agitated when she finds him looking in the trash.

“On the wall behind the table was a red-and-white flag with the Nazi swastika on it . . . The Bauers were Nazis. I saw it now with my own eyes.”

One day when Charlie comes to visit Emma, he finds the door to the Bauers’ apartment ajar. He sneaks in looking for something, anything, that will prove the Bauers are German spies—or not.

He finds a radio transmitter, a German copy of Darwin’s Voyage of the Beagle with random page numbers and words circled in pen, and a gun. Now he has proof that the Bauers are spies.

No one believes him: not Liz, not his lawyer, and not the police who take his statement and file it away, assuring him they send it to the right people.

Then he accidently meets a French refuge named Noelle whose parents are political prisoners of the Nazis. Because she is French and hates the Nazis, Charlie finds himself telling her about his suspicions of the Bauers and his failure to convince anyone that they are spies.

Noelle offers to help. “I may know someone too. Someone in this line of work you are looking for. In fact, he works for your own State Department.”

Charlie agrees to meet with Warren Latimer, who is very interested indeed about what he has to say.

“I was elated. I felt vindicated. Someone finally believed me. Someone who could actually do something about it. And take this to the right people. People who could prove my suspicions. I left knowing I had done the right thing.”

Charlie is certain that the Bauers are a fifth column, a network of spies planning to commit some awful act. Warren Latimer had nonchalantly mentioned getting more evidence on the Bauers. Charlie decides on an audacious course of action: He will follow the Bauers the next time they leave their apartment.

It is the worst decision Charlie could make. He finds his evidence, photographs what he witnesses, but he finds that the Bauers have outmaneuvered him, manipulated him. In short, instead of the Bauers being a fifth column, the authorities will believe Charlie is.

What follows is fast-paced, heart-stopping action as Charlie races to save his daughter, his country, and himself. Author Gross never gives the reader a break, but piles on obstacles Charlie must overcome to do the right thing.

Although one is occasionally frustrated with Charlie’s failure to come to grips with his guilt over his brother’s death in the Spanish Civil War, and some of his questionable choices, Gross creates a character who is realistic in all his angst and naïve judgements. A thriller recommended for fans of the genre, and also for those who enjoy historical fiction.