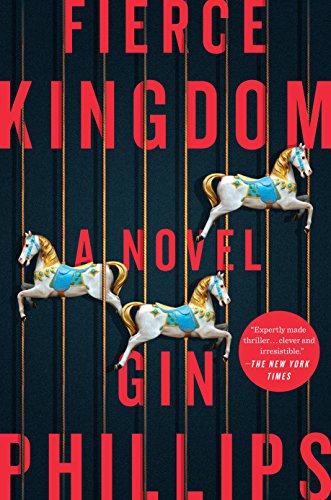 “Fierce Kingdom is a novel that crackles with tension and danger. . . . Do yourself a favor and devour this book before the inevitable movie premiere.”

A quiet October afternoon becomes a real life game of “how long would you survive?” in Gin Phillips’ latest novel, Fierce Kingdom. Joan and her four-year-old son, Lincoln, have a long-standing habit of having post work and daycare adventures. Their favorite hideaway is the wooded back corner of a tired and slightly grubby zoo, a place where Lincoln’s imagination can have full rein while Joan alternately participates in his play and daydreams. When a trio of homegrown terrorists invade their private world, Joan must rely on her wits and her intimate knowledge of the zoo to ensure the survival of herself and her son.

After a lazy and beautiful opening section, Phillips’ novel runs hot and fast, forgoing lengthy backstory and reflection in favor of action. Joan is a refreshingly vital heroine in an almost impossible situation: though she at first mistakes gunshots for balloons popping or “something hydraulic,” once she understands the situation she wastes no time with hand wringing or deer-in-the-headlights shock. She’s off and running.

Through a combination of Joan’s knowledge and strength, the narrative takes her and Lincoln through a nightmarish sequence of events in a very brief span of time—all of the action of the novel takes place in slightly over three hours.

Phillips proves herself a craftsman of pacing, dialogue, and characterization in this novel—all wrapped in prose that alternates between sublime description of the “haphazard strangeness” of the zoo and gritty realism: “If someone were trying to hurt Lincoln, she could splatter brains on concrete.” Joan has “a power inside her” that sets her apart from the stereotypical woman-in-peril heroine, an altogether realistic drive to protect her son that is independent of unlikely hand to hand fighting or MacGyvered traps or schemes. She is crafty and driven, and that is enough.

Lincoln is also rendered refreshingly believable. As seen through Joan’s eyes, he is a beloved but not perfect child, full of the fancies and follies of a bright four year old. Other characters, particularly the main villain of the piece, are also well written, showing as much growth as can be expected in such a short time span.

Woven throughout the story is a meditation on parenthood in its various permutations. Joan’s love for her son is fierce and solid, totally opposite of the benign neglect from her own parents as seen in a few brief memory vignettes. It would have been easy and expected for Phillips to present her heroine as a perfect mother figure, and some of the PR would have the reader expect such, but the author takes the much more satisfying tack of making Joan human.

She makes troubling choices as well as noble ones when it comes to the young characters in the novel. She must tamp down frustration and anger more than once, and her actions don’t always have a positive outcome. Creating a flawed heroine is an act of a brave writer.

Phillips also takes a chance in her characterization of her main aggressor. Robbie is a violent, angry man, inspired by the Columbine murders. Phillips avoids making him a one-note villain by allowing a peek into his sad back story, gives him moments of humanity amidst chaos, and yet somehow avoids giving him a pass on his behavior. He is irredeemable, and Phillips makes sure the reader knows that, but he is also broken.

In Fierce Kingdom, Phillips shows an easy mastery of language, telling her story with the wit and sometimes playfulness of John Irving or Margaret Atwood. Her narrative sketches of her surroundings and the way she captures everyday events and feelings evoke a sense of déjà vu—the reader knows these places and events instantly. The story moves briskly, only slightly slowed by Joan’s reminiscence about her own childhood, but the narrative paints clear pictures of what is happening.

Fierce Kingdom is a novel that crackles with tension and danger. The pacing is urgent, as befits the topic. It’s a keep you up all night speed race to the finale, with a subtext of the power of parental (not only maternal, despite what the jacket blurbs have to say) love that will leave the reader more than satisfied. Though marketing is targeted to women, this is a novel that does not deserve to be shoehorned into any “pink” category. No fancy (and usually silly) twists, no standard romantic angle (none at all, really, and Joan could just as easily have been John); this is a straightforward adventure novel. Do yourself a favor and devour this book before the inevitable movie premiere.