Fiber: The Coming Tech Revolution―and Why America Might Miss It 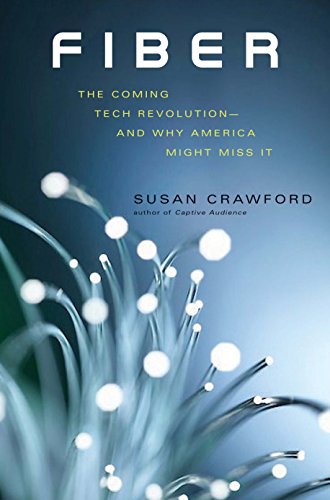 “If more and more actors enjoy fiber access, will the Internet be mainly a tool of the rich and powerful or will it level the playing field, an instrument of asymmetric warfare?”

Fiber is about power and, ultimately, morality. For power can be mobilized for good, constructive ends or for evil, destructive goals. It can accentuate the gaps between haves and have-nots or close them.

Author Susan Crawford is the John A. Reilly Clinical Professor at Harvard Law School. Her book analyzes the  basic infrastructure of the United States and the country’s failure to equip most of its citizens with the tools needed to meet the challenges and opportunities of the 21st century.

Reliable and speedy communication is not just a convenience but a virtual necessity in many walks of life. The virtually unlimited amounts of data that humans can send and receive through fiber optic connections can transform health care, education, urban administration and services, agriculture, and retail sales. The Internet is also transforming all branches of science, economics and finance, politics, and military readiness.

Having immersed herself in the legal framework of communication, Crawford has gone on to travel widely in the United States and abroad to learn how diverse communities cope with the challenges of modernity. Strange to say, the global leader in science and technology lags other countries in meeting these challenges. One might expect that large and influential communications giants would press to provide Americans with the best tools available.

Crawford finds, however, that the corporations that control Internet access in the United States use their tremendous lobbying power to tilt the playing field against competition and hold back infrastructure improvements and competitive pressures needed for the country to move forward. As a result, Crawford argues, the United States is falling behind countries in Asia and Northern Europe, particularly China, which is moving to ensure that 80% of all homes and business have cheap, world-class fiber communications in the near future.

Fiber optic connections are far more powerful than copper or cable. Even where they exist, they face a “last-mile” problem—connecting with individual homes and offices.

There are two approaches to connecting users and suppliers. A utility-based approach treats a last-mile fiber connection as essential infrastructure under a city’s legal control and required to reach everyone. The city controls when, how, and for whom the network is built and at what cost the wholesale facility is made available to private competitors offering their services to customers.

A demand-drive approach, by contrast, allows a private operator to wire only those areas profitable under its business model. For many decades the electrification of the United States followed the demand approach. As investors perceived demand, they funded municipal buildings and businesses first; wealthy urban dwellers next; then poorer urban dwellers; and finally rural homes and farms. Eventually, however, government interventions treated electricity as a utility subject to public obligations, available to all and at a reasonable cost. (Lenin in 1920 declared that “electrification plus soviets” [workers’ councils] would produce communism!)

Today, fiber optic Internet access is available to all residents in South Korea, Japan, Hong Kong, and Singapore. Sweden and other parts of northern Europe have high fiber adoption rates. None of these places has used a demand-driven model. Cities in all these places treat fiber access as a utility. Fiber connections are seen as a natural monopoly, one that any retail player offering to provide services may use. No one in these places thinks of last-mile fiber as a luxury available mainly to residents who can pay high rates.

Thanks to enlightened and courageous city government, American cities such as Chattanooga, Tennessee, and Wilson, North Carolina, enjoy high-speed Internet service. But they have been prevented from expanding such services to border areas by state legislatures corralled by major telecom companies. Fights happen over access to rights of way, or poles, in many places owned by AT&T or Verizon.  If a municipality does not control the access to poles, it has to negotiate with these companies to gain access. Incumbents, however, often find many ways to delay. Thanks to lobbying by AT&T and other suppliers, not even San Francisco has fiber Internet access for every residential customer.

The upshot has been chaos, even in the state of Massachusetts, home to many institutions of higher learning. Away from Boston, it has been every town for itself. A front-page story by Andy Rosen in the Boston Globe, December 31, 2018, told how in northwestern Massachusetts, the town of  Charlemont, a community of about 1,100 people,  got an offer in 2018 that might have been the answer to their prayers for a broadband connection. Comcast, in exchange for a subsidy from the state and local governments, was willing to build connections to nearly all of the town’s homes.

But residents handed the communications giant a collective “No, thank you.” At a Special Town Meeting on December 6, 2018, they voted to build their own $1.5 million broadband network—at an added cost of nearly $1 million over the Comcast offer.

Having treasons to distrust Comcast and Verizon, Charlemont voters decided to hire Westfield Gas & Electric, a utility that has helped several other towns build networks. Faced with a similar question, nearby Worthington could not muster a required margin of two-thirds to build its own system and decided in May 2018 to go with Comcast. For all these towns, however, the broadband in question was not fiber optic but cable.

Wireless will never trump fiber when it comes to capacity. Most of our devices are mobile and detached, but we need fiber connections close to those devices for the cascades of data those devices will generate to travel anywhere. Also, connections must be symmetric, with equal upload and download speeds.

Last-mile connections are expensive but could be seen as a much needed public good. But the federal government is another part of the problem. Designated chairman of the Federal Communication Commission by President Trump in 2017, Harvard law grad and former Verizon employee Ajit, Pai, has actively opposed city efforts to build fiber networks. As FCC chairman, he also closed an investigation into zero-rating practices by wireless providers T-Mobile, AT&T, and Verizon.

On May 18, 2017, the FCC took the first formal step toward dismantling the net neutrality rules, and on December 14, 2017, voted to reverse Title II regulations. In 2018 the National Rifle Association awarded Pai with the Charlton Heston Courage Under Fire Award for repealing net neutrality rules despite facing heavy public criticism.

Crawford’s analysis is corroborated by the Organization for Economic Cooperation and Development (OECD), which finds that the ten most wired countries are Denmark, Netherlands. Norway, Switzerland, Iceland, Korea, Sweden, Finland, Luxembourg, and Canada. Each of these countries has at least 29 broadband subscribers per 100 inhabitants. Denmark has 37.2. In comparison, the United States has 25.8 subscribers for every 100 inhabitants. The United States has more total subscribers than any other nation, but ranks 15th on the OECD survey.

All the top ten have a national broadband strategy. These countries consider broadband access a political priority and provide a framework for the Internet infrastructure. The United States does not have a comprehensive broadband strategy, leaving such decisions to corporations and utility companies.

How government can help bring broadband to all persons and agencies is illustrated in the online program “Broadband for All in Hong Kong” by Chaucer Leung, Deputy Director General (Telecommunications), Office of the Communications Authority, June 28, 2016.

As of 2016 the Hong Kong region had 25 fixed carriers for Internet service and 191 service providers. Very hilly terrain with very uneven demographic density sharpened the “last-mile” problem, but there was 84% household penetration, with average connecting speed of 105.2 Mbps, with charges ranging from about $18 U.S. dollars for 100 Mbps up to $23 for 1 Gbps. Most households could choose between two customer access networks.

Some people on outlying islands complained of weak, slow, expensive service, but steps were being taken to bring them full speed, reliable service at costs close to those for city folk.  Similar actions were recommended for all of China by the China State Council in 2013.  See its “opinions” on promoting fiber-to-home access to improve the level of urban and rural broadband networks (China News Network, August 14, 2013.)

Of course India is at a much different level of development from the United States and China, but the thrust of Crawford’s book is supported by another recent publication, which shows how accessible, low-cost communication technology is helping India. Revi Agrawal describes India Connected: How the Smart Phone Is Transforming the World’s Largest Democracy (Oxford University Press, November 2018).

Crawford’s book omits the downsides of Internet connectivity. If we can all download movies and enjoy “feelies” as in Brave New World, will anyone still read Shakespeare? Social media seems to contribute to anomie, depression, and suicide. It permits government-supported hackers to interfere in the politics of other countries. It helps identify the tastes and emotional states of potential customers. It bolsters the intelligence-gathering and military networks of international rivals, but it also enables them to paralyze and sabotage those of other actors.

The Internet also poses a challenge for students of power politics. Should we think of Internet connectivity as  hard power (meant to coerce), soft power (to persuade), or smart power (using hard and soft power skillfully)? If more and more actors enjoy fiber access, will the Internet be mainly a tool of the rich and powerful or will it level the playing field, an instrument of asymmetric warfare?