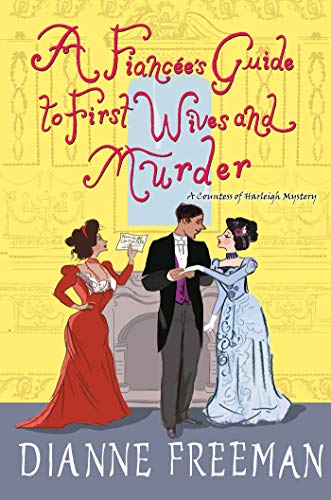 “A delightful tale of British turn-of-the-century manners in the face of a tragic crime as well as a light-hearted love story.”

Frances Wynn, American heiress and widow of the late Earl of Harleigh, has become engaged to George Hazelton, who is much more faithful and amenable than the late Reggie. In fact, George admits Frances was of great assistance during a recent murder investigation in which he helped Inspector Delaney of Scotland Yard.

The two are planning their betrothal party when Inspector Delaney appears with a young woman in tow. The young lady has been arrested for throwing rocks at the visiting Grand Duke Michael Mikhailovich, cousin to the Russian royal family, and his wife the Duchess de Torby. Michael has been banished from Russia for marrying the Duchess without the Tsar’s permission.

The young lady, Irena Teskey, is making myriad claims, each more absurd than the last: The Grand Duke is her cousin, she has received letters threatening her life, she has been abducted several times, she is either an actress and/or owns a theater, and the last, and most unbelievable—she is Mrs. George Hazelton.

“She stood with a fist on her hip, eyeing me with an insolent gaze. ‘Do you know Hazelton?’

‘Of course. I am his neighbor.’

‘And his fiancée,’ Alice added.

The woman narrowed her eyes. ‘Are you indeed?’

Although George admits he knows the young woman, and indeed, he did rescue her once from kidnappers, he states unequivocally that they have never been married and he hasn’t seen the young woman in many years.

“‘I assure you, Irena and I are not married.’

Across the room, my rival stamped her foot. ‘Yes, we are.’”

Before she knows it, Frances is offering Irena a stay in her home while the police and George investigate her claims. Then a Mr. Bradmore appears asking about Irena and stating he’s been looking for her for over a year.

“‘Do you have some information on the matter, Bradmore?’ I asked.

‘Indeed, Lady Harleigh. I do.’ He turned his gaze to Miss Teskey. ‘Irena, you seem to have mistaken Hazelton for someone else. He is not your husband. I am.’

Miss Teskey examined him through narrowed dyes. “You do look familiar.’

‘Indeed. This is somewhat awkward, considering I’ve just introduced myself as your husband, but I’m afraid I must ask you for a divorce.’”

With that, Irena flees the room, refusing to speak to Bradmore. He returns later in the day, but she still won’t talk to him. Later, when Frances looks for her, she finds the girl sitting in George’s garden.

Irena has been strangled.

George is the obvious suspect, but soon there are others, and the list of people who might want Irena Teskey dead is getting longer and longer: Bradmore, her business partner at the theater; her royal relatives; her bodyguard; some of the other actresses; perhaps her own father, Prince Alexei—or maybe her unknown mother’s equally unknown husband.

Meanwhile, gossip is mounting about George and Irena, aimed specifically at marking George as a murderous cad, and putting Frances’ own reputation in jeopardy if she decides to “stand by her man.” There are quite a few shocks in store as the two pursue their own investigation into who is the likely suspect to wish Irena dead—but the biggest one will come when they discover the actual murderer.

While this is a Victorian cozy mystery—in spite of there being a murder, there is very little actual violence—it is also a delightful tale of British turn-of-the-century manners in the face of a tragic crime as well as a light-hearted love story. Where today, she might be applauded for her faithfulness, in that era, Frances faced being ostracized by society, with her life and those of her entire family ruined because she doesn’t disavow George as she’s expected to do.

George and Frances make a wonderful team of investigators, mainly because George treats his betrothed as an equal, and doesn’t attempt to order her to stay at home, out of the way, while he goes about the manly business of discovering the murderer. Even Inspector Delaney admires Lady Frances’ investigative abilities though he somewhat deplores her inability to follow even the slightest suggestion of an order.

In a world where a husband ruled the roost, and a disobedient wife could be banished from society and punished like an unruly child, George Hazelton and Frances Wynn are a remarkable pair, and any story concerning them is a delightful narrative.

This is the fourth entry in the Countess of Harleigh mystery series. With its descriptive historical elements, as well as the addition of George and Frances’ courtship and their partnership in solving the crime, it’s definite entertainment.