Fetch You Later (Must Love Dogs) 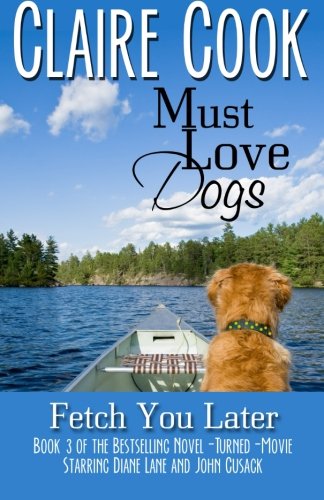 With book three of Cook's Must Love Dogs series the reader is again reunited with Sarah Hurlihy and her down-to-earth yet humorous family. The story commences when Sarah along with her sisters, Carol and Christine, rush to their childhood home to meet their dad's fourth or is it fifth girlfriend?

After their mother's passing, their father's choice of women escalates from the goofy to the downright wacky. They stumble into the house filled with boxes, and upon questioning their father, they learn his new love "Sweepstakes Sally" introduced him to entering and winning sweepstakes and contests. Of course, Sally doesn't show up, giving the girls more cause to consider this woman's plans.

Sarah soon leaves to meet her colleagues, Lorna and Gloria at the Bayberry Preschool where they are teachers. Summer is almost over and they want to prepare their classrooms for a new year. Sarah brings  some of the loot from her dad's winnings, such as disinfectant wipes along with other items she can put to good use. Though Sarah loves her job, neither she nor her friends care for the founding owner, Kate Stone, their boss and principal, whom they lovingly refer to as the "bitch"—but not to her face, of course.

Lorna is livid upon discovering she is assigned a different room from the one she's had and loved for years. It is now the province of a handsome new teacher, Ethan Buchanan. Sarah becomes suspicious of his and Kate's agenda when Sarah's teaching assistant is assigned to him as well. They believe Kate and he are lovers, only to later learn Ethan is Kate's godchild. So much for nepotism.

Next comes Sarah's boyfriend. She and John Anderson have been seeing each other for a while, though without a firm commitment. He works and lives in Boston, and Sarah, who loves her coastal town of Marshbury would never consider moving to the city or expect John to relocate to the beach. Therefore, they make do with occasional sleepovers and seem agreeable with the arrangement.

The many multi-dimensional characters offer charm and humor in this novel depicting an ordinary family. With their quirks and nuances they bring laugher and worry, drawing the reader in to become more than a bystander.

Billy, Sarah's dad is charming with his wit and loony yet affectionate commentary, such as: "What's cookin', good lookin?" and "Now where in tarnation did they put the thingamahoosie that keeps things private around here?"

Though the third book in Ms. Cook's series, one does not need read the previous two, but most assuredly will want to. Funny and heartwarming, Fetch You Later reflects Cook’s ability to inject comedy into everyday circumstances, supplying a remarkable and compelling read.