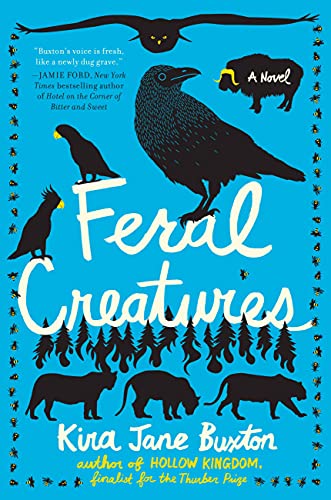 “A novel that is disturbing as well as heartwrenching with its look at the possible fate of mankind.”

Continuing his postapocalyptic adventures, the “obscenely handsome American crow” named S.T.—the “Cheeto addicted crow”—first encountered in Hollow Kingdom, has found a unique and precious creature in the land where only animals now dwell—a baby human he has named Dee.

“A tiny miracle with breathing skin and Cheeto fingers and a gorgeous bald head like a dove egg.  I had fallen in love with her in a way that made the world shiver with magic. It was the sort of love that rallies armies and makes one skip and caw in soprano like a helium-filled-filled eunuch. Just imagine—a tiny, silky-skinned nestling with no teeth and no claws. And she was the last. The very last MoFo on earth.”

With a parliament of fowls, specifically owls, he raises Dee, lavishing her with the love and affection she would get from her own kind if they existed.

It is only when Dee become a near adult that S.T. realizes the danger in the current existence of a human being. Dee may not have been around humans but she begins to exhibit some characteristics that are uncomfortably familiar.

Now a teenager, she is difficult to control, and adventurous to a dangerous degree. When she exerts her own will over her animal guardians and accidentally causes the death of a nest full of fledglings, S.T. realizes that in spite of never having associated with others of her own kind, Dee has  inherited some of their harmful ways.

“Dee now understood she was a violent creature, born of the most violent beings on earth. Destruction is in the marrow of a MoFo.”

The other animals, from whom S.T. has managed to hide Dee, have also discovered the last human on Earth, and they demand that something be done.

‘You keep the last human child.’

My beak dropped. I tried to recover quickly. “What? Pfffft. Don’t be ridiculous.”

The walrus made a rhythmic clucking with the back of his throat, that magnificent mustache rising and falling like the arms of an orchestral conducor. ‘You cannot hide the girl any longer.’”

Soon S.T. will have to make choices about his beloved Dee, but it is Dee herself who will make the final, most important one for him, when Nature and Nurture come into conflict and solve the problem for all.

This is a novel that is disturbing as well as heart-wrenching with its look at the possible fate of mankind—minus the talking animals, of course.

Full of avian puns and double entendres, lavish description, and philosophical remunerations, this is a tale that should cause the thoughtful among us to consider its ramifications.  Is it an allegory, a warning, or simply a vast flight of fantasy?

Feral Creatures is a story that will rest uncomfortably in the reader’s psyche, especially during these current unsettling times, as perhaps a portent of things to come.