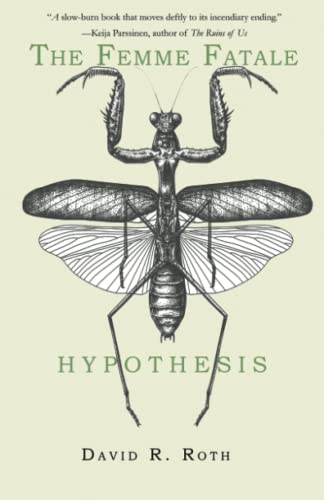 In the compactly rich novel The Femme Fatale Hypothesis, author David Roth presents three equal protagonists and places them in an urgent, and at the same time leisurely, path to and through a life-and-death crisis. The result is as illuminating as it is heartbreaking. These are characters who can be neither ignored nor forgotten.

June Danhill is a middle-aged widow. Her son and his family have moved away. She lives next door to a couple with whom she has had virtually no interaction over the years. Until now.

Her neighbor Kelsey Geddes (sometimes called Kel), also middle-aged, is a professor with a very sick wife named Rose. Rose has been dying of cancer for two years. When this trio begins to interact, the end of Rose’s life is in sight.

Roth heads each chapter with a title and a timeframe. The first chapter is set on a Monday, specifically March 2. The final chapter is dated Friday, June 5. Three months, equaling multiple lifetimes in the shared world of these three people.

Roth effectively separates each chapter into sections, changing the focus from one protagonist to the other in some sections, and weaving them together in others. This creates, in a novel that leans toward the shorter side, a rapid and thorough knowing of this married couple dealing with impending death and this woman who has known the loss of a spouse.

Rose spends a lot of time in bed. Kelsey cooks her meals and brings them to her on a tray with a flower. He calls Rose mia principessa. He is trying hard to be a good caregiver. He is also beginning to lose the sharpness of his mental faculties. Seeing this diminishment in her husband of many decades is a cause of great concern for Rose. How will he survive without her?

Rose has a photograph of her father next to her bed. She speaks to him often in her thoughts. He was a ne’er-do-well womanizer (“We can’t resist a silver tongue attached to a rattlesnake heart”). When he was dying, Rose helped him to take his own life by handing him a bottle of pills and a glass of water. She was charged with assisting in a suicide; the case was ultimately dismissed.

Even in the face of relatively imminent death, life continues. Kelsey is writing an academic paper titled The Riddle of the Femme Fatale Hypothesis (“The Femme Fatale hypothesis suggests that female mantids may be evolutionarily selected to exploit conspecific males as prey if they—the females—will benefit nutritionally from cannibalism.”). Rose reads his drafts, not always with positive feedback (“It will help insomnia—if that’s your intention.”).

June, a retired teacher, hires boys in the neighborhood to help her with yard work. These young men will figure prominently in the story as significant secondary characters (there is virtually no chaff in this novel). Kelsey observes June through his window and begins to pay attention to a neighbor who has been a stranger for years:

“While his own world has become grim and increasingly insular, Mrs. Danhill long ago emerged from her mourning for her late husband and has created a lively diorama . . .”

Roth calmly presents the details and the daily conversations of a long marriage—and the underlying urgency made tragic by the timeline of cancer. His characters are fully formed and layered in their contradictions. Rose’s thoughts can be poignant and acerbic. She agonizes over leaving her Kel, and then she sums up her life at the end with: “Eat, shit, sleep. This is a fine fucking romance.”

June has rebuilt her life after her husband’s death, but his absence aches. She keeps up the ritual of brushing her hair before bed, something her husband used to do for her: “They would talk about the day, about tomorrow, and she would close her eyes, allowing herself to enjoy the traveling tingle of the soft bristle, wave upon wave of always tender strokes, soothing and nurturing.”

June is a regular churchgoer. One Sunday after a sermon, when she returns home she hears Rose ringing a bell in distress, a call for help which is going unanswered. June goes over to their house to rescue Rose. So begins a vast shift in the lives of the widow, the husband, the dying wife.

The theme of marriage throughout the novel is accompanied by the theme of offspring. Rose couldn’t have children because of a horseback riding accident. Kelsey plays squash with an old friend whose daughter was murdered, a tragedy which resulted in the girl’s mother, a close friend of Rose’s, severing their relationship because it was too painful to continue. When June receives flowers for Mother’s Day from her son, she shares the bouquet with Rose.

Rose asks Kelsey to invite June to visit when he is out of the house so she won’t be alone. These visits result in Rose feeling better and more energetic. A friendship grows. And Kelsey finds himself feeling awkward around June even as he is attracted to her.

Rose is rallying, but her end is inevitable. And she is not one to be passive about this. In a painful exchange, she asks for June’s help, help which June feels she cannot give. When June suggests that Rose can choose not to eat the food June brings to her, implying that she can end her life by starving, Rose responds with an argument that is hard to refute: “Starving’s too slow. Too hard. If I were a dog would—you starve me?”

Roth at no point shies away from the cruelty of loss and the pain husbands and wives can inflict upon each other in the face of this loss. No one is innocent in The Femme Fatale Hypothesis, no one is to blame. These are three people brought together by the most challenging of life’s experiences, to an ending that is surprising, inevitable, devastating.

Readers who have not lived this kind of tragedy, as much as those who have, will find a humanity within the pages of The Femme Fatale Hypothesis to stir the heart.